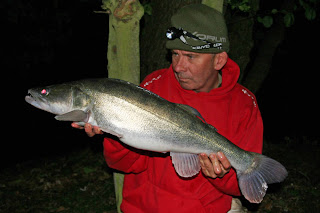 Earlier in the week when l returned home from Old Bury Hill after a successful zander trip with my father and brother, l reflected on the October before and remember just how manic these sessions were. Often it was difficult to get two rods in the water, yet our first session this season, although steady was far from manic.
It had to be an off night, one when the clear sky stopped them from going mad or was it that the sprats were just not as good as the sardine? 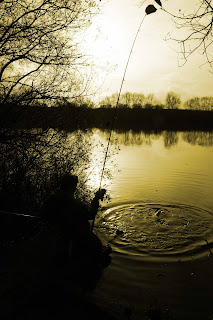 Eager to get back, l grabbed the already made up tackle, along with some frozen down sardines and headed back. The weather was perfect, too perfect in fact with a south easterly wind gently pushing into the swims midway along the long bank. The atmospherics were also good, around a thousand millibars and as for the temperature; well it was almost tee-shirt weather. The best factor thou was the heavy cloud cover and with rain forecasted for around ten my intension was to fish as hard as l could until this arrived.
Arriving at 4pm l dropped into a swim that has a knack of producing a few big fish and cast two sardine sections out at around twenty yards. A few small fish and the odd carp moved which lifted my confidence and after ten minutes the light bobbin on the right hand rod slowly headed skywards. A firm strike and a heavy head shake created a feeling of satisfaction, however the desired species, zander, failed to surface, instead it was an over enthusiastic bream. It wasn’t long before the same rod was away and this time it was from my desired species, one around five pounds.

If l have one rod producing then l will cast the inactive rod after each capture, as this often produces a run, yet tonight, even after trying this, it was the same rod that kept springing into life. Amazingly nine more zander came to this rod, before the left hand rod eventually signalled a bite, however as soon as l lifted into the fish l knew it was far bigger than the others that were mainly in the five to seven pound bracket. If anyone hasn’t fished for zander using 1.5lb rods then l prompt them to try as hair-rigging and playing big fish on such balanced tackle is a joy and the way this fish was taking line and staying deep l have to say felt as good as it gets. A few anxious headshakes just out of reach of the waiting net created some nerves but eventually in she went and as l looked down l thought that l might have my first double of the season; however the scales dropped slightly short at 9lb 7oz. One more zander came before the skies opened and the rain descended, yet this did little to dampen my spirits as twelve zeds and a bream in around five hours is some going. 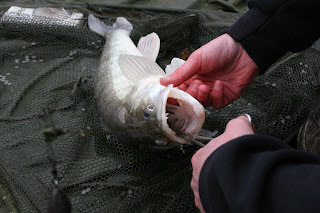 As with the majority of fishing, as the winter sets in the zander fishing toughens up. Autumn (Oct and Nov) is by far the most productive months, with the last two weeks of the season, March, not far behind. If you fancy an after dark session for zander then you need to get in touch soon as this week l have taken six bookings and with dates limited and maybe things changing in the future, you might just miss out.