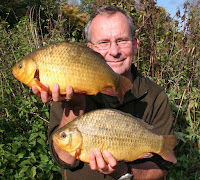 The fun of fishing!
I’ve just returned from a day at Godalmings Johnsons Lake where my brother and father decided to challenge myself and fishing mate Chris Petter to a match! Fish caught were awarded points, crucians 3, tench 2 and carp and anything else would be classified as 1.
We decided to give ‘Team PM’ a head start and arrive at 7am; however Chris and I were alone and with the wind pushing into the railway bank headed there. Now this year I’ve found that this bank has been somewhat ‘hit and miss’ with the shallower swims being more consistent so wasn’t exactly brimming with confidence. ‘Team PM’ after a healthy full English, shower and read of the newspaper arrived an hour later; however nether I or Chris had managed a bite. Team PM had fished the day before and thinking they would be prepared with rods ready to go was wrong, it was what can only be described as a walk in the park for them, they must be confident.

Third cast, it always happens on my third cast, the alarm sounded and a three pointer graced my net, a 3lb 8oz crucian. Then the unexpected happened, Kevin was away and the scores were level. Things then didn’t look good as Kevin started to get liners, or was it just his slack lines, wonky set up that had us on our toes! Obviously not as once again he was away with another near three-pointer however his little 2ft 6’ landing net pole failed to secure the points and we, as you can imagine, swamped him in sympathetic words! I’m not too sure how things progressed after this yet come lunchtime I had landed a further two crucians to 3lb 9oz, Kevin another two to 3lb 9oz, Chris sat in between us and in the flyer had only managed two tench and Dad at the end a single tench.

So as you can see one fish divided us and it was all to fish for come the afternoon. Fortunately I managed a quick fire brace of crucains weighing 3lb 6oz and 3lb 8oz, Kevin’s swim had died, Chris was still struggling but at the end Dad was on a roll with a 3lb 12oz crucian then the same tench twice. Basically he caught one with an unmistakable mark under its chin, returned it only to land the same one just minutes later, it happens! Kevin then awoke from a deep sleep and bagged a tench, yet it was another 3lb 8oz crucian that clinched it for us and with myself and Chris landing a tench apiece close to packing up the match was well and truly ours.
Looking forward to another challenge and a couple of thirst quenching beers!