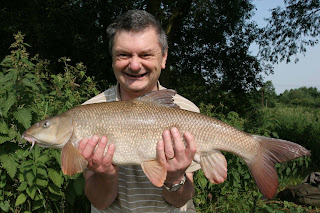 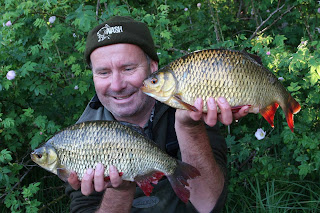 After fishing Friday night I was hoping to grab a few hours sleep on Saturday but having a couple of recent birthdays found myself heading out for a meal so had to keep going till the evening.
Sunday was all about catching up on the weekly paperwork which seems to take forever along with cleaning the kit down and reorganising it for a week of guiding.
I was looking forward to Monday as I had promised to take young Jake to Frensham the previous year and with the weather being kind to us and exams out of the way we were both able to relax and focus on catching a few tench. Meeting at 4pm we headed to what’s called ‘The Oaks’ a popular swim but one I had never fished before. The wind was from the North West which was great as it was pushing gently into our faces. Tactics were to fish two Helicopter rigs in the hope of tench and rudd plus a rod with an inline maggot feeder, short braided hooklink along with a size 12 hook carrying a hair on which three plastic maggots were fixed. This was really to try and overcome a phobia I have on just using plastic. After spoding out plenty of groundbait, maggots and hemp we sat back to await the response and as so often with Frensham it didn’t take long as a tench ripped of with one of the Heli-rigs. This happened so many times that it was obvious real are better than fake, yet the rod was still cast as often as the other rods to try and gain a response. Eventually it happened yet I was so shocked that I dropped the fish, obviously another tench. Chris my tench companion joined us come the evening and also tried the more traditional inline maggot feeder set up yet with Jake regularly catching on the helicopters soon swapped come dusk, just as Jake found himself slipping the net under a big tench that weighed 7lb 1oz, a new personal best by some margin. Action slowed come darkness and come 11pm we had all settled down, yet the rods were left out and it was the plastic maggots that started to receive the bites and amazingly these were coming from rudd, five in fact, the biggest going 2lb 6oz. By 1am I was feeling the pace and decided that as the rods went of they would be left in so that I could grab some sleep. Two tench fell in the night which left one rod that hadn’t received a bite. Casting all three out at 5am saw them all rip off in the first half an hour, proving the importance of casting regularly. Jake finally awoke an hour or so later, just as Chris was packing away and went on to land a few more tench including another weighing 7lb 1oz. Our final tally was 18 fish, not a bad result.
Back at home the standard two hours kip was followed by sorting the kit out as well as sorting out the barbel tackle for a guided trip with another customer on a difficult stretch of the river Loddon the following day but not before having to attend the end of term Proms and taking some pictures for my girlfriend’s sister. 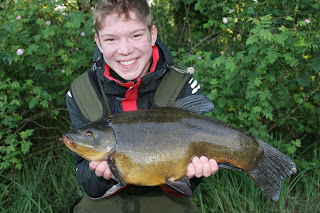 After dropping the girlfriend of at 7am I headed to the Loddon. The weather was bright, not ideal conditions yet after meeting my customer at 8am and heading to a favourite swim he soon found himself attached to a big barbel which weighed 10lb 11oz. In fact it took just twenty minutes to get the bite and once again the ‘pellet-lead’ proved its worth. We roved the river for the around another seven hours for just one more bite, a chub of 4lb 12oz which might not sound good, but on this stretch one bite a day is classified as a result. It was whilst fishing the swim where the chub was taken that a number of good fish rolled, so many in fact that I stood and watched the river, eager to see what they were. My suspicion was that they were bream, maybe barbel but they were neither, not even chub, in fact they were tench probably in spawning mode. 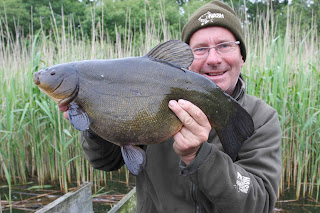 Thursday I was up early, 5.45am and once again headed to Frensham to meet Jake in the hope of catching a few tench on the float. With the weather bright these were always going to prove hard, yet we did manage one early on. Once the sun was up it was all about casting the feeder rods out and come 4pm a few tench to 6lb 8oz had come his way. With Jake leaving at 4pm I had another customer joining me and having never fished the venue before and being an avid barbel angler I hoped that Frensham would deliver. Unfortunately the weather turned for the worst and what was supposed to be light drizzle turned into heavy and persistent rain. We did try fishing the float but gave up at around 8pm with just a few missed bites to show for our efforts. I had cast a feeder rod out and this had ripped of four times during the evening and thoughts were of a big hit but the swim died come dusk. At around 9.30pm the rain stopped and we tried the float once more. I received two bites, one was a rudd around a pound the other a tench weighing exactly 8lb! With very few bites coming we decided to grab four hours kip before commencing our efforts come 4am. The weather was slightly better and a few tench finally started to show. We both had a feeder rod out as well and come 8am Alan had landed six tench including a personal best of 6lb 5oz. I had a few also and although the big rudd that we dearly wanted failed to show we left well happy as how often does a tench of 8lb fall to the float as well as your customer walking away with a p.b! I was in need to sleep later that day but amazingly also needed to get on top of a weeks worth of paperwork and housework and finally hit my bed at around midnight after picking the girlfriend up after the evening shift.
Posted by Unknown at 02:49