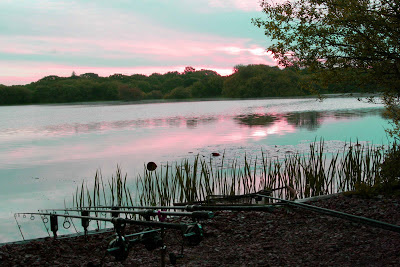 Another annoying bank holiday means I have to wait to Tuesday night to get the rods out, yet after being away all last week at least it gave me time to get up to date with article writing and answer questioning.

I have to admit I have really missed the solitude of fishing alone and was glad to get back to the tench lake, yet my fishing was rusty to say the least and I was amazed just how, out of routine I had got. Casting, baiting, rig making, even playing fish at night all seemed somewhat alien, or maybe I was just having a bad night. Luckily though the tench were feeding and five graced my net throughout the overnight session, all males around six pound. It was a testing night as the rudd, roach, even a small bream were constantly plucking at the baits and occasionally falling foul to a hook in the bottom lip. My mate Chris has also been getting some action at last having taken a few tench, again not of the size we were hoping for, mostly males around six pound, plus an 11lb 8oz bream and a couple of carp, the biggest 26lb. Obviously the groundbait inclusion into our baiting routine has made a major difference. I would have stayed later than 8am, yet by then the sun was up, the temperature rising and the wind struggling to make its mind up which way it wanted to blow from and with small fish constantly attacking the bait it was time to leave.
Back at home I had to grab a few hours’ kip and to be honest apart from a few bits of paperwork wasted the whole day, more reason to leave the frustrating nights alone. 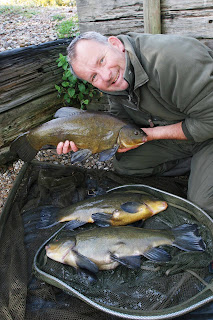 Thursday dawned wet and windy which was a blessing actually as instead of the early morning round of golf with my mother found myself tucking into a few things that I have been putting of. Come 3pm I felt rather refreshed and decided to head back to Johnson’s in the hope of a crucian or two. On arrival at 5pm I had a brief chat with Phil Smith who reinforced what Mike Townsend had told me the previous week – the lake was fishing tough and the crucians had spawned. Undeterred I headed to an area less popular with the crucian anglers and within half an hour had a 3lb 5oz crucian in front of the camera, yet come 8pm all that had shown was one tench. I continued to 10.30pm for one more crucian again 3lb 5oz plus two small tench, yet with a horrid north wind and loads of water flushing through the lake it was obvious things weren’t going to happen and happy with my result headed home. On route I stopped of at Farnham Golf Course where I crept around on my knees for an hour collecting lobworms and with 100 in the bucket for a catfish attempt on Friday night finally fell through the door around midnight in need of a big glass of red. 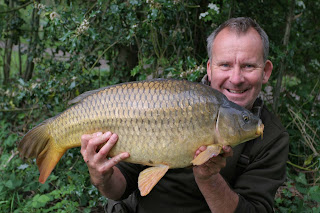 Friday dawned clear and hot and with temperatures rising to mid twenties myself and Steve felt it was just reward for spending wet and windy night at Badshot Lea Big Pond in search of catfish a few weeks earlier. Arriving at 4pm I instantly realised that it was half term, joy, and with most swims occupied finally settled, once again in a corner of the lake, yet this time the north wind was pushing right into it and with a carp crashing on arrival felt confident of a few fish. Steve fished the helicopter rig in the hope of a few tench yet his swim was full of bream and perch. I decided to drop a boilie up against a snag tree as well as fishing a rod on a helicopter rig with maggot on the hook. It didn’t take long for a 17lb common to pick up the boilie and a 6lb 2oz tench to find the maggot. Two more doubles came as well as two more tench plus a few bream before the worm rods were flicked at dusk. Loads of bleeps proceeded as well as two screamers that were missed and come the morning Steve had landed two kittens with myself taking one. The morning proceeded in similar fashion with two more double figured carp coming to the boilie before the session came to a close at 8am. The only downside to the session was once again the north wind that seem to increase as the night went on. I started the session in shorts yet come the morning wish I was wearing thermals! Badshot Lea Big Pond is a great place for a mixed catch, yet it is very temperamental and it’s worth following the wind if you want to catch. Unfortunately I think it’s my last session on the lake this year as it’s now two busy with bait boats everywhere and tent pegs constantly being banged in with mallets. How my feelings have changed over the last couple of months, as in March and April it sees very little pressure and I love the venue, yet as soon as the sun comes out along come the fair weather anglers more interested in getting away for the weekend than catching fish, time to leave it alone.