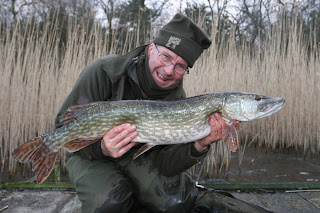 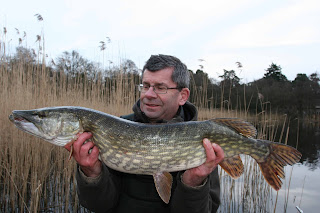 After a dismal week I was hoping to get off to a good start this week and although the session on Saturday morning did produce a fish, it wasn’t a monster, yet I have to be glad of every one that graces my net at the moment. Arriving before dawn once more I soon had two deadbaits positioned. A cold northerly was cutting across the lake and the chilling 3 degrees registered on the cars dashboard was dropped a few degrees due to the chill factor. It didn’t take long for a bite to materialise and if this pike was lost I would have sworn it was twice the size it turned out to be, 10lb! Two more runs came over the next couple of hours, yet both were annoyingly missed which is frustrating considering the lack of action that I have seen of late.
Sunday I was once again pike fishing, this time though I was guiding and hoping to demonstrate using a drifter float, yet on arriving at Frensham Small Pond I was confronted with a packed car park. I think I counted ten other anglers, some carp fishing but mostly pikers and with limited areas to fish we set up on the main beach, yet with a carper to our left the chance of drifting a bait wasn’t an option. Two runs came during our short four hour stay which produced one small pike and looking around I think we did well as I didn’t see another pike landed.
Monday morning I was back pike fishing. After dropping the girlfriend off I was casting out around 7.45am and with a warm south westerly blowing thought that action wouldn’t be long in coming, and I was right, however it was the same double that I caught last week that intercepted my popped up sardine. Come 9.30am, and with no further action I called it a day as I needed to check out a fishery for a perch guiding trip on Wednesday as well as sorting out some paperwork and organising the tackle for a return to the lake I’ve been prebaiting. Once again the after dark session produced absolutely nothing. I am beginning to think I’m chasing ghosts at the moment so its time to knock it on the head for a couple of weeks, but I will be back. 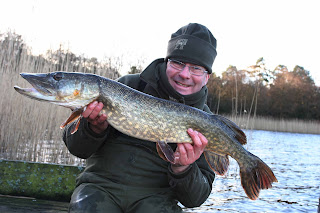 Tuesday was my first day without a few hours fishing for a while, a day of recuperating as I was feeling knackered, yet I still completed some photos for a predator article along with organising the perch kit for a day’s guiding at The Royal Berkshire Fishery the following day. 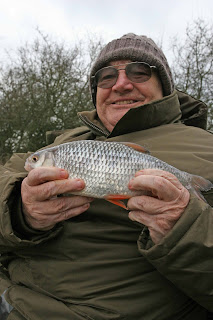 Wednesday dawned raw with a chilling north wind and temperatures of 3 degrees. Arriving well before my client I spent time building a swim next to some snags with chopped worm, prawn and red maggots as well as casting a sleeper rod out with a juicy worm on it. This rod took just two minutes to spring into life from a double figured common, so not wanting to ruin the chance of another decided not to recast. Ron arrived and we settled down for some close in float fishing, yet every time the float sailed away it was from a quality roach, not the desired perch, yet Ron was happy with roach to 1lb 3oz. The sleeper rod saw two bites coming to it, both were missed, yet one was due to the line catching on one of the cushioning pads in the recess that takes the rod on my KXi alarms. Bite alarms are meant to catch the angler fish, not loose them fish and as this isn’t the first time these alarms have cost me a fish they have now found the bottom of my dustbin! A few bites were missed later in the day, yet we were up against the elements and I will be trying my best to get Ron out before the end of the season during one of my perch sessions. 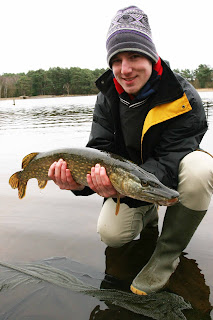 Thursday I wanted to see if the swim I've been catching pike from would produce during the afternoon. I teamed up with brother Kevin and set of arriving at the lake around 2.30pm. The only run came to one of my brothers rods and once in the net I instantly recognised the pike as the same one that I've caught twice before. To say this ones friendly is an understatement.
Friday I decided to try a different swim on the lake as id seen a few fish moving as we packed up at dusk the evening before. One rod was out with a deadbait, the other on a helicopter rig and maggot. The first and only bite came on the deadbait and after a spirited fight another low double was landed. This rod was swapped over at dusk to a helicopter rig and fished at range yet come 8pm and with hail stones falling I called it a day.
Posted by Unknown at 02:10