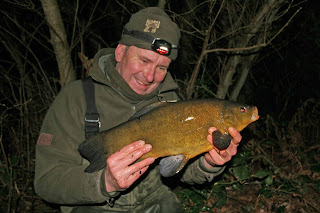 A quick look at the weather shows the start of the week to be very cold with snow forecasted on Monday and a chilly day Tuesday so both of these were spent producing yet more European predator articles, this time on critically, slow sinking and popped-up deadbaits. 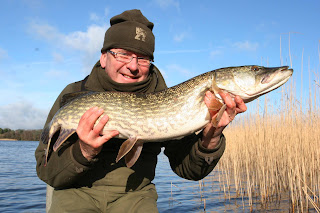 The rain/sleet forecasted for Wednesday is forecasted to come in late afternoon so knowing that the river Wey was at the top of its banks on Monday and would now be fining down felt that I might just get conditions spot on. Arriving at 8am I found the river lower and clearer than what I would have liked, yet knowing the fish would be hungry headed for my favourite swim. Setting up with a 13ft float rod, 5lb mainline, a 2.8lb hooklink with double maggot on a Kamasan B525 under a 5x4 alloy stick I soon found myself having to scale up as the first three trots saw fish lost from hook pulls. The flow was certainly faster than first anticipated so a size 16 Drennan Super Specialist was tied on to the 5lb mainline. This did the job and although more fish than I would have liked were lost, mainly due to the unforgiving nature of my closed face reel, nineteen chub were landed ranging from 8oz to 3lb along with twenty-eight net dace to 10oz and three wild brown trout, Fifty-one fish from one swim on such a tiny river is amazing and just goes to prove the importance of getting the conditions and location spot on. It was one of my most memorable sessions on the float for many years, certainly not as easy as some may think with nearly all the chub coming first, then the minnows became a problem so I upped the feed and made sure that my hookbait headed downstream bang in the middle of these. Once this change was made the dace responded yet they were much further downstream in the shallows than the chub, probably due to them being spooked. I could have caught more, but I had only taken three-quarters of a pint of maggots with me and paid for three-hours parking, yet with a mixed catch of over 30lb in the net I left thinking that the barren spell might just be a thing of the past. 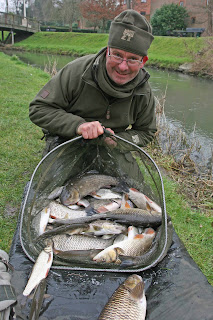 Thursday a warm weather front descended on the country bringing heavy rain overnight yet after dropping the lady of at work I found a few hours to cast out a couple of popped-up sardines in a local lake. I only fished three hours and should have recorded three pike, yet two runs were strangely missed, the other producing another good double. The reason for the short session was I had planned a whole days perch fishing with my father on Friday so had to get the tackle and bait sorted, yet during the hours of 4pm and 7pm I started to get a painful ear and having lost so many weeks last year with ear infections took no chances, cancelled the outing and headed to the doctors first thing Friday morning, returning with another dose of Penicillin! Fortunately the ear hasn’t got any worse so with the weather nice and mild I headed of to a local lake for what might be my first whole night in ages. Arriving at 4pm I managed to get both rods marked up at the same distance as the spod rod and after depositing some hemp and maggots dropped helicopter rigs over the top. Darkness arrived yet nothing happened, so instead of working the rods I decided to leave them out until some action came. At 8pm both rods are away, the first was a small fish that came adrift, the other a lovely winter tench. Four more fish followed, yet due to somebody creeping around behind me I felt unnerved and decided to call it a day at 10pm. To be honest I was happy to get home, but gutted to have to cut short what could have been a good session, yet with the ear still painful and the temperature dropping below freezing, I probably did the sensible thing. 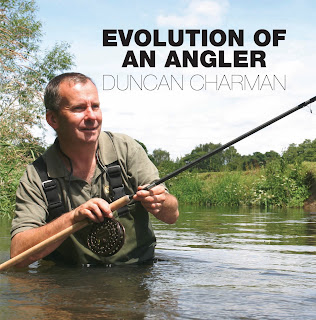 Next weekend 23rd/24th February sees another major fishing show open its doors. This time it’s The Big One at Farnborough Airfield. I will be attending and working on the Nash Peg One stand where I will have a few signed copies of my book – Obsession of an Angler so if you haven’t bought one yet, then popped down for a chat.
Posted by Unknown at 02:43