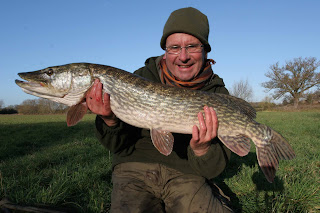 After an eventful Sunday night, which saw the girlfriend suffering with a stomach bug and myself having a restless night on the sofa, I as expected arrived at the river far later than hoped. In fact I could have so easily returned home and gone back to bed, yet after feeling under the weather myself over the weekend, really needed to get some fresh air, even if it was only for a couple of hours. 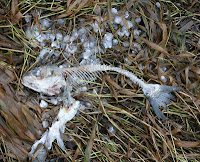 For years I have had heard reports of big pike coming from a local river and knowing the stretch well decided to give it a go. Thinking about the stretch, I asked myself the question, if I were a pike, where would I live? The answer to this question led me straight to one swim. I would have loved to have been casting a line at dawn, yet as previously mentioned I arrived late so positioned two sardines with the heads cut of into the swim. Looking at my watch it was 9.15am and with the bright sun failing to reach the pool felt confident, yet thirty minutes past uneventfully. I planned to fish the swim only for an hour before moving to my next position as in the past; I know if a pike is hungry it will probably struggle to resist this easy meal. I have also learnt that by repositioning a bait, bites can come soon after; however the first rod was snagged. Luckily I was using 40lb braid so simply pulled slowly until the trebles bent straight. Placing this rod on the ground I cast out the other rod before bending back the other rods trebles, yet half way through the process the backup indicator, my bite alarm sounded. Tightening the clutch I made a short sharp strike and found the rod tip hoop over, yet whatever was on the other end was very lethargic and after an unspectacular fight lowered the net under a very good fish. If the body matched the head, this pike would have well made twenty but having an empty lean body she fell a couple of pounds short. I never like it when a pike gives up so easily and always make sure to have a good look inside its mouth as sometimes a trace can be found blocking its throat but this one was clear. I must have taken her by surprise. Having made very little disturbance in the swim I decided to ignore the second swim and fish on for an hour, however no more action came, yet having not fished the river for pike for, probably fifteen years, it was a great welcome back.

The following day I had a customer booked in who wanted to try and catch a two-pound roach, however overnight the temperature dropped to a chilling minus four, in town, and when the customer knocked on the door at 6am I questioned our sanity. With an hours drive on icy roads ahead and with a very good chance of the venue being frozen we decided to check out a local lake and as expected found it to be frozen. Plan B was introduced and we once again headed to the river with a couple of pike rods as well as a chub rod and a ball of cheese paste, however come dusk neither of us had managed to get even the slightest of indications.
Wednesday arrived and being the 12/12/12 it had to be the busiest days of the year for wedding photographers and having to arrive at the hotel at 8am it was once again an early start. The day went well, however it was around 10pm when l arrived back home and come 1am and having polished of the best part of a bottle of red I hit the sack, well and truly looking forward to a lay in.

Thursday was all about backing up fishing images so that my computer speeded up, ready for a few hundred wedding images to be downloaded. A quick look at the barometer showed the atmospherics falling rapidly that evening and with temperatures rising overnight and a band of rain arriving, I decided to head to the river come first light on Friday armed with a pike and chub rod. To be honest, if I had had time to think about things, I should have waited for the warm wet front to arrive, then head to the river during the afternoon with a barbel rod, yet the rash decision had been made and I arrived once again at the crack of dawn. The rain hadn’t arrived and although the air temperature was a warming seven degrees I sat at the pool feeling that this change wouldn’t have awoken the pike and that the river would still be very cold. An hour past and after repositioning the bait a couple of times decided to try my luck with the chub. Moving downstream and with a few slices of bread in the bag I made a cast into a almost certain chub guaranteed swim and sure enough just two minutes later had a modest chub in the net. Having ruined that swim for a monster I headed downstream and in my third swim once again ruined my chances of a whopper with another three pounder. By now the rain was hammering it down; in fact it had been hammering it down since I swapped to chub and having covered all the hotspots headed home in time for a delivery of winter clothing to check out from Anglers Mail. On route back to the car I checked out a big dead chub that I had spotted on Monday. Back then it was fully in tact, yet just five days later had been stripped to the bone. I don’t think this chub had been killed by anything, as it showed no sign of this on Monday; however that same day I had watched a big mink on the opposite bank and could see how an angler could have mistaken this for an otter and put two and two together. The sad thing about this chub is that it had to be one of the biggest chub, if not the biggest chub on the stretch, a sure six pound plus fish in its prime and knowing that each year the numbers of chub are dropping, worry that in a few years time I will be fishing for very few big fish. 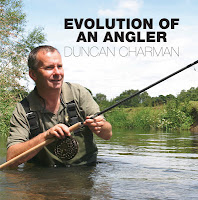 Saturday I will be spending the day at Yateley Angling Centre, signing my first book ‘Evolution of an Angler’ so if you want a copy signed; you know where I will be.


Top tip and lessons learnt.
Anyone that has read Terry Hearn’s books will know how he goes about sussing a venue out. Similar to myself, he uses watercraft to dismiss a very large percentage of the venue. He will then try and think like a fish and imagine (if he can’t see them) where and what they are up to in the remaining area. A stillwater is similar to a river and in the case of locating Mondays pike; I to dismissed a very large percentage of the river, using watercraft and my instincts to place me in the right place.
So the top tip this week is get to know the venue you are fishing and the lesson learnt is, it only takes a second to get a bite and there’s plenty of seconds in an hour!
Posted by Unknown at 12:10