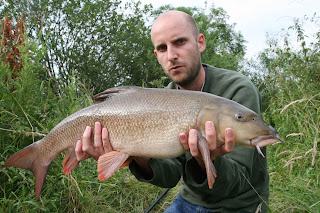 THE RATTLE BEFORE THE WACK!

With the river season well under way and the barbel and chub having recovered from their spawning ritual it seemed the right time to reveal a simple gadget that has revolutionised my barbel fishing, one that has replaced the pellet-lead, a method I thought could never be bettered.

Regular readers of CAT will recall a mini series that I produced for the magazine early last year on this devastating method and if you haven’t read them then I urge you to order back copies, issues 137, 138 and 139 as these will give you an insight into such a simple but effective method. It’s amazing how things can change in little over a year but every now and then a product hits the shelves that just cannot be ignored and the product I’m talking about is the Deliverance Ballmaker from Nash Tackle. It’s not just the Ballmaker that creates this incredible edge over other anglers, and I’m now talking about the latest version with the slot down the side, but the Ballmaker pellets that have been specifically created to accompany it.

Before revealing this new product lets just remember the pellet-lead and discuss the few problems that many anglers experienced. First the pellets that were compressed around the lead needed to be prepared in advance of each session usually by pouring boiling water over them the night before and again before leaving home. If the pellets weren’t prepared correctly then anglers found the compressed ball breaking up on impact with the water, something that did exactly the opposite of what the method was trying to do, place some bait above your hookbait on the river bed. The problem was then usually solved by compressing the pellets far firmer than needed around the lead, a process that failed to get the pellets falling off the lead as they should have, in individual particles. Some anglers perfected the method and proceeded to take small rivers like the Kennet and Loddon apart, yet many failed and reverted back to using PVA bags usually attached to the hook. Another disadvantage is that it seems that many anglers are now using the method, rightly or wrongly and on some stretches the barbel have cottoned onto what is danger, so what was such a brilliant method for me when first introduced has certainly lost its edge now.

Always wanting to be one step ahead of others I looked long and hard for a better method and it was whilst attending a Nash Roadshow that I was shown the initial Ballmaker which simply made perfectly round balls of groundbait or pellet. Initially this gadget didn’t trigger my brain into gear regarding my approach for barbel as I was overwhelmed with its uses for tench, bream and carp, however even then I could see that if a slot was cut down the side then I could place not only my hookbait but also my hook within an irresistible ball of bait. It was only when I started to take local carp commercials apart using it that the penny dropped and all my prayers were answered as here was a product, or a couple of products that could give me a massive edge over others on my local rivers.

Although I was chomping at the bit to give it a test run its first use was whilst guiding five anglers on a Farnham Angling Societies barbel teach-in on the river Loddon. An angler called William, who had never caught a barbel before, was the lucky angler to first lower a pellet ball containing his hook and bait into a very tight swim and fifteen minutes later was admiring a new personal best weighing 8lb 7oz. That evening eight more fished graced the angler’s nets, not bad on a stretch of river that up until that evening had been fishing poorly!
The advantages of using the Ballmaker over the method-lead are, no longer does an angler have to prepare pellets in advance as the Ballmaker pellets have a sticky binding agent that allows them to be prepared in minutes, on the bank using water from the river. Another is the compressed ball doesn’t break up on impact with the surface as the device creates a film like covering on the outside leaving perfectly formed 2mm pellets inside to break-up and release. Also by burying the hook and bait an angler can now drop the rig directly into streamer weed or cast close to bankside cover with the confidence that the hook hasn’t been masked or snagged.

I wanted to try the method myself and headed to the river Kennet at Aldermaston Mill, one of the very few, if only day ticket stretches on this river where an angler can target barbel. Time wasn’t on my side as I only had a couple of hours, however Peter Arlott the resident river keeper pointed me in the right direction and I managed a couple of modest barbel almost immediately after lowering in. What I did notice was just before the rod slammed round the rod rattled a few times and I can only assume this was from a barbel as it mouthed the pellet ball, only for it to explode into a cloud of tiny pellets only then for the barbel to suck in everything including my hookbait! On the way home I couldn’t resist trying a barbel hotspot on the Loddon and was gob-smacked as once again after just a few seconds the rod rattled and slowly pulled round. On setting the hook the river erupted with a fish slashing on the surface before going deep. The fight was strange and I expected a big chub to surface but it wasn’t to be as this personal best rainbow trout weighing 6lb 10oz soon revealed itself!

Using the Ballmaker
The Ballmaker pellets need to be prepared and can be done easily on the bank. Just add a little river water to wet them down. Allow the moisture to be absorbed which takes a few minutes and then add a little more water when the pellets have dried out. Do this three or four times and the pellets should be moist and spongy.
12a – Half fill the Ballmaker with moist pellets.

12b – Add your hook and bait so that the braid is within the slot.
12c – Fill to the top and don’t overfill as this will create problems.
12d – Add the other half and press firmly down before pressing the button on the largest part.
12e – The ball will be created and attached to the smaller end, just press the button to release.
12f – All ready to go!