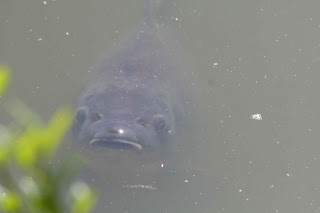 DAY – TICKET TACTICS
Specimen angler, Duncan Charman, visits a different day-ticket venue each month and explains how he gets the best out of his session. This month he passes on some great tips in how to catch carp off the surface. 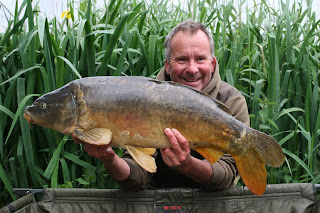 One of the most rewarding and exciting ways of catching carp is off the surface and with the longer, warmer days of spring allowing the water temperature to rise, carp can often be found sunning themselves in shallow quiet corners. The natural food larder is still far from thriving, all fish are hungry so after a long hard winter it’s a brilliant time to tempt these fish as their desire to eat overrides the need to approach a bait with caution.
This doesn’t mean they will be easy and one false move will see them spooking out of the swim with memories of past captures, however gain their confidence by patient feeding and it’s often the case of the flood gates opening.

Shallow lakes are often the best floater waters and Broadlands Lake in Hampshire is an exceptional venue to tempt carp off the top, and it’s not always the smaller fish that fall to this method, it’s the big girls too. Probably the biggest mistake anglers make is being inpatient and casting in to soon. The key in catching is to get one fish feeding as this will result in more following suit. Once you have a group happily slurping down everything you throw at them its time to make that long awaited cast, yet another mistake is to cast right in the middle of the feeding shoal. A hooked fish in this area will upset the rest and after capture you will be right back to square one again. What’s required is for a carp feeding on the outskirts of the group to be targeted and by using a float that’s heavy enough to cast well past them is needed. After casting out it’s simply a case of easing the float slowly back into position ready for the bite. When it comes the hooked fish can be steered away from the others and a big edge is to keep some feed going in whilst playing the fish. If you can master this then it will certainly catch you more fish. If this isn’t possible then as soon as the carp is landed fire more feed in before weighing and photographing the fish, it really is once again a case of feeding ‘little and often’.

As for bait, well you are spoilt for choice as some tackle firms have really gone to town and grabbed surface and zig fishing with both hands. The days of big lumps of crust being cast out have almost disappeared and Pedigree Chum mixers have been copied to death, yet few have succeed in bettering them. Bright coloured pop-up boilies are an alternative but it’s probably floating pellets which come in all shapes, sizes and flavours that has taken floater fishing to a new level, you can even buy oils to coat them in which creates a slick! It’s even possible to buy every bait mentioned in imitation form which allows the angler to repeatedly cast without the fear of the bait flying off at that vital moment. Although these modern day products can be devastating I personally feel that the convenience of buying them sometimes is the downfall of many an angler and I have to admit that I wouldn’t leave home without a fresh white bloomer from the bakery in my bag! Its just one of those baits, similar to sweetcorn, that rarely if ever lets me down and when all else fails then it’s the one that will turn a blank into a productive day. Some anglers have gone one step further and found an even bigger edge simply by colouring the bread green and the reason it catches more is because it’s less visible to the wild fowl, namely seagulls. Another edge is to mix modern and traditional baits together and one that has served me well is to thread an artificial bread hookbait through a big bit of crust, hook it and cast out. The carp often slurp away at the bread greedily feasting on the bits that break off, drop their guard and eventually the artificial hookbait will break off and well, that’s when the clutch screams and the rod bends.

Whether your are a modern or traditional surface bait angler, one thing that we all benefit from is the advance in tackle available to us and probably the biggest advance has to be mainlines and hooklinks. Once again it’s a minefield for most anglers yet Nash ZigFlo is simply brilliant as it not only floats but its light refractive index creates a line that’s virtually impossible for a carp to see and with minimal stretch means its more fish hooked. Float have also advanced from the water filled bubble type to high-viz controllers and more recently self-hooking Bolt Machines which have revolutionised floater fishing at distance. Getting fish to feed, if they are well out in the lake, is also now easy as baiting tools have advanced big time from the trusted, or not so trusted catapult, to spods, then spombs and now even baitboats! I must admit I still love getting carp feeding close in, using a catty to feed and a piece of crust as bait and to strike the moment those lips engulf my hookbait, yet it the fish are at distance then I will readily tackle up with all the mod-cons, well maybe not a baitboat, and catch them like this. It’s really a case of having every option up your sleeve even if it means becoming a modern purest!

If like me, catching carp doesn’t float your boat, then there are other species that can be caught off the surface, namely grass carp and rudd. Grass carp are a great target and many club lakes such as Farnham Angling Societies Bagshot Lea Pond offer the angler this diversity. Unlike king carp that are quite aggressive feeder’s once preoccupied, grass carp can be very tricky, circling and mouthing baits with caution. The other problem is they don’t slurp around the surface with their lips on show and mouths open, preferring to simply cruise up to a bait, often out of sight, before just popping their snout out and sucking in the bait. Timing a strike can often be a bit ‘hit and miss’ however the Bolt Machine on a short 2ft hook length often catches them out, especially when feeding at distance. Another way of increasing the amount of takes is to use a yellow hookbait, such as a small pop-up.

Rudd on the other hand will be quite confident in taking a bait; the only problem is that they tend to drift in and out of a swim which becomes frustrating as often long periods of feeding are only rewarded with short spells of catching. Floating maggots are brilliant fished in conjunction with the smallest controller float however I’ve caught a few once again using the Bolt Machines and one thing is for sure, rudd seem to know what is real and what is fake!

So there you have it, some new tips that will work in your favour this spring when you fancy something different on one of those sticky, sunny afternoons.

Images –
1 – Look carefully, your being watched!
2 - Surface fishing isn't all about small carp.
3 – Spring, a fantastic time to be fishing.

4 – This Broadlands Twenty came off the top.
4a – Bread, I wouldn’t be without it and mixed with modern hookbaits can outwit the wariest of carp.
5 – This image of Stuart playing a twenty pound Broadlands carp is what surface fishing is all about.
6 – Nash Bolt Machines have taken surface fishing to the carp.
7 – Soak the Bolt Machine’s foam in oil and it will create a perfect slick drawing carp in from a far.
8 – Surface baits come in all shapes, sizes and colours.

11 – Grass carp create a challenge on surface baits.
12 – Keep a first aid kit with you at all times, especially when grass carp are around.
13 – Feeding at distance can be done in a number of ways.
14 – Floating, light reflecting lines and yellow hookbaits will sort out the grass carp.

15 – I have to admit that this brace of rudd weighing an incredible 7lb 6oz came on popped-up baits, yet get the right conditions and targeting them with surface baits is a realistic proposition.