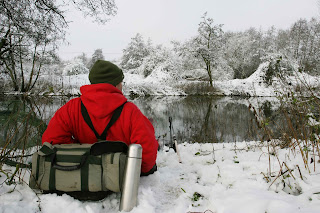 Bread, so simple, yet so effective!

When conditions get harsh many anglers hang their rods up and await the lengthening days when the warming sun brings promise of fish crawling up their rods, yet winter, and I mean the short chill biting frosty days doesn’t mean that the fish wont be biting, believe me they are, you just have to pick you species carefully and adjust your tactics to suit.

In all honesty the only species that I have failed to get my head around and catch consistently throughout our coldest months are crucian carp, I just think these feed up in earnest prior to the onset of winter then rely on these reserves right through to the spring when once again they go on a feeding frenzy prior to spawning. Tench and rudd feed in winter, that’s been proven, yet most anglers don’t have the time to locate these or the inclination to fish through the night when they are most active. Carp, bream and roach are also worth targeting throughout the colder months but generally this will mean arriving very early, before dawn and watching the water to locate their whereabouts. Find them though and cast an effective hooking system carrying a good quality bait too them and you will catch. Sessions don’t have to last all day as after three or four hours the action will tail off allowing you to return home in most cases by lunchtime, however many wont have the luxury of being able to make an early start, grabbing a few hours during the middle of the day and often on a weekend so what’s the answer for them? Chub.

Many day ticket venues now stock chub, even ide as these provide the angler with consistent sport on the coldest of days. Two fisheries near me, Bowsaw and Sumners both have lakes that contain a good head of chub and all an angler needs to do is to fish the waggler and spray maggots in order to get bites, just like I did when I visited Newdigate Fishery earlier in this series. Feeding is the key to catching stillwater chub in winter, keep it going in on a little and often basis and the chub will eventually turn up and switch on.
For me though frosty, even snow covered fields mean big chub on flowing water and the colder the better. I have had some of my best catches when cat ice lines the river margins and what’s better, the chance of seeing another angler is rare. Unfortunately just the thought of sitting in one swim all day getting frost bite puts many an angler off, yet it doesn’t have to be like this as that sort of attitude is a recipe for disaster. Think mobile, think active and not only will you keep warm but you will catch loads more fish and tactics don’t have to be complicated, in fact catching big chub couldn’t be simpler than a basic running feeder set-up and a big piece of bread.

I visited Trunley Heath stretch of the river Wey controlled by Godalming Angling Society recently armed with just enough tackle to fish effectively yet keep mobile and a loaf of bread costing not much more than a pound. It was the first time I had seen let alone fished this stretch yet spending no more than fifteen minutes in each swim I was able to cover most off the river catching half a dozen chub to just shy of four-pounds in just a few hours. This sort of fishing isn’t just rewarding, it keeps those withdrawal symptoms at bay and allows me to build a picture in my head of the river for future sessions as well as providing some well needed winter exercise. After a few sessions certain swims will stand out as banker swims whilst others will be given a wide birth and once mastered less time can be spent bankside yet rewards will be far greater. 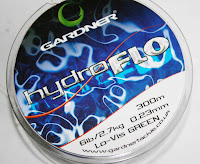 Getting the best from each session isn’t just about getting to know the river, tactics have to be thought through and that all important fear factor off ‘is the bread still on’ overcome! This is the most common problem for most as just one small pluck will have negative thoughts running through the brain, yet confidence in using bread comes with time and my advice is, it takes a lot to pull and big piece of flake of a big hook so have faith, leave it in the swim for fifteen minutes then on the retrieve gently lift the rod. The bend in the rod will tell you if the bread is still on and you will feel it come off on the retrieve as well as seeing it come to the surface someway down the swim as flake floats! If there is no resistance, the bait has gone and if you have had a few knocks then make another cast. If you struggle to place bread flake on a hook then its worth buying some Nash Bread Bomb’s, simply place some flake between this innovative idea and you can rest assure that its not coming off.

Usually if chub are present then you will have indications on the rod tip almost instantly. Often this is a sharp tap followed by a steady pull, especially from un-pressured chub. Oh how I wish it was always like this yet when chub are suspicious bites can be the slightest of knocks. I usually fish a swim for a steady pull first returning later with the intent of striking on the slightest of movements and it’s a tactic that has worked on many occasions. What I try and tell anglers when chub fishing is to strike on any secondary tip movement, a slight pull followed simultaneously by a firmer pull or strike after the one second rule, the tip being pulled round for more than one second. One thing that chub are very good at is feeling for resistance so try pointing the rod tip to where you have cast and instead of a ninety degree angle from tip to bait try reducing this to say ten degrees and hold the rod at all times if possible.

Tackle wise things don’t get any simpler and I prefer to use a 11ft float rod as its light and can be held all the time, is thin enough to register bites and just far more enjoyable when playing a big chub than a longer, heavier quiver-tip rod. Mainline is the ever reliable Gardner HydroFlo in a breaking strain of 6lb which is fished right through to the hook. As for the rig all this comprises off is the smallest feeder needed to hold bottom, usually a 10g Drennan cage filled with liquidised bread buffeted by a float stop along with a size 8 barbless Nash Fang Gaper hook. The great thing with the float stop is the length of the hooklink can be altered if required and the lack of knots in the rig means that it’s super strong, one that should allow a barbel to be landed if hooked.

So here are the main areas to concentrate on this winter when you head out into the cold wanting to get some chub action.

Get the basics to this enjoyable and productive method right and you can take it to any river that contains chub, on the coldest of days and as long as you place the rig in the general area chub are lying up in you will catch fish!

Images
1. It’s never too cold for chub, in fact when it snows I’m rushing to the river.
2. My personal best, this odd shaped warrior came to the simple bread tactics explained.
3. Even cat ice in the margins won’t put the chub off.
4. Action on a snow covered landscape.
5. Bread, cheap, versatile and absolutely devastating on a cold day.
6. Feeders – The feeders I use in cold clear conditions are tiny, check these out against the size eight hook!
7. Big wide gape sharp hooks are a must when fishing flake.
8. Mainline – Its amazing how difficult it is to break 6lb mono, even on a straight pull and having just one knot will see almost everything hooked landed, even a rogue barbel.
9. Bread on the hook – To mount bread on the hook I tear a piece around the size of a matchbox from a slice, fold this in half, place the hook so the eye is in the centre of the fold, fold again and simply press two fingers against the eye until the eye is felt. Don’t press the bread around the point of the hook as this should be showing.
10. Bread Bomb – I’ve fished with anglers that struggle to mount bread on a hook due to having big clumsy fingers so if this is the case buy some Nash Bread Bombs as this will solve your problem. 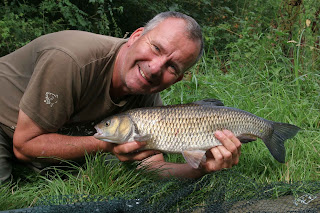 11. Flavour – Bread is brilliant on its own but catching is all about having confidence and if you feel you need to add a flavour then go ahead, just don’t over do it. If I know barbel are around then I have created an edge and caught a few simply by adding some flavour to the palms of my hands and rubbing in as this will taint the bait just enough throughout the day
12. Rig – It’s as simple as it gets.
13. Don’t ignore bread at any time off year as it’s the best chub bait you will ever use.