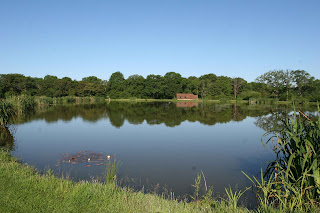 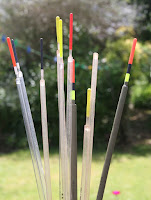 If there is one tactic I love fishing it’s the waggler, no not the more commonly used ‘pellet waggler’ seen on heavily stocked carp waters but the old fashioned waggler be it a peacock insert or my favourite the loaded crystal waggler. When was the last time I saw someone using this method, in truth I can’t remember which is so sad because to me it’s the most rewarding and enjoyable way to float fish and when I find a venue that lends itself to this method and get into a rhythm of feeding then casting I’m completely in my element.

Frensham Great Pond with its vast shoals of tench and shallow nature lends itself to fishing the waggler, yet it’s the depth searching nature of the hookbait that really comes into its own on this venue for its sight feeders rudd. Maybe it’s the decline of this species or more likely the trend for our younger generation to follow carp and cast out bolt rigs that has seen this devastating fall out of favour. Hopefully my first article where I showed how productive marginal fishing with prawns under a delicate pole float, for not just carp but most species, can be has given a few readers a new tactic. However if your interested in other species like me then its worth having faith in the waggler as its not just rudd that love racing in and grabbing a free falling maggot or two.

Newdigate Fisheries in West Sussex has been on my list of venues to visit for quite a while, even before seeing fellow Nash man Colin Davidson with a seven pound plus golden orfe and it’s this species that I have decided to target on the waggler. The three farm fisheries that offer numerous lakes that are fishable on a day ticket and nearly all offer the chance of catching a specimen orfe, one in access of five pounds and it was the newest lake on Greens Farm, Lodge Lake that Colin directed me to.

Having to book in advance means you are at the lap of the gods regarding weather and arriving at opening time, 7am, in brilliant sunshine and a cloudless blue sky meant that although it was a great day for fishing, it wasn’t going to be a great day for catching. Some big carp were cruising and tench bubbling but the flash of gold eluded us after a quick circuit of the lake. A quick assessment of the conditions saw me setting up on the north facing bank as the south west wind would allow maggots to be catapulted close to the lily protecting cages on the plateau in the centre of the lake.

Waggler fishing is all about keeping things simple and my tackle consisted of a 13ft Carbonactive rod and small Shimano reel loaded with ultra thin 6lb Technium mainline which sinks well, rarely coils and casts a dream something very important when float fishing at distance. A Drennan 1BB 2g loaded insert crystal waggler, the ultimate casting float in my mind or so I thought was simply attached using two no4 shot which almost cocked the float followed by a hooklink attached loop to loop made from 0.11mm Reflo (3lb 6oz) line. Although Id prefer to use a micro-barbed hook when maggot fishing, keeping in with fishery rules I finished the set-up with a size 18 PR36 hook. With the float almost cocked I had to find the depth so instead of a more conventional plummet simply pressed an AAA shot onto the hook cast out a few times until the tip just showed. Don’t rush plummeting, it’s the most important part of float fishing and an educated guess is just not good enough. After casting out allow time for the float to surface and once dead depth is found add an inch, plus a tiny number nine dropper shot a few inches from the hook. I even place the hook in the rods keeper ring and mark the rod blank with type where the float tip reaches as this allows me to alter the depth throughout the session if needed but always find dead depth again without going through the plummeting process all over again.

With the float set and depth found its was now time to trickle in a few maggots, maybe a dozen every thirty seconds, a process that needs to be kept up all day! I like to spray maggots then cast as this allows my bait to fall with the free offerings yet after half an hour and no bites fourth coming I decided to relax the casting but not the baiting until a bite came. It didn’t take long but from the power of the fish it wasn’t a golden orfe but an immaculate tench around 4lb. After the first bite I then got into the routine of feeding and then casting only to miss a bite on the drop. Next cast I was ready and as the float disappeared the rod took on a healthy curve and when a big orfe surface I took a deep breath and prayed which seemed to work as soon I was looking at a personal best weighing 4lb 4oz.
Four more tench followed, the best 5lb 6oz before the action slowed at around 11am. Keeping up the feeding saw the odd bites come but with the wind increasing making casting and striking difficult I found myself having to change to a larger float. Will Raison had mentioned that the match anglers were using loaded Drennan Glow Tip Peacock wagglers so setting up with a 3g no3 version saw the side wind easily handled and with a better presentation a further two more bites hit.
The other five anglers tried a number of methods from using delicate pole floats in the margins, helicopter rigs and the method and in total they landed exactly the same tally as me, seven tench and one orfe which proves just how effective this method is but only if you’re prepared to work at it.

Top tip images
TT1 – On sunny days make sure that you take along a peaked cap and polarising glasses.

TT2 – When visiting a day ticket venue for the first time I make sure that I have every option covered and keep a couple of tackle boxes loaded to the brim in the car.
TT3 – Floats aren’t cheap these days and are easily broken so I protect mine in a piece of tubing which once held a pole section.
Posted by Unknown at 06:36