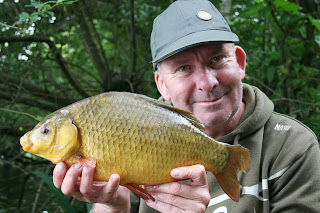 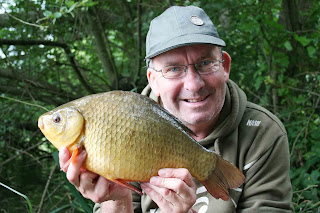 Just returned from a short session at Godalming Angling Societies Johnsons Lake. Strange how sometimes things can work against you but come the end of the day seem as if it was meant to be as arriving slightly later than wished I found a match to be on Harris Lake where I originally wanted to shoot a short video. Heading to Johnsons (Enton) I amazingly found a couple of my favourite swims free so resisted the urges to head where the wind was pushing (he railway bank) and drop into one of them. A closer look at the calm surface showed no fish rolling but what it did reveal was lots of bubbling which I assumed was from tench. Having rods already made up it was a simple case of baiting up and casting to them before making a reference mark on the line for future casts.
I didn’t feel that confident as Johnsons can be a very moody place, especially in August, yet my worries were calmed as five minutes later the left hand rod ripped off and a lovely double figured carp graced my net. Not bad on a size sixteen hook and a five pound hooklink! Three more small carp followed before the crucians appeared, seven in fact with the biggest weighing a shade over two and a half pounds. So much for the tench expected, however then these turned up, albeit small ones to slightly over 5lb along with a couple of rudd.
The weather was meant to take a turn for the worst come midday, yet this stayed off till around 3.30pm, something else that seemed to be working with me for once, especially when early into the session the wind direction swung with it pushing straight into my face. The earlier disappointment of finding Harris unfishable was soon forgotten due to the superb fishing when at times two fish were being played at once, yet it was the last two fish that really made the session special, crucians weighing 3lb 2.8oz and 3lb 5oz.
My good friend Tom is in the process of creating the video which will give a few of my secrets away, not all, and will soon be available to watch on my Face Book page and other social media sites so keep an eye out for this.

If you fancy a guided day learning a few new tricks to improve your catch rate then why not book me for a days guiding. Tel 07928 617006 or better still email me with your requirements and I will do the rest. Email duncancharman@me.com