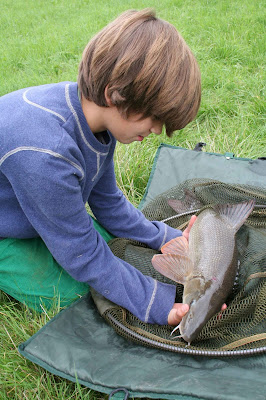 Jake’s first Barbel.
I must admit that it’s rare for me to leave a venue after a days, or in this case mornings fishing and drive home with a smile from ear to ear but that’s exactly what I found myself doing today.
Did I catch a monster, a personal best you may well ask but no, well not me anyway as today I was once again looking after William and young Jake, our target to catch Jake his first ever barbel. Conditions couldn’t have been better as overnight rain had placed some extra water and colour into the river. Amazingly no other anglers were on the river which surprises me as Stanford End is a popular piece of river, it just seems that most fish evenings and don’t act on favourable weather conditions! Anyway with the banks deserted we had the best swims to explore and with just four hours to achieve our goal we headed downstream to the same swim that Jake caught his personal best chub on our first outing. I had left William upstream in a swim and had told him to lower his bait under a tree and wait. This he did and was duly rewarded with a nice four pound chub. 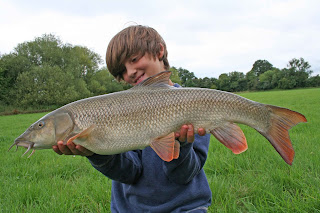 Unaware of this we settled in what’s been the most productive swim this season, however it’s a toss-up on what grabs the bait first. Will it be a chub, barbel or an unwanted crayfish that’s indicates no fish are around! First cast and just a couple of minutes later the rod taps as a chub tests the bait. Resisting further taps Jake suddenly reaches for the rod as it bends round further but unfortunately the crafty chub must have seem this and lets go a split second before Jake strikes. Ouch, as I know this could well have spoilt our chances of a barbel and half an hour later it’s confirmed as the rod tip fails to move.

Heading upstream we try two more swims without any signs of fish before another productive winter swim starts to show signs of fish. We both watch as the line tightens and the tip pulls round a couple of inches before staying there and after thirty seconds or so assume it’s a crayfish but just as we say this the tip whacks round and the smallest barbell in the river is momentarily hooked before the hook pulls. I can feel Jakes disappointment and try to ease the pain saying it was only a baby but with less than an hour to go know that the chances of catching are unlikely. This is the moment though that I believe there is a ‘fishing god’ as we decide to make a risky move back into the first swim and a few minutes after casting in Jakes finds himself attached to a barbel. The excitement Jake experienced whilst playing the fish was unreal and the joy of holding his first barbel was just a pure joy to witness.

Well done that man and now you know why I was grinning like a Cheshire cat all the way home.
If you’re going through a bit of a lean spell targeting barbel or like William and Jake would like a fast-track experience into how to tackle this infectious species then why not book me for a day’s guiding.
Tel – 07928 617006
Email – duncancharman@me.com

For more stories and feature take a look at my website – www.duncancharman.co.uk


I have just received these words from William, thank you...

Professional and exciting Barbel fishing with Duncan Charman.
In June 2015 my grandson Jake (aged 11) and I had a fantastic day’s fishing with Duncan on the river Loddon. I caught my first ever barbel and Jake caught an excellent chub weighing over five pounds.
Duncan is an experienced and helpful guide and clearly has accumulated a great knowledge of the river and the habits of the barbel, chub and other species that reside there. He was happy to share all his skills and tackle with us on our trip which made the whole thing very worthwhile. Later on in that first visit the summer heat was becoming uncomfortable and Duncan decided to call it a day in the afternoon as the fish were unlikely to be feeding. However, he offered us an extra half- day’s fishing at no extra charge which was much appreciated.
Following our initial success Duncan generously provided some superb photographs of our catch on disc and also mounted and signed by an Angling Celebrity. Duncan also arranged for some of the photographs to feature in the Anglers Mail and in the Tight Lines Sky TV programme. 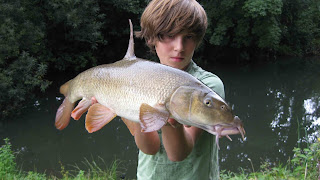 Naturally, Jake and I were keen to take up his offer of the extra half-day and we were soon back on the same river eager to locate some of its legendary barbel. It was on this second visit that Jake caught his first barbel – a fine six and a half pound fish in perfect condition which put up a momentous struggle with all the surging strength that only barbel are capable of. Jake and I stayed on when Duncan took his leave at mid-day and Jake went on to land another good barbel in the afternoon.
We are both now dedicated barbel anglers – largely thanks to Duncan’s inspiration and example.
William T. Heath and Jake Ouracov-Heath