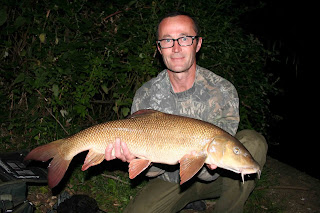 Farnham Angling Societies third Barbel Teach-in – Thursday August 6th
The river was once again carrying a little colour so expectations were high of a few fish gracing the angler’s nets. After the standard talk about tactics and bait we took a walk of the river before each angler choose a swim for the evening.
John, who had just recently got back into angling and the only angler in the top field was instantly into a fish which turned out to be a personal best chub of 3lb 11oz. The anglers in the bottom field, some who decided to move around and others to stay in one spot were experiencing quite a few steady pulls on the rod tops which unfortunately weren’t from fish but those dreaded crayfish. An hour of so passed before John called to say he had just landed his first ever barbel, a small one and one that could have possibly been stocked early this year at 3lb 8oz. A couple of the other anglers also mentioned that they too had caught small barbel, ones of around a pound so things are looking a bit brighter for the future of Stanford Ends barbel population. A small pike hooked fair and square in the lip was caught.

As dusk approached expectations rose and it was once again John who landed yet another chub, yet it was David who had also moved up into the top field who landed the best barbel of the evening, one weighing 9lb 1oz and another personal best. Amazingly when he told me where he had cast I informed him that he was only in around 2ft of water which just goes to show, sometimes making a mistake can produce the goods. 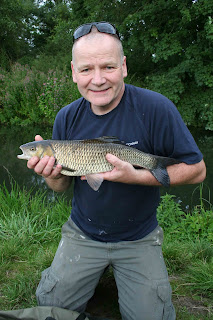 Although the fishing hasn’t been brilliant so far this year on the river, it’s not an isolated case as everyone; up and down the country has been struggling. June, July and August are usually difficult months as the fish have loads of natural food available and in Stanford’s case there has been many an angler treading its banks all of which have been depositing bait in the water. The fish are obviously aware of what’s going on so have become harder to tempt than previous years but they are still there and in numbers, just look above the bridge in to the water of the Wellington Estate’s PRIVATE trout section and you will see around twenty barbel, some well into double figures. Please note that this is a NO FISHING area and anyone found doing so will be dealt with by the Executive Committee. Another problem seems to be litter, mainly around the bridge and few swims below. This litter consists mainly of empty meat tins, coke cans and starlight wrappers. It’s obviously the same angler and one who’s probably not a member so please inform the bailiff if you see this angler, by the way he smokes and seems to have a constant cold due to the tissues that are also left. I also had to ask two young poachers who were spinning in the top pool to leave so could everyone be vigilant and if they see a problem please call one of the bailiffs in the handbook.

It seems that booking with myself has worked this year as I had no ‘no shows’ unlike previous years. Thanks to all the anglers that attended, I hope you have learnt a few tricks and go on to land more personal bests and I apologise to so many anglers that called me and couldn’t get a place this year.
Duncan Charman