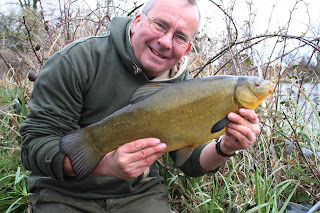 I think we are all glad to see the back of April which has been unseasonably cold; in fact I can’t recall a month for years when most mornings a heavy frost lay on the ground. As for the fishing, well we are a few weeks behind as I found out when I headed down to Kent for my first tench session which unsurprisingly, apart from a Tufftie, drew a blank. Even the shallow lakes like Harris Lake are only just waking up, a venue I visited a couple of times, not with rods but a camera to create a couple of features. On a good note the tench fishing will be prolonged later in the year which I’m hopefully going to try and capitalize on, but as you can read, getting the time to do a session worthwhile isn’t going to be easy. 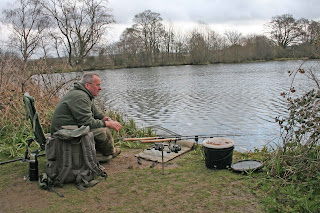 Looking at my diary inputs it’s been a strange month. The urge to get out and fish has been somewhat lacking, probably due to the overnight temperatures and as a result I have tried to pack in features for magazines that will hopefully create some space over the next couple of months. Other time consuming events such as manipulating images taken at weddings have taken much of my time and I guess at least six solid days have been lost. Amazingly I have only fished for myself three times this month, however you may recall that I was trying to knock the numerous short sessions on the head and when I did get bankside put in some serious hours and having spent 46hrs over just three sessions feel I have started to do what I wanted to achieve, shame the fish didn’t play ball! Three guiding sessions were all massively successful with Ron catching loads of fish at a local day ticket venue, Aaron smashing it up at Newdigate and Keith getting his birthday wish, an early season tench on his local water. Writing features and shooting images to accompany these have played a massive part this month and I have travelled to some varied venues and put up with some serious weather conditions. An overnight catfish session at the end of the month reinforced the fact that I’m getting to old to sleep under just an oval as the temperatures fell to -4 covering my sleeping bag with frost. I even had to double over my long socks to keep my feet warm as I had forgotten to take my thermal overwrap, a painful but serious lesson learnt; luckily the cats were feeding though! It’s also been a learning curve as the features that I am now producing are far from what I specialize in and are more carp and lure orientated than specimen non carp fishing. 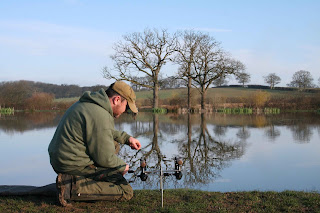 May has finally arrived and at long last it feels as if summer is just around the corner. The month has started just as it ended with features taking up
the first few days; however withdrawal symptoms are now beginning to affect my thinking, time to get the rods out!

01/04/16 – Waiting for the rush hour traffic to clear I found myself on the banks of Papercourt firing off a few images to help create a new article for Anglers Mail. Hopefully Tim will be happy with the result and I will find myself with a bit of extra work over the next few months.
02/04/16 – Heading off to Caterham Angling with fellow Nash man Chris Petter to do our first ever Shop Day. As always it was good to catch up with Alan Blair and speak to the customers that popped in during the day. 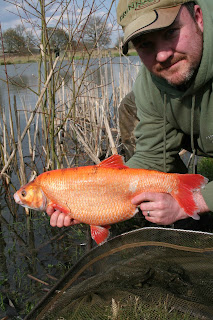 04/04/16 – Having spent so few hours bankside for myself I made the extra effort to get up early and cast a line at Enton for a few hours before popping into Apollo Angling to start getting some terminal tackle for the arrival of the tench campaign. As for the fishing it wasn’t easy, in fact most anglers over the weekend had struggled and the one’s that did catch seem to only be placing the net under tench, not crucians. I only had one run from a 6lb tench, yet for such a short session it proved that the lake was beginning to wake up.
05/04/16 – Readers may remember one of my customers having a red-letter day on the river Loddon when he landed two double figured barbel, loss another along with landing a 10lb bream and two specimen chub. Well Aaron was now looking to catch his first golden Orfe and come 7am we had the rods out and fishing. Sticking to our game plan Aaron caught fish all day and ended up with eleven orfe, six around the pound, two weighing 4lb 6oz, crinkle tail at 5lb plus an immaculate one of 6lb 13oz which I have never seen before and the big girl at 6lb 4oz as well as three tench. And some say my knackers are golden!


06/04/16 – The roach lake in the Test Valley was where I took one of my regular customers today and although maybe half a dozen roach over the pound showed it’s that time of year when the carp are beginning to become problematic, not that Ron was complaining as he loves catching anything and come early afternoon a dozen or more carp had also graced his net. 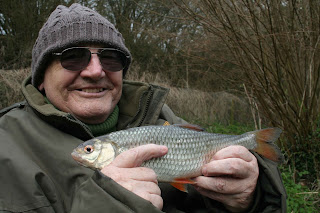 07/04/16 - The article writing has taken a bit of a back seat over the last few months, what with the house sale etc, yet I did finally get round too creating an Anglers Mail piece called The Specialists revealing many of my secrets in catching specimen crucians. Keep an eye out for this issue if you want to catch a few specimens this spring!
08/04/16 – The vans ill again, just another obstacle to keep me from getting to the bank, however fishing partner Chris Petter picked me up at 9am and we headed to Kent to take a look around the tench lake and get a feel for what was happening. Come 4pm we were back home and all fired up for our first session which should be in a week or so.
10/04/16 – It’s not often I sit in the office on a Sunday morning but the carp article for the Mail needed to be on Tim’s desk first thing Monday and with the catch images only just received from Jake the previous day it had to be done.
11/04/16 – Finally a day in the office getting on top of a few fishy things. Feel better for it just raring to get out and have a go at a spring tench now.
13/04/16 – One more go at Enton for a big crucian before it closes. The odd one coming out but generally slow on the crucian front. Arrived at 2.30pm and fished till 10.30pm for just five modest tench. Chris arrived around 6.30pm and had four tench, so fared better than myself.
14/04/16 – Spent the afternoon taking the images for a new Anglers Mail ‘On the Bank’ on long range margin fishing for carp.
15/04/16 – Another fishy afternoon, this time writing up the feature for AM. 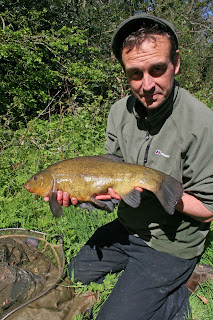 20/04/16 – The last few days have been taken up manipulating photographs from a wedding attended on the weekend so it was great to get back out on the bank, this time with a new customer at his local lake, one I had never fished before. The weather couldn’t have been worse, well for catching anyway, with a ground frost, bright blue cloudless skies, an easterly wind and temperatures rising to a pleasing 17 degrees. It was Keith’s birthday and he was keen to learn new tactics such as the Helicopter rig and the pellet cone and hopefully catch a few fish including his first tench from the venue. Fortunately we managed to catch the end of a morning feeding spell as the first four casts on the helicopter rig produced four quality bream to 8lb. Things then went really quiet so we decided to move to a swim that had lilies appearing to its right and first cast produced a screamer from a four-pound tench. Apart from trying to stalk a carp or two these were the only bites we received but taking into consideration the weather it was one of those days when we could well have been biteless, but the deadly heli-rig proved its worth and I know that Keith will definitely be bagging up just as soon as the water temperature rises.
21/04/16 – Today was going to be manic as the morning was spent with my good friend Paul Garner who needed some action shots for a feature or two. The fishing gods were looking down on us as while most around the lake struggled Paul caught steadily all morning which allowed me to get in the lake and take some different angled playing shots for him and be home come mid afternoon. 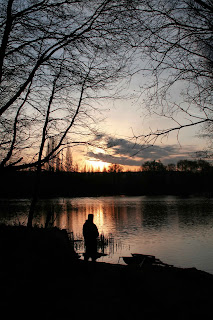 21/04/16 – 23/04/16 This was to be my first proper tench session of the year, yet there’s nothing much to report as both myself and Chris blanked. We knew it was going to be tough due to the cold weather but thought that between us we could have bought a bite or two. Chris fished small pop-ups over particle while I scaled right down to a size 16 hook and triple maggot fished on the Helicopter rig. The first night was really a ‘chuck it and see’ approach as arriving at around 7pm all we could do was locate a couple of swims, set up camp with little or no time to have a lead around for features, so not wanting to ruin the swims before we started just cast out with the intension of getting up at first light and working the swims from then on. A few carp were spotted at distance but reports were that few if any tench were being caught so we weren’t overly disappointed to draw a blank in such hard conditions. The lake’s we are targeting are big deep gravel pits so they are going to take time to warm up and with the weather continuing cold for at least another week we have decided to leave our next session to early May.


25/04/16 – A day in the office to catch up on fishy related paperwork.
28/04/16 – I was looking forward to catching up with my mate Mark Grafham for an Anglers Mail feature at Godalmings Harris Lake. Arriving at 6am things at first didn’t look good as a hard frost was followed by a cloudless blue sky and a gaining wind from the north east. Luckily Mark knows Harris very well and after a slow start found some fish then proceeded to catch a net full on a very strange but effective rig. Keep an eye out for this feature in AM as it’s very thought provoking and interesting. 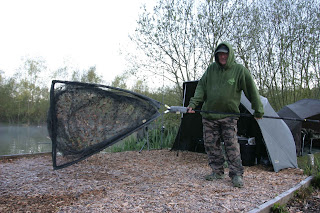 29/04/16 – The morning was spent writing up the AM feature before grabbing the overnight kit (not tackle) and heading to Furnace Lakes to create yet another AM feature. This time the target was catfish on a bait that takes some handling with Clive Banyon. It was certainly a good session and another great feature for Anglers Mail, yet the one thing I will remember from the session was the drop in temperature, -4 in fact and sleeping under just an oval and forgetting my thermal overwrap was a big mistake!

Images –
1 – No crucians, just tench.
2 – Typical set-up nowadays for specimen crucians.
3 – April warm still days and then cold frosty nights.
4 – Aaron ripped Newdigate to bits.
5 – Ron enjoyed a day out catching some quality roach.
6 – Keith with his birthday wish.
7 – Tenching in Kent.
8 – Clive and I played tennis in the early hours at Furnace. We didn’t need rackets!
Posted by Unknown at 03:07