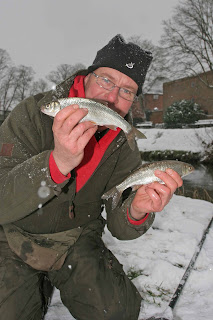 I have to admit at getting a few rather strange looks as I made my way along sheer ice paths through Farnham town centre at first light with my fishing tackle on Sunday morning. Was I mad or just mad keen, the former I think especially when I felt my legs go from under me? Luckily my rucksack broke my fall and after dusting the snow off continued my journey. Settling in the park I soon had a delicate stick float approach set up and after a few minutes spent priming the swim with maggots mad my first cast. Half way down the float buried, however the expected dace turned into a big chub and as I was just about to net it the hook pulled leaving the end tackle up a tree. Not a great start, and one sure to kill the swim, yet a few good dace did grace my net and the artic image I wanted was captured, although far from perfect as snow flakes were hitting the lens and all feeling in my fingers were long gone.
Having got my angling fix over the weekend, Monday and Tuesday were spent in the garage sorting through the kit. It was a well overdue job and in a way the weather was a blessing as it allowed me to wade through rods, reels and tackle boxes. Come Tuesday evening I had at long last managed to sort different set ups for a number of species including pike, perch, zander, chub, barbel and roach and for once in my life felt quite organised.
Wednesday I was thinking about checking out a venue for some oversized dace, yet with the snow melting and knowing that this and the salt of the roads would be in the river, knew that trying to locate these would be almost impossible, so once again spent the day getting a few overdue house duties out of the way.
Thursday I was booked in with the Tight Lines crew. Ide were on my hit list, however with the lakes frozen headed to the river Wey at Farnham as in such tough conditions needed a venue that would give me half a chance. Once again the river was cold and clear and the banker swim in the park produced the goods with a least a dozen good dace and two trout. Heading upstream I tried to put a good chub on the bank using bread flake, and for the second time in a week found myself flat on my back, yet an over enthusiastic pounder got to it first. A few good dace also came to the float, so it was a successful day. 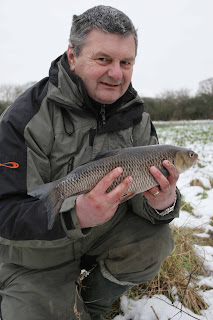 Friday the alarm sounded at 6am and with the conditions still cold finally managed to get a planned guiding session in. This time it was with a new customer who although had fished for barbel had never specifically targeted chub. Although the Loddon was suffering from snow melt and slightly high it was still relatively clear so we headed straight for the best swim and with fifteen minutes had a modest chub of around 3lb 8oz in the net. The next four swim proved fruitless, yet another swim upstream once again produced the goods with a similar sized chub. Looking back both swims were the same that l caught from a week or so earlier, seems the rivers becoming predictable, however its scary that many others that used to be so good are now fishless! One more swim was tried without any joy before we headed to the Blackwater. I had four swims earmarked and although the first failed to produce, the other three did. The best chub wasn’t quite four pounds, the other an old warrior and the third unfortunately came off. Trying the first swim again, the expected bite came but was missed. Chub fishing, predictable or what!
This weekend the weathers going to change. My barometer is falling quickly which usually indicates a short change. In a way I hope this is the case, as the mild air will defrost the lakes making them fishable and although the rivers will probably go into flood with the expected rain, once the cold air return then the fishing should be good. Let’s just hope when the cold returns it’s not as severe as in previous weeks.

Top tip and lessons learnt.
Bread fishing for chub when it’s really cold is brilliant, however it is relatively predictable. Nine times out of ten a bite will come within fifteen minutes of casting out so make sure everything around you is to hand. I even pour a cup of tea before casting out as it only takes one hand to drink this, but two to pour it, and you can bet on the bite coming when your pouring it. Hold the rod at all times, supporting it on a rest if needed and never take your eye of the tip. This lesson was learnt years ago. When it’s really cold small fish aren’t a problem so the smallest of tremors or taps is usually from a big fish. As soon a sign is seen be ready as the bite will come soon after.
Posted by Unknown at 12:53