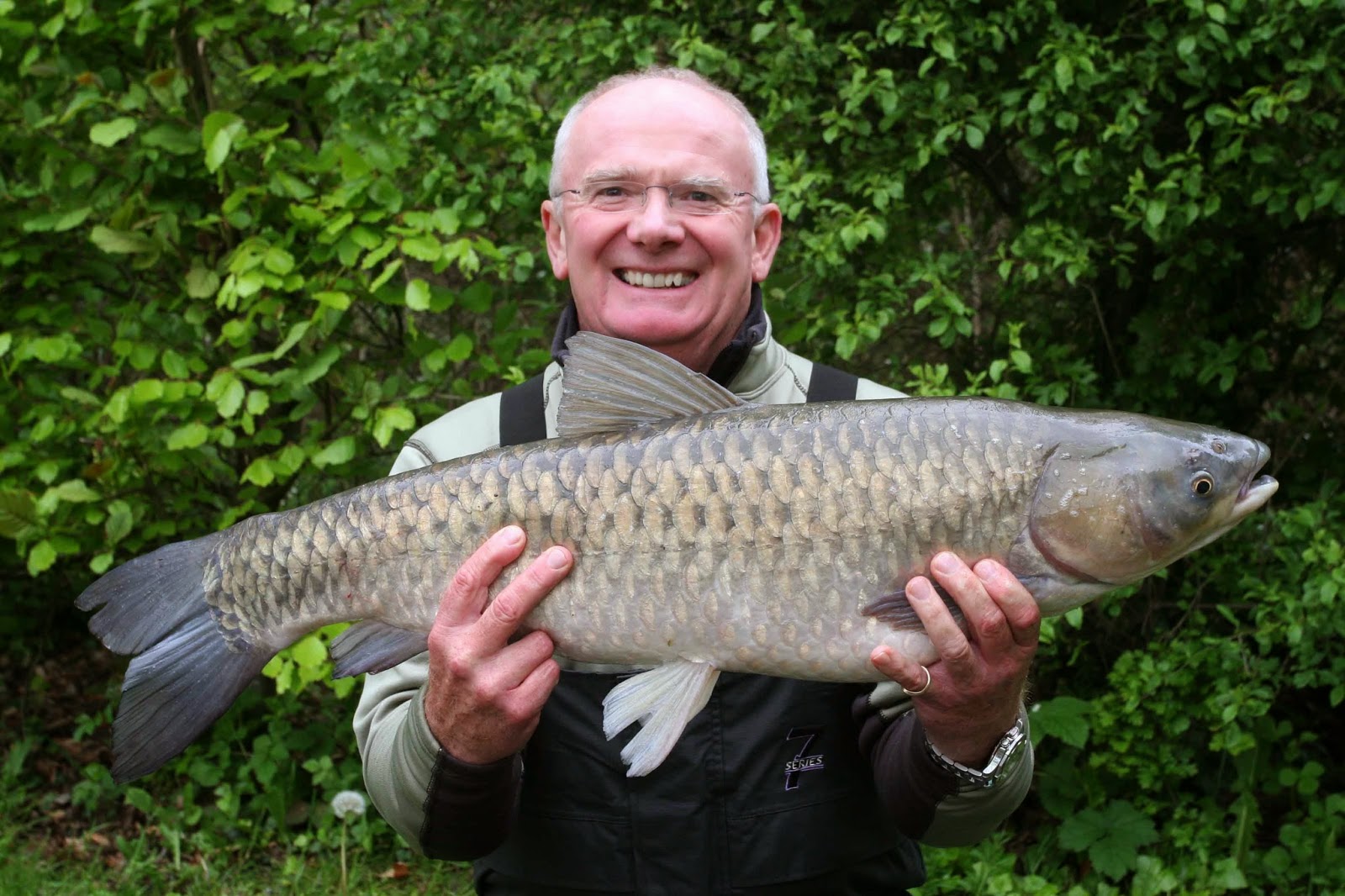 Martin eventually got his picture!

One of my regular customers was interested in joining myself and fishing companion Chris Petter for an experimental first trip targeting grass carp. These trips are to iron out ant creases and believe me this one needed a good ironing!
Arriving at Badshot Lea Big Pond at 7.30am the conditions weren’t exactly what we prayed for, overcast along with a chilly north east wind. Setting up along the railway bank our plan was to bait relatively heavily with particles and fish buoyant maize baits over the top. Chris had bought along his bait boat that hadn’t been launched for around six years so with three sets of old batteries fully charged we didn’t think that we would have any problems, yet after setting three rods the boat became motionless around forty yards out. After what seemed ages, hoping that this would drift in on the wind I decided to cast a lead over the top. Now with around six hundred pounds worth of boat and a two ounce lead being cast at it I could imagine what was going through Chris’s mind yet he needn’t have worried as first cast saw the lead land a few yards past and the line catching on its aerial. With new batteries fitted we managed to get Martins second rod out but the boat was still on a go-slow, yet as Chris tried to set his rods one of Matins sprung into life in true bream looking style. Knowing that grass carp often only give delicate bites Martin lifted the rod and sure enough what initially felt like a bream finally turned into a grass carp. With the carp safely in the net I arranged the camera and weighing equipment as these fish can be very active on the bank so being organised is very important, yet as I broke down the landing net the grass carp started to fight back and as myself and Martin watched, his first ever grass carp leisurely swam out of the net due to me leaving a great big opening in it. In a few moments Martin had seen angling at its best and worst and I embarrassingly reassured Martin that he would get another one. Chris finally got his rods out but due to the batteries looking a bit dodgy the two hour resetting of rods was increased to four.
Martin then received another bite but momentarily felt the fish before the hook pulled before Chris was away. Having a personal best of around 12lb we watched as a big grass carp, probably a mid twenty come slowly towards the net and as we crouched down it swam past, probably in scooping distance before going on a powerful run resulting in the hook pulling. Chris was gutted and for a few minutes not a lot was said, it was just one of those days!
Three hours past with little interest before one of my rods sprung into life, yet what was on the other end couldn’t be a grass carp as it seemed intent on stripping me of line. I was using my 9ft Nash Scopes and 10lb main, not exactly catfish tackle but that was what was on the other end yet gentle persuasion finally saw a sizable catfish drop into the net, one that weighed 15lb 12oz. The second battery had now died but the third, a smaller set seemed to be full of life and this rod was reset in record time only for it to rip of again a few minutes later. Once again the initial run told me it was our target and moments later a double figured mirror dropped into the net. We were beginning to wonder if a grass carp would ever show but again my rod signalled a bite and finally a mid double grass carp saw the bottom of the net and the safety of the unhooking mat!
Happy with three fish I allowed Martin to pick up the next run which again came on one of my rods and after a short fight he too landed a grass carp, one that was very similar to the one lost earlier so eventually managed to get his picture. Chris was still thinking of the one that got away yet seemed to be having the last laugh as towards the end of the session he was once again in and drawing a bream like fish towards him, yet just as he was thinking it would turn into a big grass carp a bream popped up on the surface. Another time my friend!
Fancy a day targeting grass carp then email me duncancharman@me.com
Posted by Unknown at 02:35