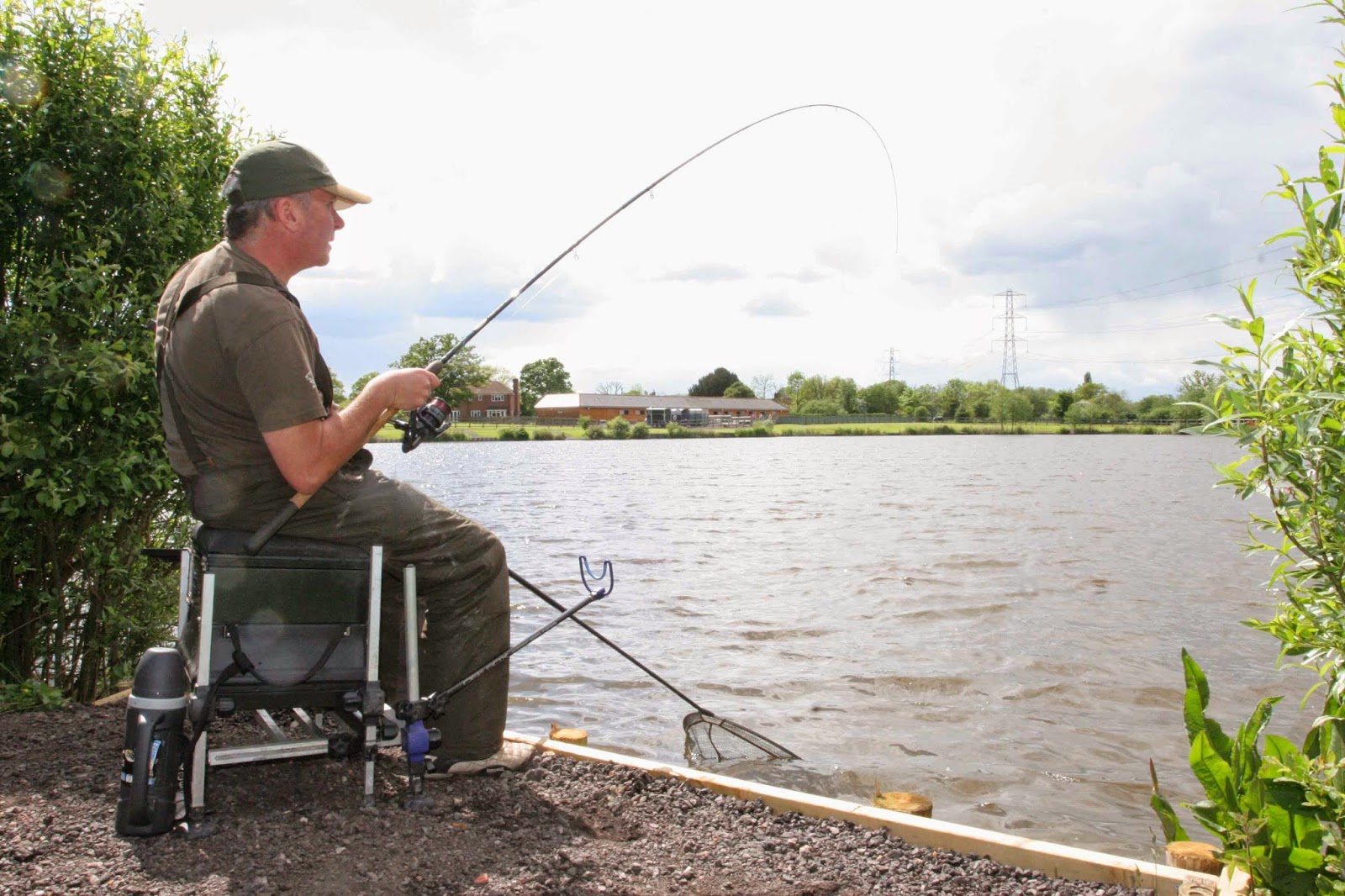 Conditions – Atmospherics constant on 1010mb, decreasing wind from the south west but still powerful, sunny with odd shower late on and temp rising to the mid teens.

I’ve fished Watmore Farm on a couple of occasions in the past. One was with a client that wanted an introduction into carp fishing and although every tactic we tried from the method feeder to PVA bags caught, the method that stood out and caught the most fish were zig rigs. The second time was with a group of friends celebrating a birthday and once again the zigs stood out yet if anyone had fished the pellet waggler and got the carp going then they would have simply taken the place apart.
Back then the fishery made you buy and use their own pellets, something that I detest, however the new owners Carol and Andy don’t insist on this which is encouraging as anglers pockets are only so deep!

The reason for my return was due to shooting an Action Replay feature for Anglers Mail which every angler needs to read as it’s simply inspirational. I can’t tell you anymore but keep buying your copy every Tuesday as it will be featured very soon.

Fortunately the weather stayed dry, well almost and come early afternoon, and with the feature all sorted I decided to stay on and give the pellet waggler a go. I must have looked a bit strange, perched on top of my match style tackle box dressed in Nash clothing, yet it had to be done as if you are going to give this method a go then you need to be organised and have everything to hand as feeding is the key to catching. The tray to my side contained my bait that consisted of a bag of Nash Instant Action Tangerine Dream 6mm High Attract Pellets along with a couple of sticks of Peperami, one spicy, one original. The Peperami would be punched into 6mm pellets and hair rigged whilst the pellets fed around the float to get the carp going. The reason for using the Peperami on the hair is that it withstands, not only the constant casting needed to get the best from the swim but also stays on the hook even when playing a fish and is so less fiddly that using bait bands and the like. 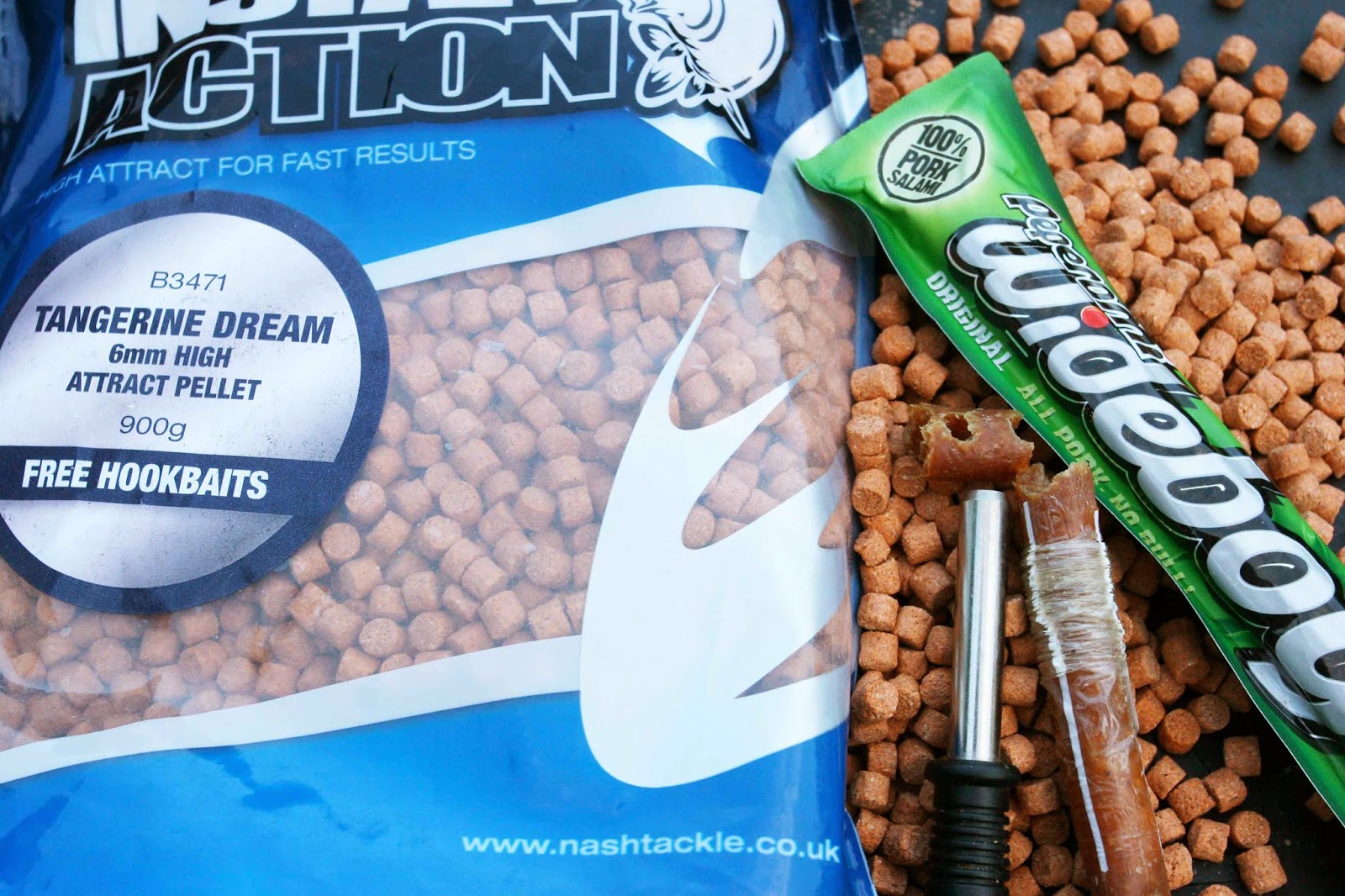 My 13ft Carbonactive rod I have to admit to being a bit under gunned for this type of fishing but as I only indulge in this method, maybe twice a year buying a purpose built rod seems a bit extreme. Gardner 6lb HydrFlo main line is great for this robust style of fishing and with a 8gram Dura-Pellet Wag, Reflo 5.14lb hooklink and a size 18 barbless PR36 tied knotless knot style completed the set up. Now you maybe thinking that a size 18 is far too small but this pattern of hook is seriously oversized so is more like a conventional 16 going 14! The Preston Dura-Float I have to admit to having mixed feelings on as although they cast like a dream and have brilliant colour changeable tops the brass weight tends to unwind during a fight so you need to make sure this is tight every cast otherwise you will loose the float as I did on the third carp. Fortunately I had the wind in my face and the float drifted in but I would personally recommend you take of one of the weight adjusting washers and then glue these items together.

All the time I was setting up, probably around twenty minutes in total I was catapulting around ten pellets out as often as I could in the hope of gaining the carp’s confidence and getting action from the off. In fact I had set myself a double barrelled target which was either how many fish I could catch from one bag of pellets or how long would it take to catch a dozen carp. Setting the rod rest so it was slightly off from centre I catapulted some pellets out, cast, then quickly sunk the line but before I could pick the pult up again the rod bent round and the clutch began to tick as the first carp slipped up. So what target was reached first, well it was twelve carp, time 1hr 40mins which included a ten minute break to avoid a torrential downpour. How many pellets did I use, not even half a bag, that’s 450g!
How do I describe this fishery, fun, immaculate and friendly. I even found a pound coin in the car park and a complete Dura-Float in the margins, however beware, these carp are their own worst enemies and fight like hell, something that puts me off a bit, if you know what I mean.