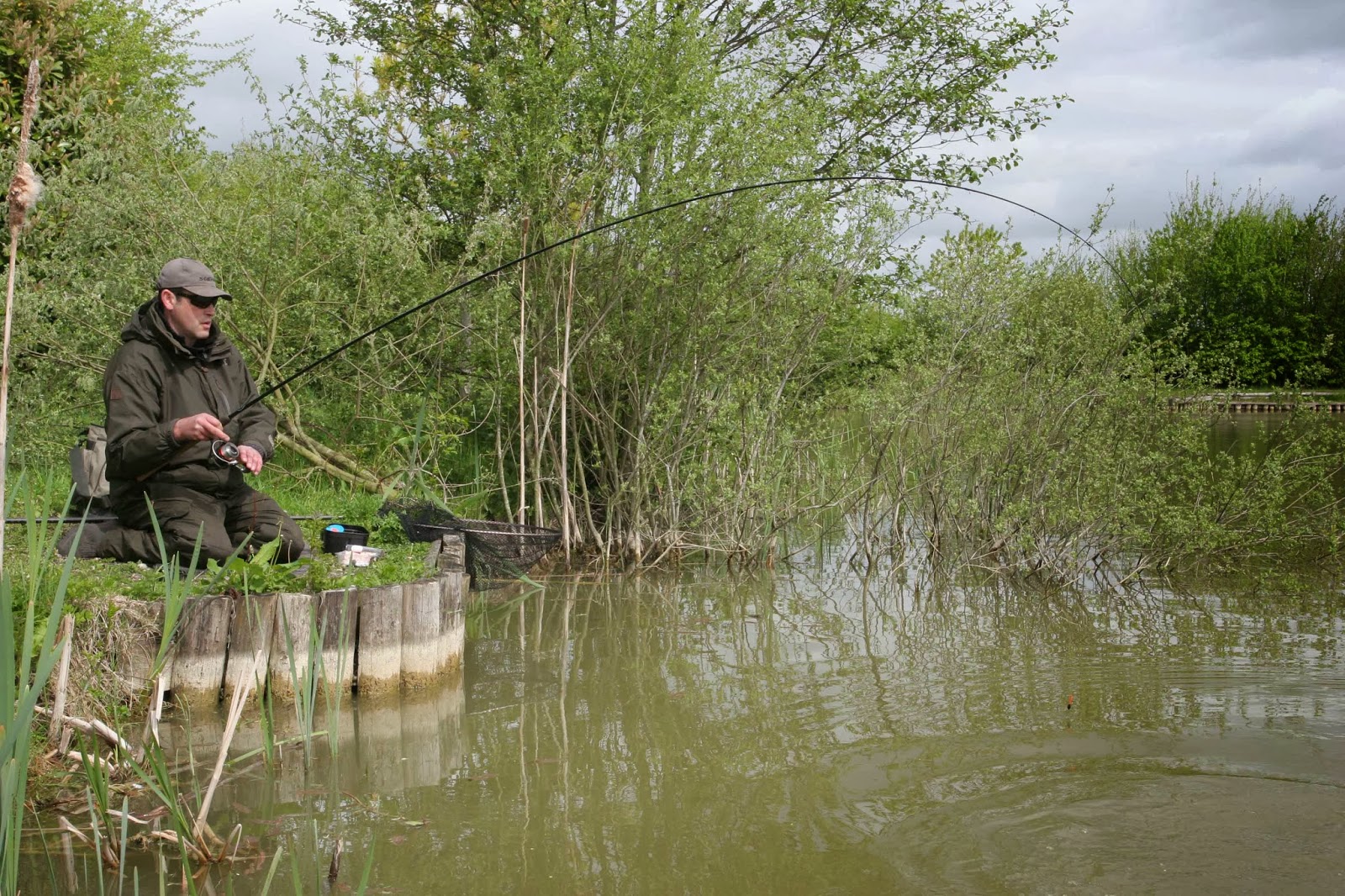 Anglers Mail Action Replay >>> Spring 2013
This week: Prawns catch loads of big perch but how many anglers use them for other species. We’ve teamed up with one angler who regularly bags up on big carp simply float fishing these in the margins.

Heading – Alan Muller goes marginal carp fishing with prawns.
Every now and again an anglers stumbles on a venue by accident when targeting a different species and that’s exactly what Alan Muller did when fishing prawns for perch last winter.
Trying to tempt one of the few big perch that a local commercial, Alan found himself constantly being beaten up by hard fighting double figured carp that certainly tested his perch set up to the limits. Being a lover of float fishing he wasn’t complaining and now regularly returns in the traditional close season to get his angling fix, before his preferred rivers reopen and his quest for catching monster barbel begins.
Alan classifies himself as ‘old school’ being bought up using watercraft to locate his fish and traditional float tactics to outwit them. ‘Once the rivers open you will find me spending the majority of my time targeting barbel and during this time rarely visit a Stillwater, yet once these close I have to get out and its species such as roach and perch that I prefer to target, yet just watching a float dip in the margins then disappear and the sound of my clutch screaming as a carp heads of to the centre of the lake is a s close to the power of a barbel as it gets and the frill of the fight and the fun of doing something other anglers rarely do these days is refreshing,’ he remarks.

Anglers Mail Rating: Having the lake to himself and knowing the venue like the back of his hand, fish are guaranteed.

08:00
Arriving at the lake Alan’s has already made his rod up and with minimal tackle quickly assesses the wind direction before deciding on four swims that he will bait and rotate during the short morning session.
‘What I love about this style of angling is that you don’t need loads of tackle, just a rod that I made up at home, a landing net, mat, bucket with bait along with a small bag which has items such as terminal tackle, scales, camera and a flask. This allows me to keep mobile, just like being on a river, taking a fish, maybe two from each swim before baiting and moving on,’ he comments.

He seems undecided at first to which bank to fish. ‘This wind is a north and its cold and I’m concerned the fish aren’t going to like it in there faces’, he mentions.

08:10
Not wanting to put all his eggs in one basket, Alan finally decides to bait two swims on the windward bank as well as two on the bank with the wind of his back and proceeds to bait up.
‘What I’m going to do today is to bait each swim down one margin with a handful of hemp along with two or three broken prawns. Before doing so, I place the rod on the ground as I’m going to be fishing right under my rod tip in every swim,’ he adds.
Leaving the swim to rest for ten minutes has a quick cuppa whilst deciding on what swim looks like producing a quick bite.

‘Bait for today is as basic as it comes, king prawns and hempseed as loose feed. I also have a few mussels in my bag just for an alternative, but rarely have prawns ever let me down. I keep a small pole cup also in my bag just in case I need to bait up really accurately. I also find that hemp and prawns that are a little past their sell by date better so always keep an eye out for any going cheap in the supermarket, so although I have had to pay for a day ticket, the cost of the bait is so cheap it counterbalances this,’ he explains.
He also tells me that in the winter when targeting perch he replaces the hemp for red maggots, however with the lake containing so many silver fish he’s decided against this as it will only attract unwanted species.

‘Everything about this session is about keeping things simple, moving around as well as using balanced tackle. The rod I’m using toady is an old Normark Titan 13’ Match rod which I’m teaming up with a small Shimano reel loaded with a fine 0.17mm mono, approximately 6lb. At the business end I’m using a small 0.4gram pole float which is virtually cocked with a 0.3gram inline Olivetti and positioned at half the depth of the swim and locked in position with a float stop. No hooklinks here as knots produce weaknesses, so its 6lb Gardner HydroFlo mono straight through to a size oversized size 14 barbless hook with is tied on using a grinner knot. The most important piece of kit in my tackle box today is a plummet which I use in each swim to set the float an inch over depth,’ he remarks.
08:30
Instead of plummeting the depth right where Alan’s baited I watch as he drops the rig short as not to disturb any feeding fish and notice how quietly this is done. Even with the water so murky everything is completed in an extremely stealthy manner not to spook any fish. After hooking on a prawn and lowering this into his swim just of the rod top I’m not surprised to see Alan bent into a fish within twenty seconds of the bait settling.

‘Well that didn’t take long and this feels a good fish by the way its staying deep and hugging the bottom,’ he reveals. After a few minutes of steady pressure the rod does its job and the fish, a common of around 10lb glides into the landing net and Alan rubs his hands in anticipation.

The common’s a great start yet I’m surprised as Alan risks another cast and instantly hooks another carp. ‘This lake seems to allow an angler to catch a couple of carp quickly, anymore and they seem to spook for the rest of the day, so by not being greedy and taking just two means that I can return later and catch almost instantly again,’ he comments. Proving the point Alan baits the swim with a handful of hemp and broken prawns before moving on. Repeating the process of plummeting he takes four carp from his three other baited swims in the next ninety minutes before returning to his original position.
‘I’m not surprised that the corner swim with the wind blowing right into it failed to produce, yet this just shows the important of swim selection and how an angler can get it wrong if approaching a venue in a static manner,’ he remarks.

Alan’s unhooking mat is only used on the bigger carp with most being unhooked in the net and creates some comfort to his knees during the session. ‘I’m not a great lover of chairs as most are two heavy and high which not only makes an angler lazy but reduces the stealth factor when approaching a swim. If I were here longer then a small lightweight chair maybe an option, but for now I’m happy to kneel down on my unhooking mat which gets me right down close to the water level, a position where I can see any slight movement of the delicate pole float.

10:15
The suns beginning to show as just like the action the air temperature is rising. There’s few carp sucking at the willow pollen that’s floating on the surface and knowing this, Alan edges his float even closer to the marginal cover knowing that the carp will be looking on top of the shelf for food. It doesn’t take long for the float to sail away and once again a healthy curve on the rod to appear.

‘ There’s no need to cock the float right down, in fact its best to have plenty showing as these carp brushing up against the line will create line bites so its best to ignore these and wait for the float to sail away in un-missable fashion,’ says Alan.

The action continues, rarely does the float sit still for more than a couple of minutes and I watch as Alan lands further carp. ‘The great thing about using such a natural bait is you never know what’s coming next. I’ve caught plenty of good tench here as well as the carp that run to over 30lb and with them averaging double figures you need to use reliable tackle and you never know when a monster perch will show. If I loose a fish its inevitable from a hook pull, however with a forgiving but powerful rod and a clutch set correctly rarely does this happen,’ he comments. The next fish is a well conditioned mirror, not the biggest and I can tell that Alan’s somewhat disappointed at the average size today which is below standard, however it’s all about to change.

11:45
Moving back to the swim with the most prominent feature within the lake Alan soon finds himself bent into a better fish that once again keeps low. After around five minutes a few bubbles start to appear and the pole float shows that the fish is tiring.
‘The bigger fish in here don’t tear of like the smaller ones. I remember playing a fish for over half an hour only for the hook to pull at the last minute. I saw the fish it was a big common in the mid twenties and just plodded away under the rod tip, proof you can’t ignore the margins. This one doesn’t feel as big but it’s certainly going to be the biggest of the day,’ he remarks. 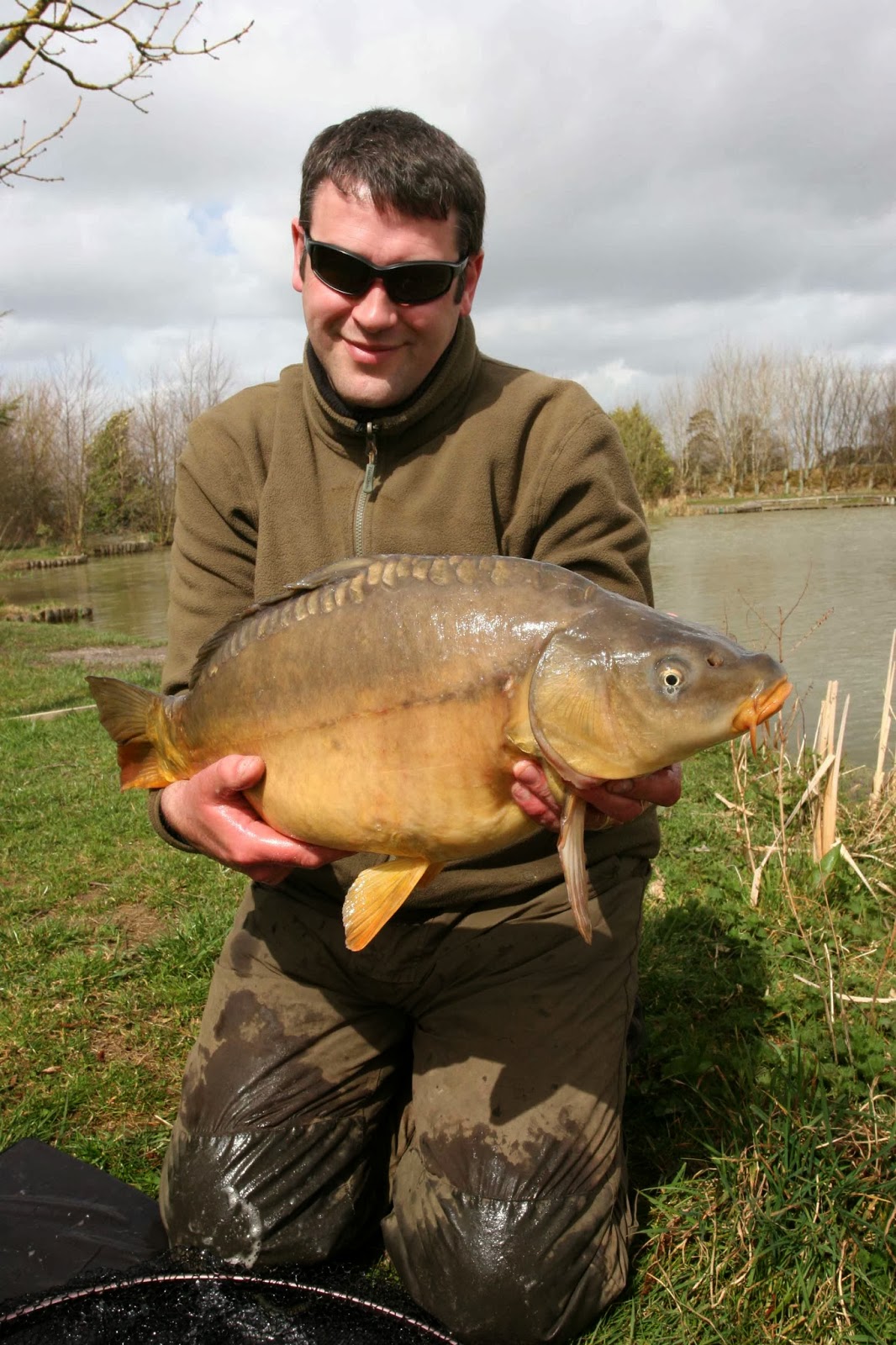 1. A good pair of polarising glasses and peaked cap are important for removing surface glare.
2. A large circular landing net is far more manoeuvrable than a big triangular net and allows fish to be unhooked easily within it.
3. Removing weaknesses is important when targeting big fish on light balanced tackle and with line diameters so fine these days I can get away with quite unforgiving mainlines without compromising on finesse.
4. Placing shot on mainline is a recipe for disaster so I use an inline Olivetti locked in position with a float stop.
The End Result –
That final carp certainly was the biggest of the day, an immaculate mirror of around 15lb that shows no signs of past captures. Maybe it’s a clever fish that safely hunts in the margins, far away from most anglers’ baits.
‘It’s been a great morning but running my own business means I cant fish too many hours in the day, maybe that’s why I have a love for barbel. It’s now just before midday, less that four hours fishing and I have lost count of the carp I’ve caught, definitely more than a dozen. Fishing rarely gets better than this,’ he remarks with a big smile on his face.