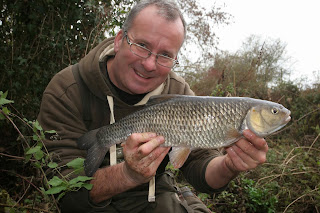 When I revert to having to use bread with chub my target it means only one thing and that is, it’s tough out there.
Arriving at the river at 8am I find the car park empty and one look at the river tells me that I have made a sensible decision as its really low and clear with a tinge of green to it, however it feels strange as usually I emply this tactic when its really cold, yet today it’s a comfortable seven degrees at dawn.
Putting my finger on exactly why the last six weeks has been probably the worst in my angling history is difficult but I blame the long cold spring and the short hot summer we had. Although some species of trees have dropped their leaves in the last couple of weeks others are still green and this slow drop into our lakes and rivers just isn’t conducive to catching as the rotting of these just sours the water and makes presenting a bait efficiently almost impossible at times. Its not just the trees that are causing a problem, it’s the weed as well as just take a look at the image taken which shows patches of weed still in the middle of the river. This should have gone weeks ago, yet its still giving the fish areas to hide within and you can bet that below this there is still an abundance of natural food. All in all not great, yet things can only get better and I’m hoping for a really cold winter then an early warm spring which should get things back to normal. 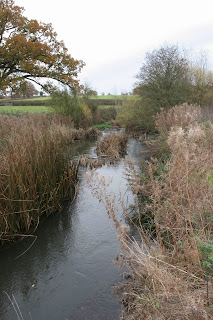 Travelling light is essential if you want to cover as much ground as possible, so all I take is one rod a landing net along with a rucksack containing the essentials such as camera, scales & sling, bait, tackle box plus a couple of banksticks (rarely used). Having fished the stretch for years I have a couple of swims that I initially want to try as its always good to give the banker swims a go as this more often than not produces a couple of fish and sets the day up. This may mean walking far further than most as my best swims are rarely together, often being many hundreds of yards apart but fishing these before anyone else is the key to getting results. If you fish a swim after someone else then expect it to be ten times harder, in fact I rarely bother.
Another area that many an angler needs to work on is the way they approach a swim as dropping all your gear right next to the river then waving the rod around as you set up as well as sending your shadow across the water will only spell disaster. I like to place my kit well back from the river bank, then take just what’s needed into the swim, often crawling in on all fours. I will have my rod in my right hand with the feeder loaded and flake already on the hook along with landing net in my left. The less movement made the more fish you will catch and attention also needs to be paid to the sound of how the feeder hits the surface. In fact their shouldn’t be any sound at all. With the feeder held in my left hand I just swing this out, almost laying it on the surface, then watch as the line fizzes across the surface then stops. This is when I click the bail arm, settle down and watch the rod tip. In some swim a bankstick, sometimes two will be needed, yet I always try to avoid using these and hold my rod, pointing the tip towards where I have positioned the bait and keeping it as still as possible.

To be honest, more often than not if there are chub in the swim the bite will come within a couple of minutes so its no hardship to hold the rod and stay still especially as after ten minutes I will be moving on. If I get small pulls from cagey chub then I will pull six inches of line of the reel and hold this between my fingers and when the next pull comes give the fish this line, if the bite is still their after giving this out then hit it!

Anyway enough about what to expect and do and back to the session. Creeping into the first swim I notice bread crumb pressed into the mud. Obviously it’s not just me that’s finding it tough and a sure sign that the swim was fished the night before, probably after dark as this would have been eaten by the birds during daylight. Swinging the rig out it land quietly, settles on the bottom and I take up a position just like a heron stalking its prey. Small pulls are forthcoming yet even after giving these some line the strikable bite fails to come so I move to my second best swim. This swim is far bigger and allows to casts to be made, one to the head of the pool where the water rushes in, and the other to the tail of the pool where it shallows up. The top produces nothing yet as soon as the feeder hits bottom at the rear of the pool the rod taps and pulls round yet on striking I instantly know that the fish has been fouled hooked and a chub around 3lb comes in backwards. I’m off the mark so to speak but not in the way I wanted so continue to drop a bait in another five swims before the next bite comes. Again the bite comes within seconds and on striking I know I’m into a much better fish. The swim is narrow and fast and all I can do is slowly ease the chub upstream. I’m using six pound Gardner HydoFlo line straight through, a Fox barbel rod fitted with a 2oz tip and a size 6 barbless Nash Fang Gaper hook easily capable of extracting whatever chub I hook, yet in the fast current if too much pressure is applied then there is always the chance of pulling the hook. Eventually a good chub slides into the net, not a monster but weighing 4lb 12oz it’s a result, especially after the spell I’ve been having. I try another two swims without any signs before a couple of anglers arrive, time to move on to another stretch, yet as I look downstream I can see an angler on the far bank and not wanting to cover covered ground decide to head to the Blackwater, a river far easier, yet the chub average smaller.

It’s a long story but in brief I never made it to the river as my van broke down again so instead of the intended eight hour session had to settle for just three, yet still ample time to get the rod bending.
A couple of important areas to pay attention to are the size of the feeder used. Basically use the smallest and lightest you can get away with. I usually use a tiny 10gram Drennan cage feeder filled with liquidised bread and when you get a bite strike as you need to set the hook. 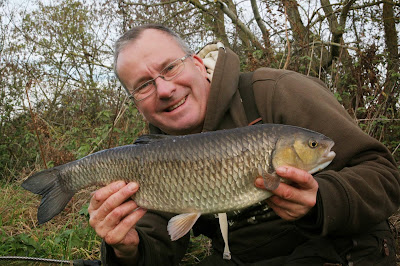 Im sure I will have to return with this approach later in the year, hopefully not because of a bad run of form but more in the hope of keeping a run going, yet this will certainly coincide with artic conditions as, the colder it is the better this tactic is.

See you next week, hopefully with a monster roach!
Posted by Unknown at 09:48