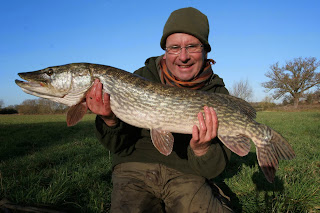 Popping baits up for pike.
Duncan Charman – The thinking angler.
Written for German magazine in 2013.


The more I think about presenting a deadbait to a pike the more I think about popped-up or critically balanced baits. Small jack pike feed primarily on small live fish; their aerodynamic body shape, large fins and mouth are designed perfectly for this. However as they grow bigger they become slower and have to adapt at picking up dead or dying fish directly of the bottom. Although they can do this, it’s probably not the simplest task, so if an angler can help make this easier, surely it has to be advantageous. Another reason for learning how to produce a slow sinking or popped-up bait is when the angler is faced with weed in a lake or needs to present a bait over a silty, soft bottom. Obviously casting a standard frozen deadbait out into a weedy lake using a standard running ledger rig will only see the bait being pulled into the weed, masked and completely out of sight and inaccessible to a hungry pike, so rigs need to be looked at here, ones that will allow the bait to sink and rest on top of it. 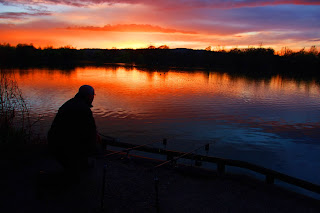 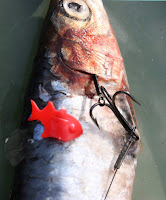 Before looking at critically balanced deadbaits (something I will cover in a follow up article), lets run through the easier task of presenting a popped-up bait. Most anglers achieve this by simply using foam poppers which lifts the bait directly above the lead. This method certainly works and produced my personal best pike weighing 31lb 10oz many years ago, yet this came from an un-pressured lake and had probably never been caught before. The reason I decided to pop-up my baits on this venue was because every evening a shoal of small fish would move through a channel between two lakes, returning around midnight. What I wanted to do was try a mimic one of these fish and after thinking carefully about my rigs, changed from a standard bottom bait to a pop-up, a decision that was to see my catch rate go through the roof! Don’t get me wrong, I’m not obsessed with popped-up baits; they seem to work better on some lakes than other, so when approaching a new venue I will always start with a bottom bait, one that sinks slowly along with one popped-up, either a few inches or directly of the lead. Once I know what the pike prefer then both rods will be swapped over so they are both fishing the most effective method. My problem with placing big bright foam poppers next to a deadbait, especially on pressured water where pike have seen it all, is how it looks. Some anglers add a couple of bait savers, even a few brightly coloured beads and before you know it the fish looks more like a Christmas tree than a deadbait! On these waters I prefer to place a buoyant balsa stick within the fish, however most venues you will see an upturn in your catch rate just by using a visual red popper. A couple of bait savers probably work in the anglers favour as they make a sea deadbait look more like a natural fish, such as a roach, yet if I’m allowed then a roach deadbait will be my preferred bait when using a pop-up.

Presenting a pop-up is relatively easy on a clean, hard bottom and a simple running lead will do, however instead of placing the lead directly on the main line, I tie this onto a short length of 10lb mono which has a run-ring attached. There are a number of reasons why I do this, one is if the lead becomes snagged then the mono will break instead of my 40lb braided mainline, releasing the rig and avoiding leaving a baited rig in the water. Another is I rarely fish over a hard bottom like gravel as these areas are cold in the winter; hold very little, if any food for fry, so I see no reason why a pike should be in these areas. Areas of silt, bloodworm beds, dead weed or leaves creates cover not just for the pike but fry, offering food for both, yet a lead directly on the mainline will sink into this causing a loss in resistance, something that a pike will notice and if so probably drop the bait. Using a short link will allow the lead to sink into whatever the bottom is made up off, leaving the rig resistance free. If I’m fishing over dead or dying weed I try to find out just how far of the bottom this grows. If I feel it’s around two-feet then the length of mono between lead and run-ring will be lengthened to two-feet. A word of warning here is when casting, watch the rig in the air and just before it hits the surface, feather the line. This will throw the bait out in front of the lead and avoid the rig tangling.
The great thing about using popped-up baits is runs are usually, what I call ‘short screamers’. The reason for this is when a pike finds the bait it will stealthily approach it, then using its body shape and explosive acceleration produced from its tail hit the bait hard as it thinks the bait is alive. I see very little advantage using drop of indicators when fishing baits popped-up and prefer to use carp style bobbins, simply tightening up to the rig, dropping the rod tips down under the water and as close to the bottom as possible before slackening the baitrunners right off. Runs will see a few yards of line ripping from the spool, usually followed by the line going slack. This is when the pike has the bait in its mouth and has stopped to swallow it, so quickly wind down until the fish is felt and strike.
Moving on to a more technical rig is the ‘Hinge-Rig’ which presents the bait a few inches of bottom, right in the eye line of a pike. It’s a rig that is producing some fantastic results for me at the moment but does take some getting use too. The photo shows the components to this rig but basically a swivel splits the wire trace creating a hinge effect. Onto the swivel tungsten putty is moulded so it slowly sinks the bait, leaving it to sit just of bottom. It’s a fantastic rig, especially on pressured waters where the pike have seen it all. Very, if any angler will be using this and it’s a rig that gives me an edge over others. 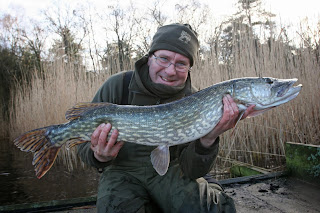 Another very important point that I would like to point out is the use of braid as a mainline. I have to admit, in the past I’ve never been a great lover of braid but since converting to it during my eel fishing, have bought it into my pike fishing and can’t see me ever reverting back to mono. The benefits of braid is not just being able to spot bites much quicker, due to its lack of stretch, but when a pick up occurs, a short sharp strike will see the bait being struck off and the hooks being set. If you’re suffering from missed runs or pike shedding the hooks during a fight, then it might be time you tried braid, yet before doing so make sure you know how to tie a Grinner or Palomar Knot as a standard Six Turn Blood Knot will let you down. A quick look on the internet will give you a step-by-step visual demonstration of how to tie these.
Next time I will be looking at Slow-Sinking or Critically Balance baits, far fiddlier, far more technical, but without a doubt well worth the effort.