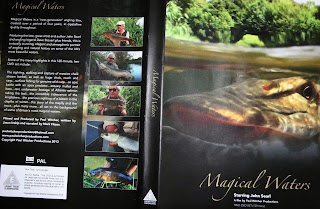 When ‘A Passion for Angling’ was released back in 1993 it bought a breath of fresh air to how we viewed angling through TV. Was it the relationship between Chris Yates and Bob James that made this production so unique, probably, but for me it was their childish excitement of the thought of going fishing, wherever and whatever for that was simply enthralling? Add to the equation Hugh Miles and well it was recipe for success and although many times we’ve been promised follow up videos to surpass this, well let’s be honest, none have even come close. Well that was until I sat down one evening and watched ‘Magical Waters’ only to be completely drawn into another angling masterpiece and enthralled once again.
Starring the late John Searl, artist extraordinaire and extreme passionate angler it was obvious that the initial seed was planted to create another masterpiece. Just the words describing water during the first few minutes captured my imagination and from then on it just oozed quality from start to finish.
Filmed during the heat and height of each day so that the film could bring crystalline lighting quality, no wonder it took four years to create. Covering a multitude of different species from massive Avon barbel, chub and roach to the lady of the stream, grayling, captured in what I consider anglings finest elements, snow. Chasing truly amazing and rare wild carp to the most temperamental of our species, not quite coarse but in my book they classify, mullet. Big river carp and pike have always fascinated me and feature within this video and the venue I love more than any, Frensham Great Pond, well watching these guys just brings a smile to my face and the mix of under water footage, which is as good as I’ve ever seen, is just breath taking.
Words that come to mind are visually stunning, elegant, humbling, passionate and atmospheric and if you loved ‘A Passion for Angling’ then you too will love ‘Magical Waters’.

Available from – www.paulwitcherproductions.com
Posted by Unknown at 10:57