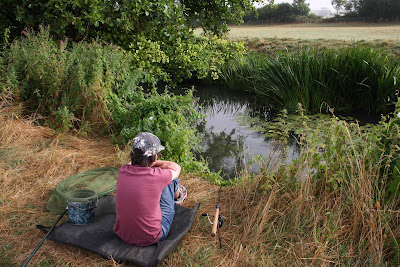 Saturday was spent backing up over a 1000 wedding images taken at the wedding on Friday. Having a Thai bride I was always going to be on the go clicking away more than usual yet the day went really well, despite the hot conditions and with the raw files now doubled up and placed on disc as well as on my desktop I can relax for a while, although with the couple going to live abroad in just three weeks it means I will be tapping away on the keyboard in all my spare time with fishing for myself being limited to overnight sessions on the Thames.
Sunday morning I arrived at Frensham Great Pond at 7.30am where I met Chris, normally a river angler who wanted to broaden his knowledge of FAS venues as well as brushing up on his Stillwater techniques. The first rods and method shown was, of course the deadly helicopter rigs and by 8.15am we had two in position. An hour past without any indications so I decided to introduce a few balls of groundbait at waggler distance and come fifteen minutes later the swim was like a Jacuzzi! A couple of bites were missed so Chris placed a heli-rig on top of the foaming area and within five minutes was into his first tench. Eight more followed including a new personal best weighing 6lb 7oz. I had a quick go on the float and lost a carp, the first I’ve hooked for years plus landed a tench. Come 3pm the action had slowed, yet still the odd fish came, however with the temperature reaching the high twenties and with no cover to protect us it was time to leave. I know Chris had his eyes opened and will be back enjoying this special venue very soon. Unfortunately during the session I pulled a muscle in my back which was slowly becoming increasingly painful. 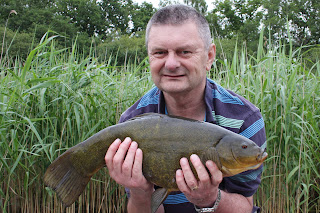 Monday dawned with stormy weather forecasted. Knowing that I have caught well after a good downpour I headed to the Thames late in the day; however before doing so I had a freelance photography job booked in for Anglers Mail, a ‘What Selling Well’ feature at Experience Angling in Newbury. Still in pain, I met Chris at around 8pm and by 9pm we had the rods out. Thunder and lightning lit up the Chilterns and I fell asleep with great expectations. The standard dusk bream never showed and at midnight and again at 4am I found myself recasting in the hope of tempting a carp, but it wasn’t to be. Chris managed two bream, so at least he’s off the mark but come 5.30am we found ourselves leaving for home, carpless once more. The forecasted downpour which I was hoping for never materialised, nor did they on Tuesday, so with by back now killing me I decided not to push my luck come the night and after spending the day manipulating wedding images was happy to find the comfort of my bed.
Wednesday was spent once again keyboard tapping and come the end of the day I found myself on the better side of manipulating wedding images. I also managed to complete a question for CAT and sort out the tackle needed for another guiding day at Frensham on Thursday. 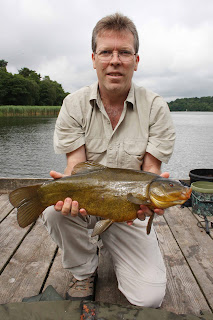 I was amazed to see that we had some rain overnight, yet it did little to cool things down and as I carried the kit out to the platform at Frensham sweat poured out of me. The back pain however had eased and come 8am my customers had arrived for what was intended to be an educational day on more modern rigs as Chris and Robby, keen fly anglers, were wanting to get to grip with these and with Chris living very close to Frensham, he wanted to know how to tackle such a daunting water. The wind had swung to the south, not good for this area, yet after casting the feeder rods out we didn’t have to wait long before one ripped of and Robby landed a new personal best tench of 6lb 2oz. Chris soon had one in the net so it was time to set the waggler rod up for a bit of traditional tench fishing. Although it fished hard come 1pm more than half a dozen tench had graced our net so it was time to move on to the river Loddon in the hope of a barbel or chub. Unfortunately no barbel bites came in our short session on the river, yet Chris did miss a good chub bite and both anglers soon realised just how cunning the chub can be as they watched the rod tip tap and pull round an inch or two before falling back. As mentioned earlier this wasn’t an all out fish catching day, more of getting to grips with modern tactics such as the pellet-lead and helicopter rig, both devastating tactics as well as getting to know two of FAS best venues. Money well spent if you ask me as I know both anglers will soon be enjoying rod bending action from Frensham’s tench and come the autumn I will expect to see a picture or two of there first ever barbel caught on tactics that just cant fail them. 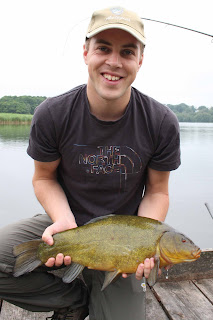 Friday was another early one as Id promised to take my godson Max to the river in the hope of him catching his first ever barbel. We were fishing just after6.30am, both wet due to wearing shorts and there being a heavy dew. Unfortunately two anglers were already on the river, sign of the times, and although we had a couple of knocks in our short three hour session, Max’s first three foot twitch failed to materialise, however we will be back for revenge very soon. After getting a few things done I managed to pick my Thames fishing partner up at 6pm, however tonight was all about doing a bit of homework on another river with carp in mind. Talking to one angler we found out plenty about the river, saw a few good chub as well as knowing that although a few barbel do exist, they aren’t that prolific. We had walked the complete stretch come 8pm so cast a couple of rods out, however come 10pm just one small chub had found the bottom of my net.
With a wedding booked in on Saturday and lots of things piling up in the office I’m glad to have a couple of days free early next week to get on top of things before having a couple of guiding days booked later in the week. Once again if I get out for myself it looks as if it will be short overnight sessions, we will have to wait and see.