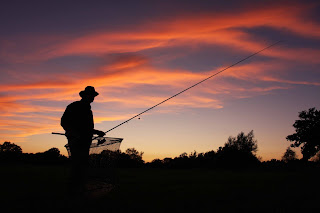 Venue River Loddon – Stanford End – July 1st 2013
A fuller report will appear in my weekly blog but in short the first weekday barbel teach-in proved a real success. Their was some confusion around starting time as the handbook states that the river is closed from 3pm, however this is to give the river a rest before the teach-in starts at 6pm. Disappointingly only five of the booked in six anglers turned up, which wont happen next year as anyone that takes one of these limited spaces then fails to show without informing me will be blacklisted from future events! These events are very popular, so if you cant make it then please let ‘The Creel’ know as someone else can be found. Another annoying thing about these sessions is the anglers that fail to read their handbooks, newsletter and sign on the car park gate. I hate having to ask anglers to leave, yet it has to be done to allow the anglers on the teach-in to move around. Please read your handbooks before leaving home as there are two more teach-ins on the 6th and 29th of August.

On a good note the five anglers that attended were a smashing bunch of guys, all getting on, respecting each others bank side space as well as helping each other out after I left at around 10.30pm. The weather was great, the river had some colour and most had opportunities to put a fish on the bank, however hitting chub bites is something that comes with experience. Mike landed the first barbel of around 5lb around twenty minutes after casting in, before Barrie called to say he had one, his first ever which weighed 6lb 8oz. Unfortunately he went on to loose a couple, one from a hookpull, the other finally finding a snag, but in a way he learnt the hard way and will in future show a hooked fish who’s boss in future, that is after the initial run! After I left Mike sent me a text to say that he had another two barbel, the best estimated at 11lb, three barbel in a session, good angling!

Thanks to Chris, Authur, Mike, Barrie and Ross for a great evening and keep me informed on how you get on.