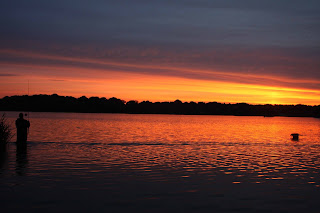 The weekend was spent enjoying the heat wave along with getting ready for a longish session at Frensham Great Pond with Paul Garner.

Arriving Monday mid morning I headed for a swim known as The Oaks as very little was happening on the tow path bank. It’s an area that produces during the day along with giving some shelter from the baking hot sun. Unfortunately it isn’t the best area for float fishing as its very shallow, so this session was all about distance feeder fishing. Setting a marker float at around 75yards I soon had a couple of dozen balls of dead maggot laced groundbait in position as well as two maggot baited heli-rigs. An hour past before an alarm screamed and the first of three quick 6lb tench graced my net. I was hoping for the flood gates to open but when Paul arrived around four three hours later I had failed to land anymore. Paul decided to fish slightly differently with flat bed feeders and plastic caster on a hair, fished over groundbait laced with casters. Come dusk I think it was three two to the plastic. We were expecting an eventful night due to the heat of the day, yet things slowed. Rudd were showing over our areas so Paul decided to change tactics and immediately landed one around 2lb, was this a coincidence? No, as two more came quickly. Not one to miss a trick I was soon helping myself to a few bits and bobs from Paul’s tackle box, however by the time I cast out things had quietened down with Paul taking just one more. After an amazing the sunset we settled down to what turned out to be a very slow night with just two rudd falling to my rods. Just before the alarm clock sounded at 4.40am Paul was once again landing a big rudd but it was to be our last as the sun rose the tench decided to feed. It was a strange session with no consistency as I would land a couple before the swim died, then Paul would land a couple. Come 10am and before it became to hot we decided to call it a day, both landing around a dozen quality fish each. Neither tactic seemed to have an edge, yet the effectiveness of plastic is beginning to take hold of me and I will certainly not be afraid to cast these out in the future. I think Paul was well impressed with the fishing and his words ‘well where else can you catch quality fish like this in these conditions’ my thoughts exactly. 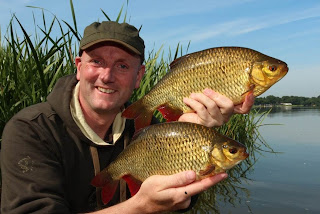 Wednesday dawned once again hot and I was glad that my planned guiding session for the week was to start early. Meeting my good friend Mel at Badshot Lea Great pond our intensions were to try and catch grass carp using a particle approach. Mel had bought his bait boat and I had prepared the bait. With all rods in position we sat back and awaited events. We were fishing at around seventy yards and with the surface dead calm I noticed a big patch of bubbles over my right hand rod and said to Mel, that rods going to go. We had agreed to take turns in runs and moments later the expected rod produced a bite which saw Mel land a grass carp of 12lb 2oz. My turn came soon after yet this turned out to be a bream. An hour later and Mel was into his second fish a 7lb mirror and soon after re-baiting and whilst I was on the phone took another weighing 12lb. That s was to be our lot and with the heat rising every carp in the lake took to the surface. Happy with our results and knowing that catching lots of grass carp was just a matter of time we decided to call it a day and return as soon as the weather changes. Watch this space… 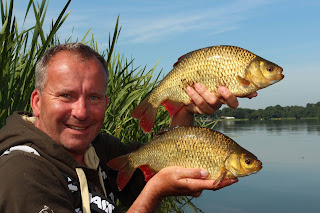 Thursday I was expecting to head to Oxfordshire, as a photographer for one of the Nash Peg One consultants with a tench feature in mind. Fortunately the consultant requested that I called before leaving as the lake was fishing hard and although he started at dawn, come 8am just one 6lb tench had fallen. Holding fire I awaited the call that more tench followed, yet although they did, they weren’t big enough to create a worthy feature. Tench can be tricky at best and once they have spawned they can become frustrating, almost impossible to catch and I know that if this consultant struggled then the likes of myself would have probably blanked. The weather had played its part once more and although most anglers look forward to the summer, sleeping under the stars in warm conditions, I hate it, as I go fishing to catch fish and this weather, when it comes to consistently catching is as bad as it gets. On a good note, holding fire for a phone call did me a big favour as I spent the day doing one of those, feel good jobs, cleaning the house and with a wedding booked in at Wotton House on Friday, at least I can come home, have a beer knowing that come Saturday I can have a well overdue lay in. Roll on Saturday! 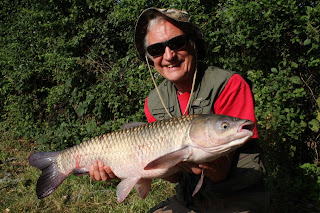 I was hoping for a quiet week next week yet a quick look at the calendar shows no signs of letting up. Sunday sees another early morning start, guiding at Frensham which means tackle preparation come Saturday. This will be an instructional day explaining all that’s needed to tackle this venue come day or night and with feeder rods cast out, hopefully the odd tench will come along. A freelance photography job for Anglers Mail will take up most of Monday, but I’m hoping to get out on the Thames that evening. Tuesday will be a day key board tapping as the previous days photography needs words adding, around 2500 in fact and again my reward for completing these will be another night on the Thames. Wednesday is relatively free however I will need to pop down to Badshot Lea Small Pond to help out with a Nash/FAS Junior floater fishing evening. Thursday I have two customers’s booked in for a split day of explaining modern day tactics. The day will be split between Frensham Great Pond and the river Loddon, chub fishing. If the heat continues it certainly will be a sapping energy day, yet sometimes going that extra mile will reward you with a regular customer for the future and on Friday I will be having a relaxing day with my god son Max, hopefully catching a few fish and showing him that fishing comes miles before social media and computer games, oh and another wedding come Saturday!
The following week is also busy, one wedding appointment and three days guiding! Will I ever get my teeth into those Thames carp!
Posted by Unknown at 12:16