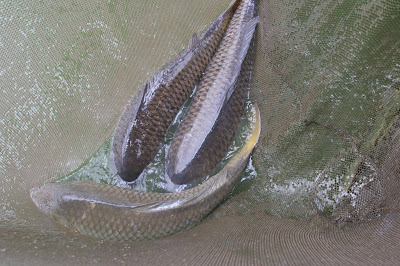 What happened to the storms forecasted on Saturday? I had visions of it raining heavily all day and loads of thunder and lightning. Once again it seems that the weather forecasters are always edging on the side of caution just so another Michael Fish forecasted doesn’t happen. Unfortunately for me when it did throw it down at around 2.30pm I was just leaving a quaint church on the south coast with a lovely couple that had just tied the knot. The English weather, don’t we just love it!
Sunday was my first proper lay-in for ages and I made the most of it, rising around 9.30am. Luckily I managed time to get my weekly blog up on the website before doing the family rounds.
Having spent so many hours bankside as well as loosing quite a few days through manipulating wedding images I needed to get on top of things in the office as I felt seriously behind. Come Tuesday evening I sill seemed a million miles away and with two days guiding booked in for Wednesday and Thursday knew I was going to have to prioritise my time better in the future, especially knowing that my actual fishing time for myself was taking a back seat. 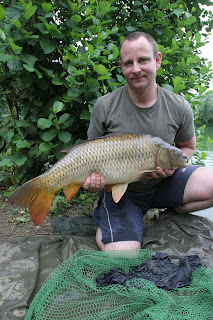 Wednesday was all about catching fish and with one of my regular customers booked in knew the perfect venue, Broadwater. This venue really responds to constant, accurate casting and using the pellet-lead and small baits knew that it wouldn’t take long to get a response. Fortunately I just about made the venue as I have had loads of problems with my van lately and with an intermittent fault knew it was just a matter of time before she broke down. Well a few miles from the venue she lost power sending loads of black smoke out the back. I limped into the car park hoping that she would start later and I could get her to my mechanic. Fortunately I managed this and the fault which I thought was going to be the turbo or injectors and expensive turned out to be a split hose on the turbo system. Back to the session. Well after locating the majority of carp using our eyes we simply cast out a comfortable distance before clipping up and adding a line marker. Loading the lead with scolded pellet deposited six loads, attached the short hooklinks that contained small trimmed down baits next to small hooks and cast out. An hour past before I received a run, yet looking at the bubbling I knew it was only a matter of time. Mark always wants me to fish, as he can watch and learn and was getting to grips with casting, hitting the clip and lowering the line whilst the action in my swim started to hot up. Mark eventually got of the mark, yet I could sense his frustration as by now I had landed a number of carp, yet I knew his time would come, and once the accurate casting was mastered he was matching me fish for fish. We were hoping for a twenty, but the biggest carp went 17lb 12oz which provided Mark with a new personal best, beaten his sardine caught carp from Old Bury Hill whilst zander fishing by 2oz. When we packed up at 4pm, nine hours after starting Mark had taken around fifteen carp, myself around two dozen to 14lb, in fact the action was so frantic at one point I had three double figured commons in the net at once, not bad for a day when we only saw two other fish caught. Mark left a happy man, a master at fishing the method and now knows the importance of working a swim. 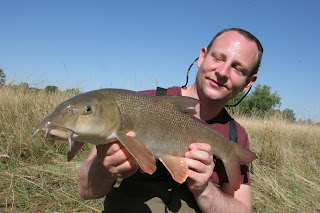 The following morning we met at 8am on the banks of the river Loddon. The weather forecast wasn’t favourable and knowing that Marks first Loddon barbel had proven elusive in three previous trips knew we were up against it, yet in the second swim, just when Mark mentioned that my knew found wonder bait wasn’t working, saw the tip rapping round. In the net I could sense Marks elation and although the barbel wasn’t massive weighing six pound I knew it was a special fish. We were hoping for the flood gates to open, yet come 5pm, after fishing a further ten swims and with temperatures reaching 33 degrees no further action was forthcoming. After working so hard I felt we deserved another fish yet I know that the Loddon barbel flood gates are about to open for Mark.

Totally exhausted I was hoping for a lay-in come Friday, followed by a day in the office, yet a call from my mechanic to say my car was ready saw me collecting my dad at 6.30am as he had planned a days fishing with my girlfriends dad at a day ticket water that I had been wanting to visit. Mother needed her car so the office duties had to wait a day and come 7am we found ourselves in the carpark. Mick settled for the match lake whilst dad and myself headed to the carp lake. Unfortunately the owner informed us that the lake was fishing hard and with the vast majority of the lakes carp population up on the surface and with surface baits banned and no zigs we felt that we were wasting our time come 1pm. Dad did his usual and sneaked one out, on a fake piece of bread, fished zig style but it wasn’t a carp but a trout that had been missed from the nets when the fishery was turned from a trout lake into a carp water. I adopted the tactic of fishing a piece of meat under a pole float, next to a snag that contained carp close to the margin and should have caught, yet the one bite I received came when I wasn’t holding the rod, should have known better! The lake we fished is very picturesque and contains some very good fish and although my first visit wasted one I will remember I do intend to return later in the year when the carp drop down in the water. 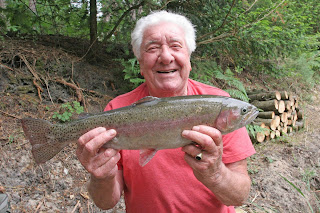 You may have missed my ‘Winge of the Week’ and ‘Product of the Week’ last week; sorry it was just one of those things that had to take a back seat.
At long last I have a car that’s functioning properly and look forward to some carefree driving as well as finding some time to start putting in some serious fishing for myself with my mate Chris and the week starting the 12th looks good, however before doing so I need to get on top of things in the office. On a good note my last few dates for guiding on the Wye have almost been taken with a surge last week, so if you are thinking of booking a date with me then you need to get in touch as I only have four available spaces left.