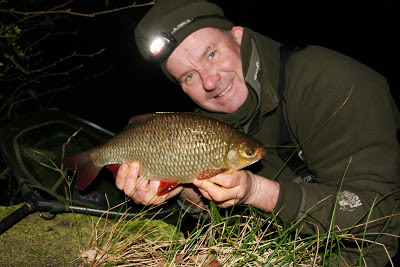 After a busy week I really could have done with a weekend off, yet my newly appointed position with Nash Fish Frenzy and Peg One brings with it fishing shows and with The Big One being held at Farnborough Airfield over the weekend saw me attending this. Saturday was busy and I thought it would be best to get to know a few of the consultants which included Nick Watkins, Dave Green, Lewis Baldwin, Stuart Jupp, Alan Storey and of course my good friend Paul Garner, all of which welcomed me aboard with a very warm welcome. Leaving the show I must say that I felt a bit guilty as all day Alan was making bait balls with the new ball-maker so I asked if on the Sunday I could get my hands dirty and demonstrate this new exciting gismo. The Ball Maker makes perfectly formed balls of sticky pellets and groundbait in a matter of seconds and the interest around the stand was incredible. The Ball maker comes in two sizes, 20mm and 40mm, cost £7.99 and £9.99 and will be available in shops within the next few weeks. I have always said the simplest things are best, yet often overlooked and without a doubt this item of kit will simply revolutionise many anglers fishing.
Id purposely left the start of the week free as after not being in the office for nearly a week knew that I would have loads of things to catch up with. The weather was still painfully cold, yet with a slight increase as the week progresses this seemed a wise decision, yet a quick look at the barometer Tuesday night showed a dismal 1032mb and thoughts of an easy day on Wednesday were forgotten. 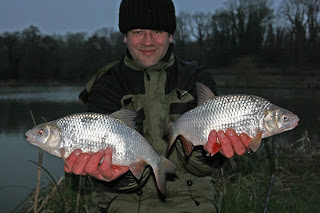 Wednesday dawned in a similar pattern, white cloud, an easterly wind and cold, yet if there is one species that does feed in these conditions, then its roach. For the day I had teamed up with one of my regular customers who dearly wanted to beat an old personal best roach of 1lb 8oz. I had recently visited a new commercial in the hope of a big perch and accidentally caught some quality roach to well over the pound and with the owners telling me that the lake held numbers of two’s thought this would be the perfect venue. Alan decided to fish the float of the rod tip using a small pole float and maggot as bait whilst I took the more specialist approach of helicopter rigs cast into open water. An hour in and things weren’t looking good as neither of us has seen a fish, yet get a bite, however finally one of my alarms sounded, only to see me fumble the pick up and not make contact. I was gutted as the bite had a good fish written all over it, yet more bites followed to both tactics and come the end of play Alan had taken four quality roach on the float, including a new personal best of 1lb 12oz with me taking three, the best weighing 2lb 8drams. Although far from easy, this is the sort of venue I like and with a future visit planned and the days warming up I’m hoping of even better results. 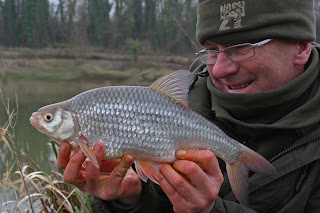 Having put so much effort in to trickling some bait on a little and often basis on a local water over the last few months with little to show, most would have given up, however obviously I’m a gutter for punishment as I grabbed the night gear in the hope of a red-letter session. Unfortunately come 10pm I was on my way home as Id received just one bite, yet this came from a 2lb 5oz rudd so I did have a big grin on my face. If a few more bites were forth coming I would have stayed on but with the atmospherics still ridiculously high I can only imagine I landed my feeder on the rudds nose!
The week was rounded of with a trip to Old Bury Hill in the hope of a big zander, yet I should have known better as experience has told me that certain weather factors don’t favour this species. Arriving at 4pm and teaming up with my good friend Mark we sat it out till 9pm for just one small zander.