A weight of my shoulders - weekly report starting 10th March 2013 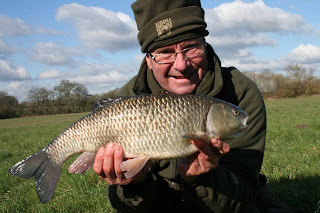 Having crammed in numerous sessions last week I was quite happy to have a weekend of and apart from writing up my weekly blog and preparing the pike kit for Monday, I did just that.
Last week I had to reschedule a barbel guiding day, however with the weather taking a turn for the worse had to rethink species come Monday. After discussing this with my customer we decided that it was worth trying for a pike to beat his present best of just over 16lb. Heading to a local Stillwater with a reputation of turning up a few big fish we really did question our sanity, as the temperature was barely above freezing and couple this with a gusty bone chilling easterly, the temperature felt more like -7! Positioning a couple of dead-baits close in we really didn’t expect much action, yet a couple of hours into the session I watched as the braid tightened on one of the rods. Tightening into the fish Mel momentarily felt the fish but unfortunately the hooks failed to penetrate and we were left thinking if it was one of the high twenties the venue holds. An hour later the same rod was away, yet disaster once again happened with the bait being dropped. To be honest two pick-ups on this venue is a result and is encouraging as it came from a new swim, one I may investigate further later in the week. Fours hours into the session we had had enough, the cold penetrating even the best of clothing so not wanting to waste the remainder of the day we headed of to the new waters that Farnham Angling Club have just purchased so Mel could have an early introduction to them. 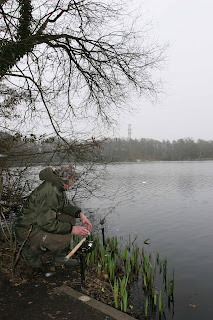 Tuesday was equally chilling with Hampshire just missing the worst of the snow that covered Sussex. The day wasn’t wasted though as I did some research into finding a tench water to concentrate on through spring as well as ordering some new Nash kit and bait for the campaign.
An early night saw an early wake and I found myself on the banks of the Loddon for a rare and final chub session. I had a roach guiding session planned for the day yet due to the raw conditions thought it best to rescheduled this. It was still dark when I arrived and as expected I was the first on the river. Although I enjoyed the session I have to say, how predictable chub fishing is, as I caught from the three spots that I expected too with a few other swims producing not even the slightest of knocks. The remarkable thing though was I rarely catch more than one chub in a swim, yet after settling in my first swim and catching almost immediately I braved another cast. Amazingly a couple of bites soon came before another chub graced my net. Moving downstream two more chub were caught either side of a raft, swims that usually produced. Trying a few swims as I moved back to my original spot saw no more action, yet the first swim once again produced another two chub. The rewarding factor of the day was I was getting loads of steady pulls in the first swim when I revisited it, yet most were missed. Thinking about what was going on in the swim I made a couple of slight alterations and bingo, the bites were hit, a trick I won’t forget in the future. Six chub in a session on this stretch is what’s classified as a red-letter day, however the six-pounder I hoped for didn’t show and I had to settle with a couple of scrapper fives. I wanted to fish a swim upstream but a friend had arrived later, saw I was roving the swims downstream so settled upstream and using similar tactics to me, breadflake, had taken a 4lb brown trout and three chub to 5lb 3oz. Although I will still be guiding on this river, all my chub fishing will be done on a far bigger and demanding river, so it was nice to finish the river season, and say goodbye to the stretch on a high. 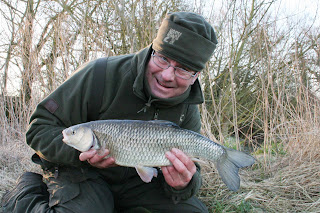 The last day of the season was once again cold, in fact every lake I passed on route was frozen and I was fully expecting my final fling at a big pike to be frozen out, yet I was surprised that the lake was ice free. Settling in the same swim as we did on Monday, using the same rigs and bait it took around two-hours before the alarm signalled a steady run. I have to say the adrenaline had started to pump yet this was short lived as the culprit was a jack. Knowing a big girl could be close by I stayed for a further three hours yet it wasn’t to be and with the sun bright and conditions far from perfect for fishing I decided to take my mum out.
Well that’s it, another river season ends and to be honest I’m glad it has. This winter has been so diverse that the constant swapping of tackle, venues and species has taken its toll and with many options removed, it feels like a weight has been lifted of my shoulders. Time to sort out the tackle, order some bait and start preparing for a serious spring campaign and get back into spending more than a few hours on the bank, I can’t wait, I just wish this awful weather would pass.