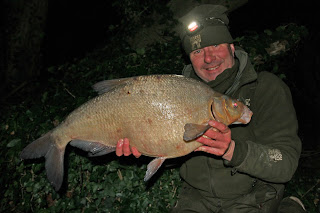 Having had to cancel a couple of recent planned trips recently due to the weather I finally decided that the planned trip to Westhampnett would go ahead, come what may. The weather was once again doing its best to have me rethinking yet even though it was bitterly cold, it was at least dry and I headed south to one of my favourite venues. Meeting my fishing partner Chris at 3.30pm we signed in then headed to a couple of sheltered swims which fortunately gave us good access to the end where the wind was blowing. The temperature was just 1 degree on arrival and as soon as you faced the wind it felt more like -5! No other idiots were on the lake as we deposited around forty balls of Fish Frenzy method mix laced with crushed and whole 10mm Nash Monster Squid Boilies into each swim at around 75 yards range. To be honest we had already agreed that a bite would be a result as well as enduring such cold conditions, yet come morning I was in a daze as a red-letter session had just come to a close which had yielded six double figured bream, the best weighing 12lb 8oz. Unfortunately for Chris he never got into the fish and we agreed that I had just been lucky on my swim choice and dropped my baits within a shoal. This also goes to show just how close an angler can be from success and failure!

With the bream falling at steady intervals throughout the night I didn’t get to much sleep so after writing up catch reports, packing away tackle along with organising the camera kit for a photo shoot with Nash consultant Nick Watkins on Wednesday I grabbed a few hours shut eye before the girlfriend arrived.

On the road early the car was pointed towards Southend-on-sea and two hours later I arrived at Mill Barn Fishery to meet up with fellow Peg-One Consultant Nick Watkins. Breaking the ice in the puddles as I made my way to the fishery did little to raise my hopes yet come 2pm Nick had eventually got the fish feeding and started to take a few carp just into double figures on the new Nash Bugs and Critters.

Thursday was all about getting images manipulated and forwarded to Paul Garner as well as organising the helicopter rigs for a guided session on Badshot Lea Big Pond with up and coming superstar Jake Curry. I was also testing out one of Shimano latest big pit reels on Monday for Anglers Mail so with this also needing writing up it’s all about keyboard angling today.

At last a guiding day that hasn’t had to be rescheduled due to the weather, yet it was still freezing in the wind and myself and Jake had to move because of it. Meeting at Badshot Lea Big Pond at 8am I was surprised to see just three other anglers on the lake. In the past at Easter the lake has been rammed, yet due to the weather most have stayed at home. With a brisk cold easterly blowing and cat ice in the margins it was always going to be tough, however using a proven rig, and clipping up and continually casting finally bought a response and come 3pm five modest bream had been landed.
Posted by Unknown at 07:49