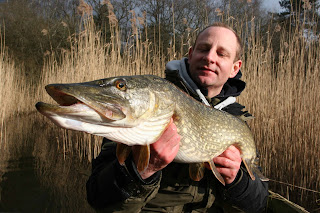 This weeks been manic made up off an after dark session, a full day’s perch fishing on a new venue, two days guiding for pike before finishing off with both days over the weekend spent on the Peg One Fish Frenzy stand at The Big One.
The after dark session was tough, when I left the lake at around 9pm I knew it was cold and the thermometer in the car confirmed this, as it was just 0.5 degrees. In the past I have fished in these, and worse conditions, and wondered how I managed this. The answer is simple; I was catching on a regular basis in the past. It’s amazing just how the elements are forgotten when fish are being caught and you’re working a swim. Unfortunately that’s not the case at the moment and the lake Im fishing, and many others, seem to be continuing in the poor, unpredictable form of last year. 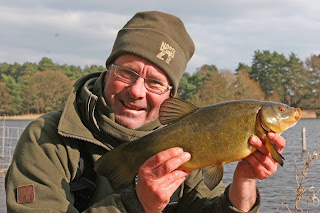 The next day I was up early and heading south with my father and brother to a new venue with perch on our minds? The forecast was for a cloudy day with the chance of seeing the odd glimpse of the sun, yet we spent most of the day beneath a clear blue sky with not a cloud in sight. Not great for perch fishing, however we all caught a mixture of species including perch, quality roach and rudd, tench and pumpkinseeds, yet the monster perch failed to show. 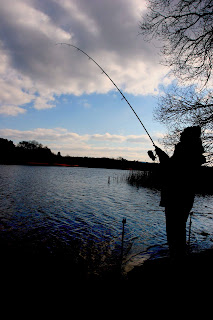 At the end of the week I had a regular customer booked in for two days for an introduction on deadbaiting for pike. Big fish weren’t necessary, so on the first day we headed to Frensham Small Pond. The days had been rescheduled due to the lakes being iced over the previous week and on arrival we found cat ice in the margins. A very cold brisk easterly wind was forecasted lowering the temperature from just 2 degrees maximum to -3 in the wind. We opted not to go for the sensible potion with the wind behind and headed halfway up the beach side where the wind was right in our faces. Why? Well that’s where the fish seem to be this year. Two rods were cast out, one with a popped-up bait the other with a standard bottom bait and come an hour later we were wondering if things were going to happen, yet the alarm finally sounded and the first of eight runs developed of which five were converted. I cast out a heli-rig as a sleeper rod and two bites came to this. The first was an 8oz roach, the other a rare winter tench. After braving and beating the elements for nearly nine hours we finally called it a day and headed home with bigger fish on our minds for the following day. 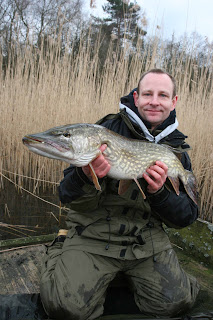 Friday was another early start and this time we headed to Frensham Great Pond knowing that we wouldn’t see as much action, however if any fish did pick up our baits then it would probably beat Marks best that stood a shade over 10lb. Once again the margins were covered in cat ice, yet the cold wind was from behind, so once the first couple of hours had past it felt some what more comfortable. Unfortunately runs were slow in coming and again we were beginning to think that the weather was just to raw, however the pop-up was finally picked up and a firm strike saw Mark bent into a solid fish. Unfortunately the fight was short lived as the hooks pulled leaving Mark gutted. Quite a time past without anymore action, then along the marginal reeds a fish was spotted and Mark quickly wound in a float fished sardine so that it was right on the spot and instantly the float slipped away. The fight was short and unspectacular, yet the pike weighed 12lb 9oz, a new personal best, recognise her? Once again a couple of hours past and the rod that was covering ground to our left was repositioned further out and to our right. I don’t think it was out long before a steady run saw Mark bent into a slow moving fish and knowing these venues could and on the odd occasion throw up the odd big fish thought that something special might be on the cards, yet it wasn’t to be as another low double slipped into the net. After another nine hours bankside and with the light and temperature dropping sharply we called it a day, happy with our results and with Mark full of confidence that he can now return on his own and catch a few.
As mentioned earlier, the weekend was spent at The Big One; something that I will cover in my next blog as I want to promote a new innovative gadget from Nash called the Deliverance Ball Maker.
Posted by Unknown at 05:22