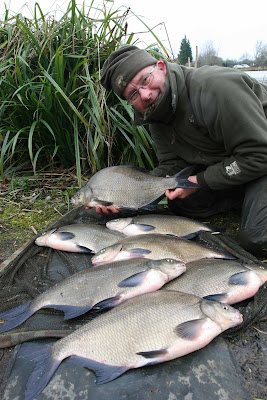 We all make mistakes!
Looking back at my diary exactly a year ago the daytime temperature reached 22 degrees, just 6 degrees overnight and a slight easterly blew. I was enjoying a session at Westhampnett and that evening I landed three good bream. As I look out the window today it’s all different, temperatures are struggling to get above freezing and snow covers the ground. Yesterday I had spent the day cleaning the tackle shed along with preparing my bream kit in the hope of my first overnight session of the year on Monday, the location Westhampnett, but will it happen, I have my doubts. If it doesn’t it will be a real shame as I was hoping to say farewell to a venue that has been so kind to me before commencing a sustained tench campaign. My ticket does allow me to fish the venue till the end of May, yet I wanted to put all my spare time into another venue; however it looks like I might just be also thinking of bream at the same time.
I think the most annoying thing that this terrible winter has bought is the endless hours spent organising tackle only to see the weather spoil the plan. Whether it be a guiding day or planed personal session I think I must have spent as much time getting my kit ready than actually on the bank. Sometimes I wish my life was more stereotyped, one species, one venue were the kit is always prepared it’s just a case of sorting bait and going. Unfortunately this isn’t the case, yet things should get easier over the next few months.
With cold heavy rain falling all day on Monday I did the sensible option and stayed at home compiling an article on preparing for a tench campaign. Due to the cold rain my planned roach day on Tuesday was put of till Wednesday and once again I got ahead of my self and wrote another article on targeting numerous species throughout one session.
Finally Wednesday arrived and although the weather was cold at least it was settled and I headed to a day ticket fishery in hope of roach. Arriving slightly later than hoped I found I had the lake to myself and settled in the same swim that had produced a two-pounder a couple of weeks ago. This time I had decided to try the float, yet come the end of the day just two net fish had fallen, a roach of 1lb 7oz and a trout, however the feeder had done the business, not in terms of numbers but quality as two roach had been netted, the best 2lb 6oz, the other 1lb 8oz. Unfortunately photographic evidence of the roach wasn’t possible as I found myself with a flat battery. As the heading says, we all make mistakes! 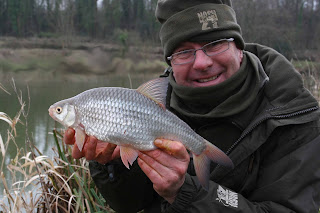 Knowing that the weather was once again going to change for the worse come the end of the week I almost decided to stay indoors yet after dropping the girlfriend of Thursday morning I stopped of at Badshot Lea Big Pond. This venue usually fishes really well in the spring for tench and bream, yet after two hours of non activity I was just about to move swim when the indicator danced then dropped to the ground. It was the start of a productive two hours in which nine good bream fell to the helicopter rig and groundbait feeder. Unfortunately the feeding spree was short lived and the shoal moved on yet 40lb of bream in five hours was far more than I had expected and proof that spring is just around the corner.
Having a delivery of bait and tackle from Nash I spent Friday cleaning tackle and preparing for the spring. I have to say that I can’t wait to get out and use my new Nash Entity rods, Siren alarms plus everything else needed to fish at the top of my game. My new sponsors Nash have listened to what I want to do over the next year and are backing me in every direction and I’m going to do everything in my power to pay them back, big time.
Its time to go and catch some big fish!
Posted by Unknown at 04:43