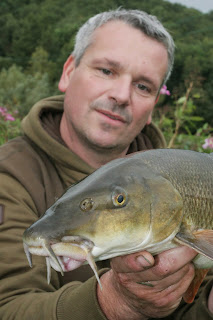 It’s the lady’s weekend off so not much fishing related jobs completed but plenty of Christmas shopping, joy!
Monday was spent, as most Mondays are, feature writing and one completed was a CAT Nash ‘Think-Tank’ where new recruit Jake Curry relates his thoughts after a strange session at Godalming’s Broadwater where PVA bags strangely won against The-Method. I also made time to clean up my email database as I’ve seemed to have neglected this of late. I also managed to secure some after dark Zander fishing at Old Bury Hill so if anyone is interested joining me then get in touch, this might be our last chance! With barbel firmly fixed in my brain I decided to do something that I rarely do, fish into darkness. This is more because the after dark crucian sessions have been knocked on the head so facing my fears once again I headed to the river which was high after the rain on Sunday night. One thing I have noticed with the Loddon this autumn is even when the river rises after rain it isn’t colouring up, why I just don’t know, but it certainly doesn’t fill me with confidence on arrival. Fortunately there was only one angler on the stretch which I knew so after a quick chat headed to the first of three barbel swims that I had in mind. An hour was spent in each, longer than what I normally give but with loads of debris coming down and having to repeatedly clear the line felt this was necessary, however come the end of the three hour session all that I had to show for my efforts was one missed chub bite. I was trying a new bait, so all wasn’t lost and although in the past I haven’t looked forward to such a session, strangely enjoyed it!
Tuesday morning I was back this time guiding an angler who was looking to up a couple of personal bests, chub and barbel. Knowing the river would still be up I took the decision to fish for barbel as this often produces the odd big chub and first look at the river I thought it was the right decision as although it had dropped from the previous night, it did seem to be more coloured. The first swim showed signs of fish, yet these were chub and clever ones at that. Without going into too much detail we fished nine swims throughout the day yet apart from the odd pull and a crayfish the fireworks we were looking for failed to arrive. Two other anglers I knew were also struggling and come the end of the day the colour had dropped right out of the river and the height was almost back to normal. I think this has to be the hardest day I have ever spent on the river, without a doubt down to the changing conditions, yet with a no bite return policy, Tony will be accompanying me once again very soon.
The following day I headed back to the river once it started to rain as for once I was hoping to get the river rising, yet the heavy rain forecasted turned out to be fine drizzle and the river was still falling. I tried nine swims in four hours, trying to find a hungry mouth yet apart from one chub rattle that I ignored returned home again fishless. Chris fished after dark that evening and managed a modest barbel for the stretch at 6lb 12oz.

With things getting personal I decided to fish into darkness the next day, what ‘s considered the best time for barbel, this time spending more time in known big fish areas, yet once again apart from an ignored chub rattle it wasn’t too be. Fortunately it seems every other angler that I speak to is faring the same so although its frustrating its just a sign of the time of year when the rivers are up, down, clear, coloured, fast, slow, carrying debris, you name it, basically just extremely difficult.

Friday was an early one, 4.45am in fact and with perch the target I met my customer in the early hours before heading south to a day ticket water. Although cold at just 5 degrees conditions looked perfect yet the perch had other things on their mind as everything we tried failed to produce the desired three-pound plus specimen. Tench and roach did take a liking to our prawn and lobworm offering, in fact the bobbins hardly stayed still for more than a few seconds, yet time after time, frustratingly thin air was struck. We even feed maggots and prawns under a tree only to have the swim boiling with good rudd and roach, yet the big perch we hoped that was attracted and lurking below just failed to show, yet if I had set out to catch silver fish then I reckon ten pound an hour would be easily achievable, but without distraction we stuck to our guns, twitching baits constantly in the hope of a big stripy, yet just two showed, one around 8oz the other around 1oz! The only heart stopping moment was when I tried Tony’s drop shotting rod only to hook a very big fish. Thoughts of a five pound perch flashed through my mind, yet after a few minutes the tail of a big carp surfaced and in the shallow water netting was almost impossible and finally the hook pulled. Even fishing two hours in torrential rain I would have thought the Fish-God’ would provide us with something to smile about on the way home yet it wasn’t to be.