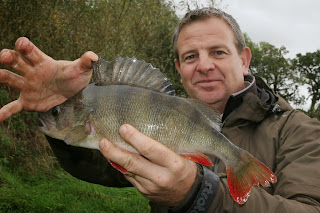 A session arranged with Andy Ford and Mick Brais from Sky Sports finally arrived and on a damp and windy morning we met on the banks of the river Loddon just as dawn was breaking.

Fortunately the saying ‘rain before seven, gone by eleven’ proved right and as the day progressed things became slightly more comfortable. We were hoping that a barbel may turn up, yet with one of the worst storms for five years forecasted to hit the country on Sunday night we found that the water level had been lowered some eighteen inches. Having exhausted the swims that gave us the best chance of a barbel it was obvious they weren’t in an obliging mood yet both anglers missed what were obviously chub bites on the pellet with Andy finally connecting with one that weighed around 4lb. Our next approach was to try for perch on the lobworms and soon Mick found a shoal taking maybe a dozen to 1lb 9oz. Somehow Andy managed to pinch Mick’s swim and take perch to 1lb 15oz before setting up a float and enjoyed some consistent sport on the maggot with roach, dace, minnows and perch to 2lb 6oz obliging. He even threw a lure around later in the day and caught a pike and a perch so it was an eventful, contrasting and enjoyable day for all.

Before the storm hit Sunday night I managed to get the tackle cleaned and dry then sorted everything out for a busy midweek period guiding before doing the usual Sunday afternoon visit to the parents.

With the weather forecasters edging on the side of caution with regards to the severity of the storm and the extent of damage I decided to do the sensible thing come Monday and stay inside writing up articles and getting the week’s paperwork sorted.

After dropping the lady of at work Tuesday I headed over to the parents as I was meeting young Jake for a day on the river. We were hoping to tempt a good barbel, maybe a modest chub, even a sizeable perch yet after trying a number of approaches for just one small perch and chub it was obvious that the fish weren’t happy with the sluice gates open and with the river neither coloured or clear we decided to grab the float gear, a pint of maggots and head to the river Wey in Farnham for a couple of hours trotting. The river here looked far better with a slight tinge of colour and after priming the swim with maggots whilst the rod was set up he made his first cast. As expected the float sailed away and a net dace dropped in the net, followed by another, yet a string of pesky minnows followed, a sign of just how mild it is as these usually disappear after a couple of frosts. After exhausting a pint of maggots over the next two hours we finally finished with a dozen good dace to 8oz plus four wild brown trout, yet it was probably one proper fish to ten minnows, frustrating or what.

Tapping the barometer at 5am Wednesday morning I was shocked to see that the pressure had risen from 990mb on Monday morning to 1020mb. Such a sudden increase was what I call ‘the kiss of death’ and if the river had been hard over the last few days then today was what was going to be classified as almost impossible. Coupled with this as I tried to clear the mist of the windscreen in the drive before heading off to meet a new customer it froze, joy! Meeting Lee at dawn I tried to cover up my thoughts on how the day would progress, yet Lee is an accomplished, experience angler and knew things wouldn’t be easy, yet we both agreed that all the time a line is in the water then there’s a chance so with optimism we crunched our way across frost covered fields. There was also another problem, we weren’t the first anglers on the stretch as another had beaten us to it and was settled in what I would classify as my banker swim for a bite, albeit normally from a chub. Undeterred we worked our way through a number of other potential swims yet apart from one very strange vibrating like bite, one that could be hit had eluded us. Grabbing a coffee and a sandwich in the car park we headed to another stretch and with two good swims on my mind we continued with optimism. Before progressing Lee had never fished a river before having spent many an hour carp fishing on the lakes around Chichester but was wanting to progress on to running water, so catching wasn’t the main objective of the day. What was more important was knowing how to read a swim and learn a couple of tactics that he could return with, yet anyone that knows me will agree catching is very important. Settling in the first swim I knew if Lee was to get a bite then it would be from a barbel, yet once again it didn’t happen so moving upstream we settled in a swim that hadn’t failed me for a bite all year and probably after ten minutes the tip tapped then slowly pulled round. To say I was relieved when the rod bent round is an understatement however the hooked fish caught us by surprise shooting upstream and becoming what can only be described as well and truly snagged. After maybe five minutes we both agreed that the fish was gone so all Lee could do was point the rod at the snag and walk back, yet amazingly something moved, however even more surprising was this wasn’t a barbel but a chub and not a monster at that, yet having never caught a chub at 3lb 15oz it was a personal best. A few more swims were tried before agreeing to call it a day at 4pm yet moments before reeling in the tip pulled a few inches forward before dropping back. It was certainly a liner but with the light fading and time pressing we had to throw in the towel, certainly not beaten, but certainly wanting a return trip to get the better of the river. Having fished the river hard from dawn to dusk for just one bite I felt it only fair to invite Lee back, to fish with me in November and with a date set we are looking forward to getting the better of the Loddon barbel. 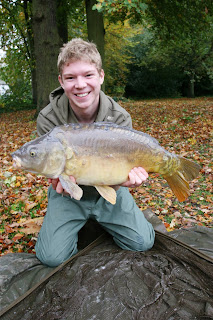 Thursday morning was another early one, 6am to be precise and after dropping the lady of at work I returned home to sort out the carp gear so that myself and Jake could head to Broadwater to shot a feature for CAT on whether or not PVA is needed. Without going into to much detail the session was a success but to say the script was written completely the opposite way to how I would have written it is how it went, a real question provoking few hours, yet with the article needed for a Nash Think Tank it will certainly get the old grey matter turning over.

Friday was my first chance of a lay-in, yet my old cat Georgina had other ideas and was as usual winging in my ear at 6am. Rising far earlier than I wanted I did at least get more paperwork completed than expected and knowing that my brother was fishing Broadwater with Rodger, a friend that we had grown up with as neighbours when we were really young, headed back to see how it was fishing. As soon as I pulled up I knew the carp were feeding as they were jumping all over the place and sure enough the mats were wet. A couple of other friends, Brian and Tony were also enjoying rod bending action and although I only stayed an hour and a half plenty of carp graced their nets. Kevin text me later to say that Rodger had taken nineteen carp to his seven, even Dad who popped down later managed to grab Kevin’s rod and drop a high teen in the net! I was hoping that knowing Broadwater had switched on; Enton would be doing the same, yet after arriving with fishing buddy Chris at dusk to target the crucians and fishing till 8.30pm without even a bleep decided that it was time to give these up till next year. 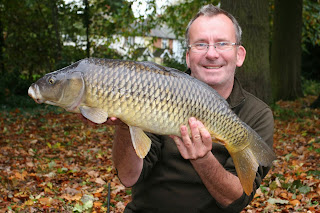 November has now been dedicated to barbel, let’s see what happens?