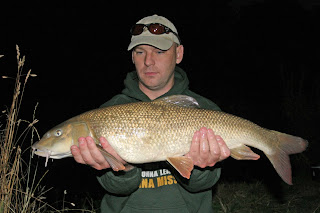 This week has seen a lack of time on the bank as I had three days booked of with the girlfriend. I did have a FAS barbel teach-in at Stanford End on Tuesday evening and apart from the initial disappointment of two no-shows we had a great evening. These teach-ins aren’t all about catching fish as for the first hour or so I go through how I approach the river, what I look for, the bait applied and tactics employed. This briefing is so that anglers can return and know that what they are doing and the swims they are fishing have a track record of producing.
Each angler picked a swim and settled down, yet the text requesting a photo failed to arrive early on. After spending time talking and helping the anglers the first fish was landed a chub of around 3lb, however this angler revealed that he had lost a big barbel earlier in the session. Two anglers had settled in one of the bigger swims as a big fish had rolled as darkness fell and soon after casting out Nige was into his first ever barbel which weighed 8lb 2oz. No further action came, yet all the anglers learnt lots and will be returning with plenty of confidence.
Wednesday we visited Thorpe Park and as I crossed the bridge into the theme park I looked out across the lakes and remember the time spent fishing these magical waters, however today was far from relaxing as I was going to experience a few white knuckle rides for the first time. OMG! 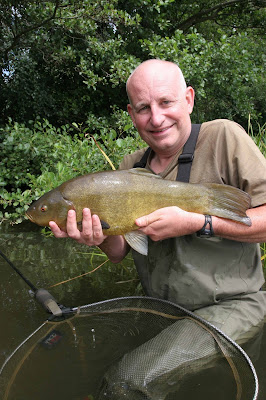 Thursday arrived and my weekly nine holes of golf with my mother at dawn were completed before settling down in the office to catch up on emails etc. The afternoon was spent getting a couple of lightweight carp rods ready for a few hours on the river Itchen as well as organising the kit for a days guiding on Frensham the following morning. I really should have cancelled the trip to the Itchen as it was gone midnight when my head hit the pillow and come 3.45am the alarm was ringing.
Meeting Steve next to the hotel we headed up the bridal path, an area I haven’t fished for a while and my second choice of swims as another angler had just beaten me to my preferred area. The first draw back was the rain that started as we set up and just seconds after casting out I knew that float fishing with maggot was going to be a non-starter as a tiny perch grabbed the bait. Loads more followed and after two hours we had to rethink tactics. A couple of tench had rolled over the groundbait so I decided to head home and grab a few small tutti fruity boilies. By the time I returned it was nearly 10am, the time that the tench normally go of the feed and after setting up scaled down bolt rigs and casting out we awaited a response. Casting every fifteen minutes the first bite finally came around midday and Steve slid the net under a new personal best tench weighing 6lb 2oz. This was followed by two more in quick succession and we were beginning to think we were onto a winner yet come 3pm and after a couple of hours of inactivity we decided to settle for the three. It was one of those days when the odds seem to be against us, yet constantly casting and tweaking things finally paid off and we left feeling very content as well as learning loads.
Next week I looking forward to a whole week of fishing with my mate Chris. The first couple of days have been planned to visit a new stretch of the river Thames with carp, chub and barbel our target as well as trying our luck on the Loddon for a barbel or two. Come Wednesday we will review are results and either head to a Stillwater for some action if things have been tough or continue on the rivers.