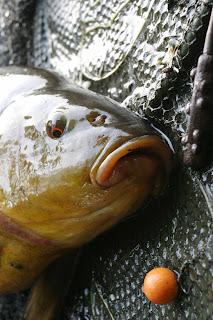 Having the tench lake closed I feel a bit at a loose end, roll on the opening of the rivers, for me it will be the Thames and I cant wait to get on my favourite Stillwater, Frensham.


The weekend jobs were completed which included cleaning out the bait freezer which was really forced on me as I always mix groundbait before a session and having to turn around on Friday evening needed the space to store a couple of bucketfuls that I put to good use next week.

Monday dawned and I tried to get out overnight yet it wasn’t to be as the morning was taken up with a dental appointment as well as covering the vegetable patch that I have been slowly digging with weed control sheeting. Come the afternoon I completed an Action Replay for Anglers Mail on the session that saw a few grass carp caught last week and whilst doing so felt the urge to visit my local animal feed supplier where I stocked up with a sack of maize, crushed maize and hemp. I even started soaking some for a session on Thursday. I also visited Yateley Angling Centre to buy a couple of birthday presents for my brothers 50th next week and whilst doing so had a good catch up with Ruth who I hadn’t seen for what seems ages. I also read Steve Collett’s views on the close season in last weeks Anglers Mail and I have to say everything he said is exactly how I feel on the situation. Unfortunately the youngsters of today don’t share the same views as us! So as you can see it was well into the afternoon before I managed to turn the computer off and put the camera down, to late to head of for a night under the stars for eels, however I did manage to grab the tench rods that were made up and head of to Johnsons feeling good that I was well ahaead of myself with work. I was glad to see that all the stars had long one, probably chasing a different species at their top weights as the crucians have now spawned. This is good as the lake has returned to being peaceful and un-crowded. I headed to the dam, peg 16 as this corner had the wind into it and once again it was raining. Casting out a pellet lead with a small tutti boilie on one rod and a piece of corn next to a groundbait feeder I was expecting this to score better but I was wrong it was the tutti as seven tench, the best 6lb 9oz, two crucians and surprisingly two double figured commons came in the next five hours.

Wednesday I started the boiling process of all the particles that I have been soaking for the grass carp session on Thursday along with sorting this kit and the tackle needed for an afternoon guiding session on Friday.

Thursday dawned and all looked well. The tackle was in the car and after dropping the girlfriend of I was to meet my dad for a spot of grass carp fishing. Unfortunately this didn’t happen as three miles from home the alternator packed up. Finally with dad and the AA help I managed to get the lady to work and get my car back home. Luckily dad lent me his car and after getting a few niggling things done arrived at the lake around 3pm. After spombing loads of particles out I sat back full of expectations, yet it wasn’t to be and at dusk I returned home without even a single bleep. I am now ninety percent sure what the problem is as last week I watched an angler take the lake apart using almost identical bait and rigs, however he was using a bait boat. It hurts me to say this but in this instance having one would have given me a massive advantage, yet am I going to get one, don’t be silly.

On Friday I spent an enjoyable few hours with one of my favourite customers Ron and we headed to Lodge Pond to try a few tactics including the helicopter rig and pellet lead that he had wanted to see. The maggot heli-rig soon proved to be useless due to the small roach so both rods were soon on the pellet lead with either pellet, squidgee or corn on the hook. The session proved far tougher than I had expected yet Ron still managed a best bream weighing exactly six pounds plus a couple of slightly smaller ones and a modest carp just as we called it a day. The weather was great, as was the conversation and as we left we joked as the lake had become busy with carp campers making the idyllic venue sounding more like a building site with the constant banging of mallets and bait boats being launched in all directions, don’t go there on a weekend!