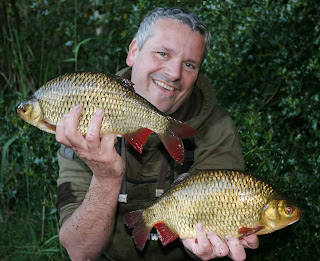 Unfortunately angling on the first night of the season, midnight on the 15th probably will rarely happen as it’s the girlfriend’s birthday on the 16th. Fortunately I talked her into taking her parents dog for a walk and where better than Frensham Great Pond. Amazingly it wasn’t rammed, with most anglers that had fished the first night leaving in the morning and reports were that it wasn’t fishing that good. 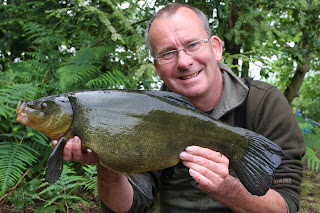 I was thinking of fishing the Thames for carp on Monday night yet with plenty of swims free and a good south west wind blowing plans changed and come 4pm I found myself looking across the lake from the main car park. I had thoughts of heading for the road bank yet the wind had swung and was now blowing from the north east, great. Knowing that Frensham hates a changing wind I headed for a swim where their was a good ripple, however I wasn’t that confident, yet as its done before on many occasions it decided to defy predictability and come 4.40pm I found myself landing a tench, one that weighed 7lb 9oz! From that moment the action was steady, yet the wind and undertow was just too strong to float fish for rudd from dusk and into darkness. An angler to the side of me was also catching and asked if I could take a picture of a personal best tench which weighed 8lb 14oz! Come 11pm, a further ten tench had come to the feeder tactics, many big sixes and one that resembled a football, yet knowing the morning is usually better, wound in and set the alarm for 4am. Fortunately the wind had eased making float fishing possible, yet things weren’t as easy as expected with just three tench and three perch falling but the feeder rod continued to produce fish, all tench and come 9pm my tally had risen to twenty-two, the best 8lb 1oz. 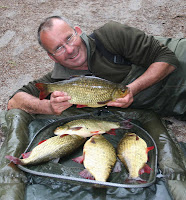 Back at home I needed some sleep so after sorting and cleaning the kit grabbed four hours before sorting the kit for a day out with my brother and his friends at Watmore Farm to celebrate his 50th on Wednesday. Oh how I would have loved to have been back at Frensham Tuesday evening, float fishing for rudd, as the wind had died, yet a wedding appointment in Newbury prevented this.
Wednesday dawned warm and meeting at Watmore Farm Fishery at 7am thoughts were on a day of arm aching action, yet it wasn’t to be as the fishing was somewhat disappointing, probably due to the variable wind. It was good to catch up with some good friends that I hadn’t seen for a while and the match was finally won by birthday boy and his angling partner Roger who’s two best carp weighed a total of around 14lb. I tried something different for a change, zig rigs, yet it was a frustrating day due to having around 18ft of water in front of me, yet a dozen or so small carp came to the tactic. I have to say I was well impressed with Nashbait’s Gyro Bug Mix that I spodded out and drove the carp crazy.

Come Thursday I was back at Frensham and fishing by 4pm, however once again the wind had swung and was now coming from the south west. As I was meeting my tenching partner Chris later that evening and with swims in close proximity in the North east corner decided to fish the same area as Monday with the view of moving for the following night if the fishing proved difficult. Difficult it was as I started float fishing at 8pm and my first bite came at 10.20pm. A flurry of bites produced five two pound rudd to 2lb 9oz plus a good perch and a tench before things died. The feeder rods went out yet stayed quiet and at 5.30am I was once again float fishing, however just two tench came my way. Chris had received a short feeding period from 11pm to 1am landing seven tench so he was happy as it was his first ever session on Frensham. 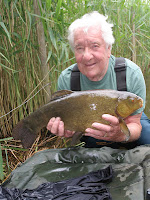 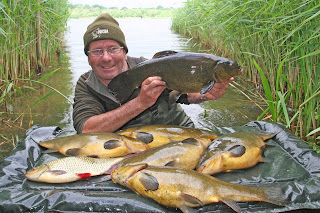 Friday morning I decided to head home, grab some food and return, yet this time I headed to the opposite bank, finally setting up in a swim I had never fished before. With the rods out by 1am I only had to wait around forty minutes before the first tench arrived. From then on it was steady until around 6pm when things quietened down. My dad popped down and even had an hour with my rods taking four good tench including a personal best weighing 7lb 5oz. Chris once again joined me, however the tench had slowed up by now and as dusk fell the rudd moved in with a number falling to both our rods, the best a personal best of 2lb 1oz to Chris. The dark hours were quiet but at 5am one of my rods ripped of and once again the action started with tench, rudd and perch picking up the maggot. Come 9am I had managed eighteen tench, the best 7lb 1oz, seven rudd to 2lb plus two perch to 2lb 4oz with Chris taking three tench to 7lb plus some good rudd.
Next week is going to be busy with four guiding days, three at Frensham and one roving the river Loddon in the hope of a big barbel.