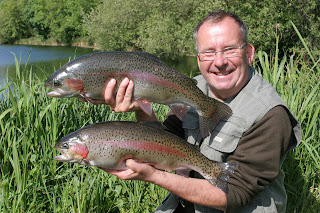 Casting a fly - Avington Trout Fishery.
An invitation to fish Avington Trout Fishery in Hampshire by one of my customers, Adrian Francis just couldn’t be ignored. I’m not sure what I had done to deserve such a generous offer but to be honest, the word customer won’t ever be used again, and instead it will be my ‘good friend’. To be honest I have only ever cast a fly on one occasion, many years ago on a small trout fishery just outside Horsham, so a return was well overdue. 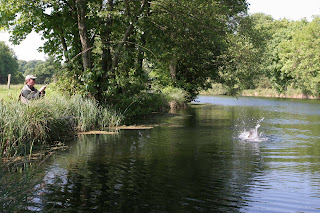 The day dawned warm and still and as we made our way down to the fishery through the gorgeous Hampshire countryside the air was filled with plenty of fishy tales. Arriving at the fishery just after opening time we were warmly welcomed by the fishery staff that just couldn’t have been more helpful. With tickets in hand and a few new flies in the box we leisurely walked around the first lake watching as big trout drifted in and out of the weed. The odd swirl wetted my appetite, yet today was so different to the rush for swims on club coarse waters, it was as if time stood still as we had all day and rushing and stressing just wasn’t part of the agenda. Crossing the Itchen carrier that runs through the fishery dark shapes could be spotted drifting in and out of the shadows, some were trout but others ‘The lady of the stream’ grayling. The second lake just shouted fish, rich in weed and crystal clear. Bow waves rippled across the surface, time to get the Polaroid’s on. It took a while for my eyes to adapt but there they were, huge trout that id only seen on videos before, yet now they were just yards before me. Adrian had been talking tactics during our stroll around the lakes and I apologise now if I was somehow distracted, I was listening. Settling between the two bottom lakes we made our rods up whilst Adrian gave me a short but educational delve into the world of Diptera (the study of flies). Words like Nymph, Buzzers and Shrimps were familiar yet Bobbies, Zonkers and Buggers bought on a whole new meaning to types of flies. Using a number six fly line, 9ft tapered leader I tied on an orange golden bullet as recommended by the guys in the shop and after a quick demonstration of casting proceeded to try and get a fly in the water. Slowly things came together and Adrian felt confident that I could be left alone to perfect my cast yet the trout weren’t playing ball as it wasn’t long before the line tightened and reel screamed as an angry rainbow made a bid for freedom. Thinking that I had just been lucky I continued to practice my cast yet a repeat performance happened and another six pound rainbow graced the net. Adrian was also soon into a fish of similar size before spotting one well into double figures, yet as is so often the case just as he felt the perfect cast would outwit such a monster and juvenile spoilt the party. With two fish each in such a short space of time we headed back to the clubhouse for a coffee.

The staff were grading fish in the stock pens and amazingly allowed us in to watch and take pictures. In some of the holding pools were some real monsters, rainbows and blue around twenty pounds and thoughts of hooking such a fish rekindled our imagination for the afternoon session. Back on lake two Adrian decided to try and single one big fish out and soon found himself in battle with a big rainbow yet it wasn’t to be as at the last minute it threw the hook. By now I was trying to cast to the big fish that had eluded Adrian in the morning but just as it had happened to him a smaller, fitter and faster rainbow screamed in from another direction. Adrian had also netted his three fish limit so once again we headed to the club house where the staff once again couldn’t have been more helpful, gutting and filleting our catch whilst we headed to the carrier stream for a bit of stealthy catch and release.

These fish are quite cute with numerous rises being missed and passed, yet as we looked back over ground covered they were once again taking the odd hatch of the surface. My attempts at side casting under trees came with the occasional branch hooked yet finally when I had let the fly drift pass me whilst looking at a good wild brownie l felt a tug on the line and finally lifted into a fish which turned out to be my first grayling on a fly. Adrian also gave me what looked to me like a master class in upstream, under cover side casting and soon had a small brownie in the net yet the big rainbow he tried to tempt had obviously seen it all before. With me putting yet another fly in a tree we decided to call it a day and what a day it was.

Without a doubt I will be back, however this time I will have perfected my casting in the garden as next time I want to stalk one of the big ones.
A massive thank you to Avington Trout Fishery for such a warm, friendly and helpful welcome, but even a bigger thank you to my good friend Adrian.