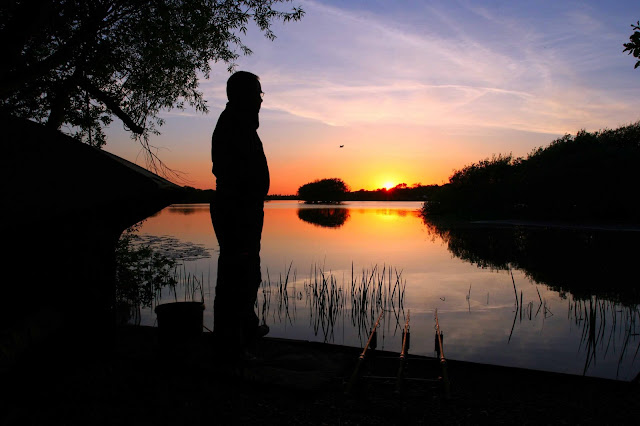 Once at home after my catfish session overnight on Friday I decided to spend the weekend pottering around the house tidying up, which included trying to organise my fishing tackle that had become somewhat messy.

Monday was all about getting the text completed for an Anglers Mail ‘Quick Comparison’ on 3lb T/C carp rods for under £100, which I managed to do before sorting out the tench kit and heading south once more. I wanting to fish a long day session on Tuesday but with the temperatures forecasted to reach twenty-four degrees and Atmospherics sky high on 1030mb I decided that the fish wouldn’t probably feed in this so decided on the overnighter which gave me the two best feeding times, dusk and dawn. Taking a risk I dropped into a swim favoured by carp anglers with the wind of my back and after introducing some ground bait thought I was on a winner as patches of bubbles soon appeared, yet it wasn’t to be a red-letter day as apart from one modest tench I endured a nightmare session, mainly due to roach picking up double 10mm boilies as well as three further tench evading capture, two to hook pulls the other from a line breakage.

Tuesday was spent in the studio taking photos of rod blanks for the Anglers Mail ‘Quick Comparison’. I have to admit that I have always struggled taking sharp close up images of small items, surprising being a photographer, but its probably why I never enjoyed portrait photography, as for me , I like taking pictures as they happen. Fortunately my good friend Mark at Farnham Photography was on the end of the line to give me some sound advice and come the end of the day I was happy with my results and had learnt loads, now where do you get such a service on the internet? With a few hours in the afternoon to play with I grabbed the winning rod and headed for a private estate lake I have access to. Finding a few carp tight against a snag I fished locked up with a breakaway lead, PVA bag of crushed Nash Monster Squid boiles along with one on the hair tipped of with a small buoyant piece of corn. Sitting on the rod it wasn’t long for the tip to pull round, lead eject and carp surface swinging away from the snag. At 17lb it was a great feature fish, yet four more double followed, not bad for two hours in bright sunshine. So what’s the winning rod? Well I think you will be surprised. Keep an eye out for the feature coming soon in Anglers Mail. Back at home I found a delivery on my doorstep and at last I have a new bedchair and sleeping bag, thank you Nash, comfort at last! In the evening I relaxed to a big glass of French red before sorting out my limited kit for a day’s trout fishing at Avington tomorrow (see separate blog).

After my fantastic day at Avington Trout Fishery on Wednesday it was back into work mode come Thursday morning and I found myself on the banks of Badshot Lea Big Pond with society’s treasurer Peter Hooper. The session was all about catching grass carp and although the weather was scorching he didn’t disappoint. Without giving too much away, we had the Anglers Mail ‘Action Replay’ completed in just three hours. If you want to know how to target these then keep an eye out over the coming weeks as it’s an eye opener. Back at home I was hoping to get plenty of things done, yet a quick check of my dad’s fish pond resulted in me having to turn the filters off and getting a hose pipe to it quickly as the water level had dropped dangerously low. If I had left my visit till the following morning he would have lost the lot!
Friday morning was once again taking close up product photos before my web designer Andy arrived to update my website. I managed to tie up a few new rigs for the tench lake, however it seems that we are now almost carp fishing for tench, however this feels better than tench fishing for roach which what we have been doing. Hopefully the new approach will work tonight?

Unfortunately its 8pm and I have just returned home after a trip to the tench lake only to find its closed for two weeks due to fish spawning, or should that read, carp spawning. The journey took me 2hrs 20mins and to say I’m not a bit hot under the collar is an understatement. Why close a lake for angling when carp are spawning, has the club forgotten about all the non carp anglers and do carp feed when they are shagging, no! Taking into consideration the lake isn’t an easy one, in fact the bailiff mentioned that he had only had one carp in over twenty nights, so if anglers cant catch them when they are on the munch, what chance have they of interfering with them when they are spawning, absolutely none! When fish spawn their minds are on other things, however they certainly needed anglers bait in the lead up to this rigorous period to build up reserves and energy to see them through this, just like tench do, however the decision made by carp anglers to protect carp has probably had a detrimental effect on the tench which are now leading up to spawning and in need of an easy meal. How narrow minded and selfish is the person that took this decision, especially when most carp anglers know it’s a waste of time fishing for carp whilst spawning is taking place. Will the lake be closed when the tench start to spawn in a couple of weeks, no, and was the lake closed when the bream were spawning, no, why because this would cause outrage from the carp anglers! What’s really pissed me off is we were just getting to know the venue and both me and Chris felt confident that sooner or later a big female would appear, something that’s not going to happen now. This is the best period for catching a big tench, just look in this weeks Anglers Mail, yet we have been stolen that chance. Would I have joined this club if I knew this would happen, no? Will we be joining next year, no!