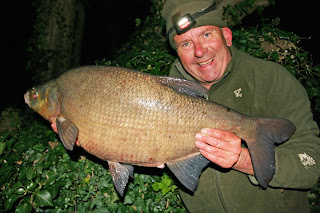 No fishing this weekend and with a bank holiday throwing my week into turmoil it looks like I might not get out fishing for myself till Thursday, however that doesn’t mean I wont be on the bank as a few guiding days are booked in.

The first was on Tuesday with my good friend Mel Smethurst. It’s been a while since we have been out, mainly due to the winter weather, yet it was time to get back on track and see if we could start knocking a few specimen fish of his list. Mel’s target is to try and catch as many species weighing 50% or more of the British record and with the silver bream on the feed at Mill Farm Fishery and his best a creditable 1lb 6oz it seemed the perfect starting point. With a cloudy day forecast we were rubbing our hands together yet when we arrived the forecasters had been premature in predicting its arrival as blue cloudless skies dominated the skies. Knowing that I had fished a tough two day session the week before I had doubts to what was going to happen, especially with the lakes motionless due to the lack of wind. Fortunately a few small silvers showed early on as well as the standard bombardment of carp and when the wind started to blow from the south hopes rose. At around 11am Mel connected with something fighting differently and when a big silver surfaced I reached out with the net and engulfed it. Weighing 2lb 8oz Mel was over the moon and with the pressure of we relaxed in the sunshine catching plenty more carp, tench and the odd quality roach, and among the small silvers that were also taken three more specimen silver graced Mel’s net, 2lb, 2lb 1oz and another monster of 2lb 10oz. What a day and with our next target, catfish on our minds, I don’t think it will be long before we join up again.

A few words from Mel…
‘Duncan, I can’t thank-you enough for a personal best that has been beaten all my personal bests.
Your guidance delivered a stunning result in far from perfect conditions.
I am still buzzing a day later as I write this.
We must get together again ASAP’

Wednesday morning was spent writing another article and compiling the images for Nash Peg One. They have got me working hard but I’m doing something I love and meeting the consultants on the bank and getting into their heads is great as it often gives me a totally different outlook on my fishing and in many cases creates edges otherwise ignored. Another really rewarding part of being a consultant for Nash and Nash Peg One is every month I receive a box of goodies containing all the new products have been developed. It’s a bit like Christmas coming early. By midday the file was on its way to Paul Garner who I’m looking forward to catching up with this Thursday. After lunch I was once again sorting kit and mixing bait for another guiding session, this time targeting crucians at Harris Lake on the Marsh Farm Complex.

Almost to the venue I realised I hadn’t packed the bedchair and sleeping bag, proof that we are all human, so after a return journey home I finally reached the venue at 5pm, only to find the far bank packed with anglers. With the rain commencing I made the decision to set up in peg 4, however just after getting sorted four anglers started to pack up so once my customer arrived at 6.30pm and after getting him placed in peg 32, I packed away the kit, headed back around the pond and set up again. I can only describe Harris Lake as the best tench runs water in the country, a crying shame to its former crucian glory and come the end of the night we must have taken more than forty between us, the best 5lb 15oz. The crucians were difficult to tempt, just because they don’t get time to find the bait and between us we took maybe a doze, the best exactly 2lb. With bream now finding there way into the lake the future doesn’t look good for the crucians and I can only see them being dramatically effected. Time will tell.

A few words from Neal…
‘Thanks once again for a thoroughly enjoyable session Duncan.
Another devastating method is added to my Angling weaponry.
Although in a hectic session the Tench far outweighed the Crucians it was a brilliant introduction to a killer method.
As always great teaching and company.
Roll on Enton’.
Neal. 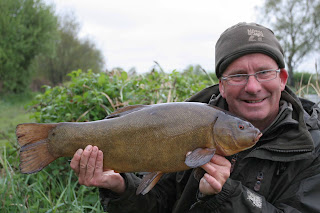 Thursday dawned cold and with a severe weather warning forecasted my trip to the south coast tench fishing was cancelled. The reason is that the location of the venue means it feels the full force of the wind and the makeup of the swims mean that its very difficult to secure storm poles so on edging on the side of sensibility we decided to rearrange our next visit to Monday. Paul Garner dropped in for a catch up before heading of to Marsh Farm for a crucian session, so with an evening spare I decided to meet up with him just before the full force of the gales hit. Unfortunately, or should I say fortunately, the swims where the crucians have been showing were all taken and as I passed Paul he was in need of a photograph as he had just landed a personal best crucian. Reports were that everyone was catching a few and with most over three-pound I was left to head of to another area of the lake. Tucked under an umbrella and at risk of doing a Mary Poppins I didn’t have to wait long for the baitrunner to whirl as a tench ploughed through the swim. Soon after returning this another bite came, this time from a crucian weighing 3lb 3oz. From then on it was just frantic and come 10pm, when due to not having a night ticket I packed away a further ten crucians had been obliging, nine over three pound with the best 3lb 13oz which came at the same time as a 3lb 5oz (Photos next week). In fact the weather was so bad, and with the camera getting wet every time a self take was taken, I even slipped a 3lb 7oz and 3lb 9oz crucian back without a photo. Three more tench also came, the best 7lb 14oz. What can I sat, what an incredible session. 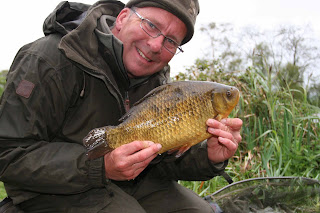 I was looking forward to a well earned lie in but the cat had other ideas and I was up earlier than wished. I needed to get my tackle ready for an overnight catfish session at Badshot Lea and once this was completed took my mother out for a game of golf. I could have blamed the wind for my game but although the ball went straight, starting it of ten degrees left is only going to lead to a few lost balls. Lucky my short game was better than the long game. Arriving at the lake around 6pm I was left with little choice of swim and decided to head to a quieter corner of the lake with my customer Steve. Unfortunately, just like the golf, the fishing and weather was well below par and apart from a few aborted runs on the worm’s just one 6lb tench found the net. It seems that the worm tactic isn’t working this season as the bream and tench have become active before the cats, so I have promised Steve a return later in the month where we will be edging our bets with a pellet approach.
Posted by Unknown at 12:11