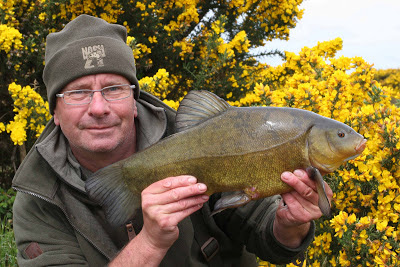 Farnham Angling Society held the first Nash junior carp and catfish teach-ins over the weekend and I managed to pop down on Sunday morning and have a chat with organiser and fellow Nash consultant Dave Benton who does a fantastic job, along with his helpers at making the weekend one to remember for six lucky anglers. Whilst I was there a number of carp were caught including a personal best common to a young lad called Jack and the night before a massive 44lb catfish was landed. Places are limited so if you are interested take a look at the fixture list within the FAS permit and get your name down as quickly as possible as places are limited. 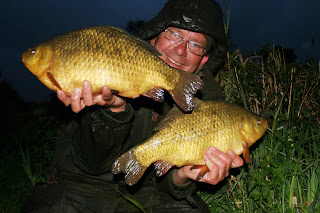 Monday morning dawned wet, yet by the time I met Alan at Court Farm Fishery the skies clouds had dispersed and we spent a few hours creating an Action Replay on catching carp in the margins. Keep an eye out in Anglers Mail as this approach is a devastating way of catching carp. By lunchtime he had caught a dozen or more carp and I headed home for lunch before heading south to the tench lake for an overnight session with angling companion Chris. The wind was howling across the lake so we tucked ourselves within a couple of sheltered swims on the south bank and prayed that the rain wouldn’t come which it didn’t. I decided to try a new approach and put a big bed of groundbait laced with particles just past a gravel bar and then drop two rods with Nash Monster Squid 10mm boilies on top as well as a corn stack, whilst Chris stayed on the spodded particle approach. Unfortunately Chris still is to get on the score sheet yet my tactic was an eye opener as four good tench came my way at regular intervals throughout the session plus a double figured bream. Amazingly the corn rod didn’t produce so as we were beginning to realise, this is, at the moment a boilie water.

I managed to get away from the tench lake before the rains arrived yet come the afternoon I had planned to meet up with my brother and dad at Godalmings Johnson’s Lake with crucians in mind. They had arrived at 10am, well before the rain, yet when I finally got to the lake at 4pm the heavens were well and truly open. Both had caught plenty of fish, Dad with a 22lb common on his crucian gear plus tench and one three pound crucian and Kevin with numerous tench along with six three pound crucians to 3lb 12oz; however things had now slowed down. Setting up next to them it only took me ten minutes to land my first crucian, one of 3lb 9oz yet unlike the skies the flood gates didn’t open. I did manage another three crucians, 2lb 15oz, 3lb 2oz and 3lb 7oz but with the wind increasing and the rain getting heavier come 9pm I threw the towel in and hurriedly made my way to the safety of the car.

Wednesday and Thursday is all about catching up and completing a couple of articles, getting up to date with emails and paperwork as well as getting everything dry before another attempt at the catfish come Thursday night.
Unfortunately the weather played a big part in the catfish session on Thursday evening as although a couple of good swims were secured the wind decided to swing from a south west to a north east overnight. It did take me by surprise and every angler was questioning why the lake was in such poor form, yet come the morning our questions had been answered. Fortunately I had already decided not to go all out on the worm approach and both myself and Mark fished one rod on this tactic along with the pellet lead and small boilie on the other and it was these rods that produced a few bream throughout the session with Mark taking a tench on the worms.