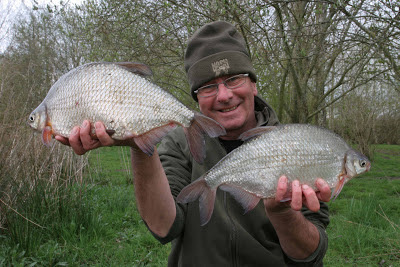 With the girlfriend on call and with the mornings free I was able to book in a couple of morning guiding sessions with one of my regulars, Ron Jackson. He wanted to try for perch on Saturday, yet knowing these have spawned and probably best left to the autumn we decided to fish perch tactics but had already accepted that we might just catch other species and that’s exactly what happened. Targeting a local day ticket water, one that holds big perch, we used simple pole float tactics with prawn as bait dropped in the margins. First three casts produced small perch, yet the forth took Ron by surprise as a powerful common ripped line of the spool with a split second of striking. The weather was raw, ranging between 4 and 5.5degrees with a chilling north east wind, yet three more carp followed to 11lb plus a tench in the five hour session.

The following morning we met at a frost covered Marsh Farm with tench on our minds. Harris Lake was our destination, however I had told Ron that the session maybe tough as the cold start and bright blue skies might just kill sport. Using the groundbait lead with corn on the hook we were pleasantly surprised as after just ten minutes the alarm sounded and a crucian weighing just over 2lb dropped in the net. The sport was then steady up till the time we left with Ron taking eleven fish in total, five tench and six crucians the best a new personal best of 2lb 4oz.
I spent the day writing the words for a Nash article on Monday, yet come 4pm I was once again heading south for an overnight tench session. The bait has been rethought slightly, with the dead maggots being replaced with more pellets as we need to get fish in our swim, whether they are tench, bream or carp. Once feeding we can then amend the feed to give us a better chance of singling the tench out. Setting up in a new swim and casting 70 yards to a deep gulley I had to wait to the early hours for the first bite but unfortunately this came from a tufted duck. Fortunately at 4am the same rod rips of and after a nerve wracking fight a 20lb 4oz mirror slides over the drawstring. Another bite at 7am which had tench written all over it was aborted but at least the ploy looks like its working.
Back at home I had to do a sequence of images and subtitles to complete the Nash article before organising the kit again for another overnight session, this time for bream, little did I know what was about to happen. 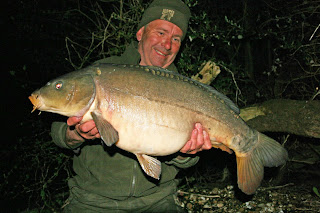 Arriving at the lake at around 5pm I found my first choice swim taken, yet after checking the weather noticed that the wind was going to swing from a southerly to an easterly, so took a risk and set up in the hope this would materialise. If it did then it would be blowing straight into my face. Setting about baiting up I deposited thirty balls of groundbait out per rod, before leaving this an hour and then casting all three rods over the top. As forecasted the lake went dead calm at 7pm before the wind started pushing into my face and I rubbed my hands together as the plan seemed to be coming together. At 8.30pm the right hand rod produces a bite and as I draw the bream over the drawstring I can see it’s a double and at exactly 12lb it’s a great start, yet an hour later the middle rod produces a bite and I can feel from the sheer weight that it’s bigger. As I watch the bream in the beam of my head torch in the deep clear margins I initially think she’s around the same size, yet when she goes in the net my jaw hits the floor as it’s far bigger. I know its close if not bigger than my best and as the dial spins on the scales it finally settles at 16lb 1oz, a dream fish if ever their was. Things then just get better as another bream of 13lb 3oz comes at 10.30 before the swim dies. At 1am and 4am I recast the rods and refresh the method balls and just as the dawn sun warms me from another freezing night another bite comes, this time from another lump weighing 13lb 5oz. Just as she goes in the net one of the other rods signals a bite and I’m thinking of a big brace shot, yet unfortunately the hook pulls. (photos next week!) 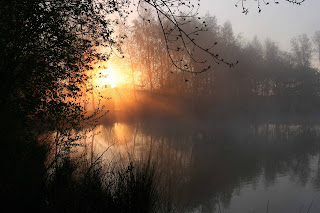 Wednesdays a bit of a blur, as although on a high I find myself rushing about getting the silver bream kit ready for a two day attempt at breaking the British record yet the session turns into a real gruller as the wind swings to the north, Thursday and Friday mornings dawn with a hard ground frost, high pressure brings cloudless skies and the fish switch of. Fishing hard all day Thursday, some nine hours all I have for my efforts are four small silvers, a few roach and a dozen carp which might sound good but at Mill Farm Fishery, a couple of dozen is considered an average day. Fridays slightly better with a dozen silvers, but they are again all small and another dozen or more carp and come early afternoon I decide to throw the towel in. As they say, if their not feeding, then you can’t catch them.
After three nights on an uncomfortable bed chair and through cold nights I’m glad and looking forward to spending the next five nights at home in a comfortable warm bed.