A week in paradise - Weekly report starting Sat 18th May 2013 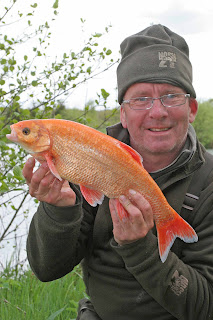 This week was spent down in Devon at Anglers Paradise with my girlfriend, her parents as well as my parents. This was a Christmas present to them and although I knew before leaving that it wasn’t going to be my cup of tea, I hoped that both fathers would enjoy themselves.

Arriving in bright sunshine and wind of no description we hoped that the weather would continue in the same form, however we were wrong. Fortunately the rains stayed away, yet it was the chilly gusty strong north winds that we had to endure all week that dampened our spirits.
Before mentioning the fishing I have to mention the accommodation. We stayed in ‘Anglers Retreat’ and I have to say this was immaculate with everything needed to make the stay as comfortable as possible. A warm welcome on arrival and a few glasses of Zyg’s wine certainly warmed our tummies and after a quick walk around the complex we were all preparing the tackle for a start in the morning.
Heading for the float only lake we all sat in a line and caught numerous different species from golden tench to kio, yet it was a couple of big golden orfe that continuously swam in front of us that I wanted to see closer. Unfortunately it wasn’t to be as after stalking these for a while, one finally got annoyed sucked in my corn offering, only to see me strike thin air. 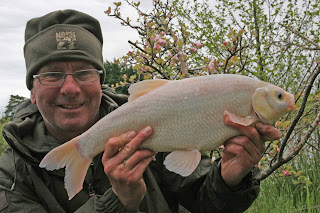 The following day I headed to ‘The Specimen Orfe and Golden Tench Lake’ as this was where I was going to concentrate my efforts for the week, yet I only fished the lake for a few hours as on arrival at 5am a couple of inconsiderate anglers had decided to leave their tackle in a couple of the best swims, something I didn’t take kindly too. When they did arrive in went around thirty balls of groundbait and I knew from that moment the lake was going to shut up shop and it did. Taking into consideration the quantity of fish in this lake, theirs only one to tackle this and that’s on a softly, softly basis so I decided to call it a day after just a couple of hours and leave till later in the week. Reports were that the lakes were all fishing hard, almost certainly due to the changeable weather that had now slowly started to get worse. Their was also another problem as the Tench Lake that the fathers had been looking forward to fish was closed due to an algae problem that I suspect had filtered into the other lakes and made the fish feel a little ill, especially the golden tench that had almost disappeared. 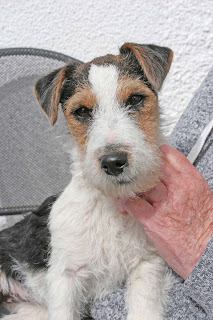 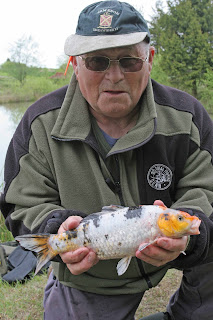 The dad’s had now decided to fish ‘The Beginners Carp Lake’ as this provided non-stop action from carp up to 12lb along with orfe and rudd. I spent a few hours during the week on ‘The East Access Lake’ and could have caught double figured carp all day but this was very popular with others who seemed to think it acceptable to leave brollies and bivies in swims overnight and all day, even when they weren’t their!

One day we headed to Anglers Elderado to fish ‘The Orfe and Tench Lake’, yet once again the tench weren’t playing ball and we all fished hard for a few hours for just the occasional small orfe. A day to Bude to keep the ladies happy midweek broke up the fishing as well as giving the Specimen Orfe Lake a rest. I had been keeping a close eye on this small intermit lake every day and had started to think that what is supposed to be in their wasn’t as the same orfe were spotted along with a grass carp and a lone black and red kio around 9lb. Undeterred I booked the lake for Thursday only to find once again I wasn’t alone, yet instead of trying to stalk the fish on the float, which would have been impossible due to the high wind, I decided to drop a small feeder as close to the island, almost in between the weed. This seemed to work as on the first day I managed eight bites, all apart from one was converted into orfe, the best a blue orfe of 4lb 4oz along with a golden of 2lb 12oz. The same tactics were employed the following day and again seven fish from nine bites were converted. Six were orfe but again the best maybe 2lb 8oz along with the grass carp that I had spotted earlier in the week. I must admit when I turned my back on the lake late that afternoon my thoughts were that I had been chasing ghosts all week. 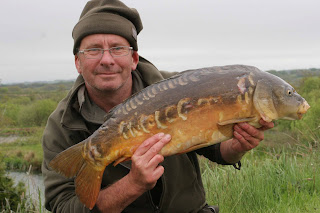 All in all we had an enjoyable, relaxing week enjoying some home cooked food from the onsite chef as well as a few drinks in the bar. The Jack Russels kept the girls happy whilst we fished and the peacefulness of the venue has to be experienced as the air is just filled with bird song.
My final thoughts of Anglers Paradise are mixed though. The location, accommodation and friendliness of venue is second to none, and its this, and this alone that would see me returning in the future, yet don’t believe everything about the fishing that’s written in the brochure.
Posted by Unknown at 02:42