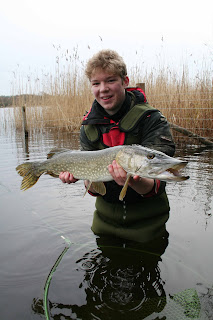 What with New Years Eve and Day, fishing this week has been limited to the back end of the week. Unfortunately, although the weather looked and felt fine, even good enough for a red letter day, one factor was working against the angler and that has been atmospheric pressure. I remember a spell a couple of months ago that was similar, mild and dry with cloud cover and a westerly, yet with atmospherics hovering around 1035mb the fishing was terrible, and this week has been similar.
Wednesday wasn’t too bad as the atmospherics were still rising. I was out guiding with young Jake, who wanted some practice catching and handling pike, so we headed to Frensham Small Pond a usually productive lake holding plenty of jacks. Arriving at around 8am we headed straight to the dam wall as nine-times-out-of-ten this is where the pike have shoaled the roach up, yet after an hour and a half we knew we were in the wrong place as pike could be seen chasing fry half way up the lake. Jake asked me what I would do in such a situation and I said move to the fish, so that’s exactly what we did and within ten minutes of casting out Jake was posing with a nice pike. The action was steady with a further six pike being netted along with around the same either missed or lost from hook pulls. It was a great day out where Jake leant loads including how to mount baits, make traces, the importance of a recast as well as handing pike out of the water and unhooking.
Thursday I had planned a whole day perch fishing with my brother on a new water, yet a feature for Anglers Mail had me working overtime. The day was rescheduled and the venue changed to our more local Gold Valley Lakes where l finally caught up with him early afternoon. He was happily catching quality roach and perch on the float in the main lake and I roved around trying to find a few larger specimens on Bungalow, yet my efforts went unnoticed. It was when I went to write up my daily session report that l noticed how high the pressure was and instantly knew why the fishing wasn’t as good as I had expected. 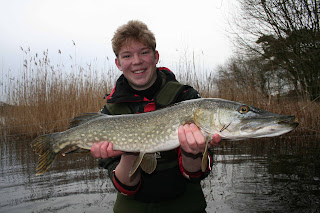 I should have gone chub fishing the following day, as these don’t seem to be as affected as other species are with pressure levels but instead headed to Old Bury Hill with zander on my mind. Arriving mid afternoon it soon became apparent that the fishing was slow, yet a carp and two bream to the carp anglers proved fish were feeding and with small fish dimpling the surface at dusk my hopes were high. Come 7.30pm all confidence had gone and with four other zander anglers catching just one zed between them we all packed up together blaming the atmospherics for the lack of action. 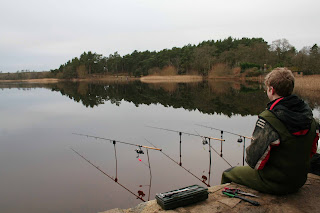 Top tip and lessons leant this week.
I leant the importance of moving to showing fish many years ago but it was a great lesson for young Jake to witness this first hand. If we had stayed in our initial swims we may well have gone home on a blank. If you look at the image of Jake sitting on the dam rod next to our rods and look up the lake you can see where two pike have just struck!
Top tip for the week is to arrive as early as possible and watch the water as fish often give their location away at this time of the day. I even moved from my normal tried and tested swims at Old Bury Hill on Friday evening to an area that’s not often fished as l thought that the pressure might not effect shallow water as it did deep, yet this made no difference at all, however at least I headed home knowing l had made the effort.
Posted by Unknown at 02:13