The Famine before the feast. 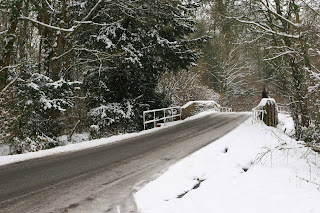 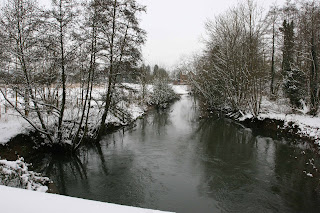 Being the girlfriend’s weekend off and having to dog-sit till Monday morning, fishing activities were minimal with just an introduction of bait spodded into the venue I’m pre-baiting on Sunday.
Monday was spent completing part 3 of my mini series the 'Pellet/Groundbait Lead' for Coarse Angling Today whilst watching the snow and temperatures fall.
Tuesday I headed to the river for a spot of chub fishing, yet with all my experience I should have known it was going to be in a terrible state, running high, coloured and cold. I tried two banker swims without any joy, so returned home, took a few images for a feature before heading back to the pre-baited lake, this time with my tackle. The temperature was just 2.5degrees on arrival and even before darkness descended ice was forming on my tackle. I have to say I wasn’t full of confidence, why? Well a few years ago I remember spodding some bait out and noticed that on retrieval loads of bubbles were left on the surface that took ages to disappear. That night I caught absolutely nothing and it was during a very prolific period. Well after spodding around fifteen loads out, the swim was once again full of bubbles and come 7pm just one bleep had come. If I had gone with my instincts then I wouldn’t have fished the river or lake, yet I always work on the theory that if you have a bait in the water then you 're in with a chance. 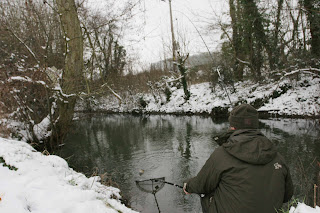 As much as I wanted to get out on Wednesday I didn’t due to a meeting with my accountant, the weather was also taking a drastic turn for the worse. Tight Lines called to see if I was free to create a short film for the show, yet due to the following two days booked for guiding I had to recline the offer. Hopefully in the next couple of weeks I will be out with them though trying to catch a species I have never caught before. In the end it was a day catching up and doing jobs such as backing up images, clearing the email and computer database, as well as beginning to think of promoting guiding trips for later in the year. The day flew past and a quick look at the lakes on route to collect the girlfriend found them to be frozen. When I returned home I had to cancel not only Thursday and Fridays guiding but also a days perch fishing on Monday. Rarely have I ever known the weather to be so bad as normally if its cold and the lakes are frozen then the rivers are bang on chub form, but with the ground saturated, any rain or snow just sees them rising rapidly and colouring up with cold water, a killer. I have to admit it, apart from a spot of dace or roach fishing on small rivers close by, and that wont even be very good, I feel for once almost lost for options.
Wednesday night the temperature dropped to a chilling -6 and although I thought about heading for the Loddon with bread on Thursday morning, I knew it would be a waste of time so I stayed at home, turned the heating up and compiled a couple of articles for European magazines. Having had to cancel three days guiding and missing out on a Tight Lines feature I know money will be tight come the end of the month so sometimes you just have to look elsewhere to get the pennies coming in. To be honest come the evening I felt that I had managed to really get on top of things, so when the weather turns for the better I can get out and make the most of it.
The snow started to fall Friday morning so it was another day in the office, yet the tackle is by the front door as if the roads allow I’m off to the river for a spot of chub fishing Saturday morning. Leaving home at 8.30am I nearly didn’t make it to the river as the road leading to it was a sheet of ice, yet crawling at snail speed I eventually made the car park. Being the first to tread the snow covered fields I knew the chub would be feeding, yet it wasn’t as easy as expected, probably due to the Goosesander .hunting the river. Two bites were forthcoming yet although welcome they weren’t the monsters I hoped for. With no let up in the weather, the next few weeks aren’t going to be easy. 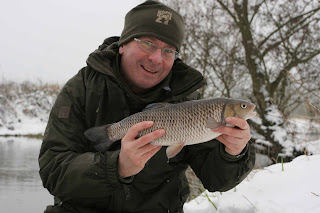 Top Tip and lessons learnt.
Don’t ever think it’s too cold to catch. As long as the river is running clear then chub will feed. Bread is the best bait in such conditions. The set-up I use is simple, just a tiny 10gram cage feeder running on 6lb line. This is buffeted by two small float stops, which allow the length of hooklink to be altered, and a barbless size 6 hook completes the rig. Bites are usually soon after casting so hold the rod.
The lesson learnt this week is not to rush to the river if we have had any rain or snow melt. In previous winters when the ground hasn’t been saturated a day of light rain hasn’t made to much difference yet this year and rain goes straight into the river, raising the level, speeding and colouring it up and reducing the temperature.
Posted by Unknown at 05:11