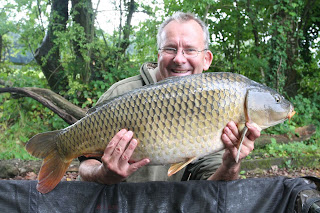 Having mastered the art of zig fishing there was one last trick up my sleeve that I needed to become competent using, one that I had watched another angler employ on the same lake I was doing so well with sub-surface zigs and this was over-depth zigs, a tactic that was literally taking the place apart.

It was high summer and with many of the lakes resident carp spending most of their daytime activities close to the surface it seemed logical that they could be tempted off the top, yet the amount of birds, especially sea gulls had put most people off. Any freebies placed on the surface were soon intercepted by these along with the resident swans, coots, mallards, tuffties and moorhens yet this one angler had overcome the problem and was simply reaping the rewards. One of the best tactics in angling is not to be afraid to approach an angler who is catching and ask for some advice. This is what I did and fortunately the angler was happy to help, especially once he knew that I had been catching on zigs below the surface. He was down for a 48hr session and said if he didn’t catch thirty carp during his stay he would be disappointed. Now this is on a lake where half a dozen in this time would have been classified as a red-letter session! During the few minutes we spoke he managed two carp, including a twenty and what I learnt then was that if you want to catch on over-depth zigs then the most important point is to feed the birds off at the start. Now I have heard of anglers doing this before but never witnessed just how much bait is needed but this angler had two 15kg sacks of floating dog biscuits at his disposal for the session and was spombing two large pouchfuls out every ten minutes or so just to feed the last remaining birds as well as the carp that were also feeding. 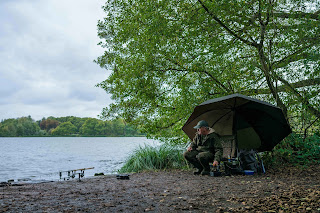 Feeding tactics
Before progressing it’s amazing how birds can tell the difference between a bait with a hook in it and a freebie, luckily carp aren’t as clever so once the birds have had their fill its rare for one to make a mistake, in fact the birds usually move well away, fully contented leaving the carp to feed in peace.  At the start of a session I would have no problem continuously spombing dog biscuits out to feed the birds and on average on this lake it took around three kilos to fill them up! All the time the birds are feeding the carp will be curious to the activity, move in and join in. Don’t be in a hurry to cast in, what you need to achieve is a few carp competing, so be patient. 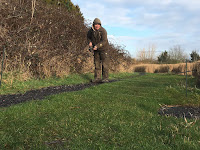 Its best to target carp on over-depth zigs on days of little or no wind for obvious reasons, yet if the wind does increase then simply by oiling up the freebies will create a flat spot on the surface and keep the bait within your swim or longer without the fear of it and the carp being dragged too far out. I have found that having a slight breeze of my back is great as I can clip the spomb rod up at say forty yards and then place my rods at fifty. This allows the carp to have an area where they can feed confidently and as they follow the bait further out finally come across my hookbaits. Having already had plenty of freebies they have no reason to suspect anything and simply suck in my carefully positioned baits and the rest they say is history. It’s a tactic that has served me well and one that I always try to employ. The great thing about using over-depth zigs is it allows me to use two rods as opposed to chasing fish around with a controller float and the active feeding that’s needed to get the best out of this method really suits my fishing. Remember I come from a match background so sitting behind salient alarms for
long periods is just not in my nature. 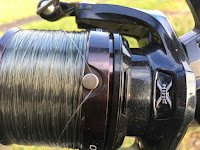 Creating a feeding zone and watching carp slurp down freebies whilst getting ever closer to your hookbaits is exciting stuff and then to see a massive swirl on the surface followed a couple of seconds later by the alarm screaming is just fishing at its best.

Not only is this style of fishing hugely productive it’s also cheap as opposed to boilie fishing as if  bought from the right outlet a 15kg sack of dog biscuits cost around the same as a kilo of boilies. Alternatively I buy my dog biscuits from a local supermarket and a few kilo of value brand ones cost next to
nothing. Although these dog biscuits are naturally oily I like to
boost mine with Nash Gyro Juice.

Instead of fishing long daytime sessions I found that by arriving mid morning and fishing through to mid afternoon best. Most overnight carp anglers have left which allows me to enjoy my style of fishing without attracting too much attention. Something else I have found is that sub-surface zigs seem to work best early in the morning or late in the afternoon so this method can be used to great effect during the usually unproductive midday period. If I were a carp angler and fishing a lake over a 24 hour period that responds to zigs, whether they be over-depth or subsurface then this is how my session would pan out. Say I arrived late afternoon I would start on subsurface zigs over a cloud groundbait. As darkness fell bottom baits would be fished in the same spot as the zigs were. At first light, or soon after I would be back on subsurface zigs before feeding surface baits from around 10am onwards and using over-depth zigs until I leave. It all seems like loads of hard work but if you want to catch more than others then you just have to keep changing. 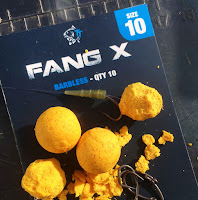 Although in the early days I used a drilled out dog biscuit on the hair I soon moved on to a pop-up boilie, similar in colour to the dog biscuits and whittled down to the same shape. These stay on and can be cast out and left as opposed to the dog biscuits that had a tendency to come of easily.

Tackle
I use the same rods, reels, mainline and lead set-up as used for subsurface zigs but hook length is adjusted so that it’s a good foot longer than the depth of the swim. A couple of areas that I did noticed made a difference is not to fish the hook length at dead depth. The reason I call this tactic over-depth is I want some of the hook length to be laying across the surface and not tight to the lead. Hook shape and weight has also made a huge difference and I prefer to use a smallish hook, around a size 10, not to heavy in the gauge such as a Fang Twister and find that better hookholds are achieved by placing a hook Kicker on the eye of the hook. 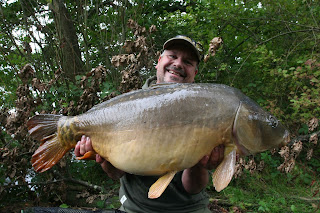 This tactic isn’t for the lazy angler but one that’s proactive and it’s these work ethics alone that make this tactic one that’s rarely used. Next time you find the carp up on the surface, make sure you have plenty of floating dog biscuits with you and start spombing them out. Don’t cast out to quickly, just feed the birds off to start with, watch for those lips and then cast when they are confident. Once mastered casting a bottom bait out during daylight will be a thing of the past.
Duncan Charman is sponsored by Nash Tackle and Bait and has his own website www.duncancharman.co.uk  He regularly contributes to top weekly, Anglers Mail magazine and is their very own ‘Where to fish’ expert for the South East.
He is also an angling guide and can be booked on a daily basis for most species including carp, pike, perch, zander, chub, catfish, barbel, bream, grass carp, crucians, roach, rudd, grayling, tench even golden orfe. Guiding vouchers are also available which make great birthday and Christmas presents for the angler with everything. For more information and prices email him at duncancharman@me.com or give him a call 07928 617006 / 01252 315271.
He’s also written a book called Evolution of an Angler which can be obtained at the stupid price of just £10.99 plus P&P. Again email him for more details. 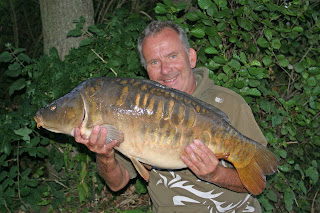 1 – Watching big carp like this common slurping down baits off the surface is for me as good as it gets.
2 – A big swirl is often followed a few seconds later by a screaming take.
3 – First thing to do is feed the birds off.
4 – The best way to get all the rods fishing at the same distance is to use marker sticks.
5 – Use the reels line clip to cast to the same spot every time.
6 – Make a reference on your main line so after a fish is caught you can cast back into position.
7 – Cheap dog biscuits are great for feeding the birds off.
8 – A whittled down pop-up boilie fished over-depth, slightly further out than your feed is a brilliant tactic.
9 – ‘The Big Dink’ caught at 32lb on an over-depth zig my mate Chris Petter.
10 – This was my first carp taken on a zig, what a stunner!