The master of the pin! 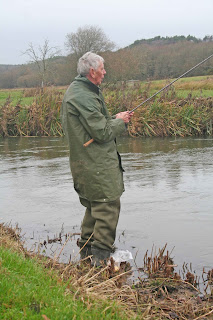 This weekend saw me and Lewis heading to the river Frome. Lewis has never fished the river before so although this was a guiding day it was more of an introduction to the river than a learning one as this man can certainly fish the centrepin. 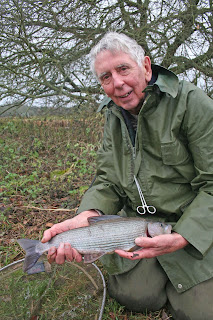 The weather was terrible there and back with drizzle and fog making the 160mile trip not that enjoyable but fortunately a predicted break in the weather during our stay made up for this. Arriving shortly after 8am Lewis soon had his first Frome grayling, one around 4oz, let’s hope things improve. That first swim, one that certainly contains two-pounders only produced small grayling up to around a pound so with lots of other swims to try we headed further downstream. The second swim we tried is a lovely long trot, a stick float anglers dream yet although a few fish did come including grayling to almost 2lb they were certainly not there in the usual numbers. The river was carrying some colour and corn certainly seemed to score better than maggots and if there is one thing that I’m beginning to learn about the Frome is that these fish move around unlike the predictability of the Itchen and Test where they seem to remain in one spot. Third swim, one that usually produces just the odd bite saw Lewis take a number of fish including one over two-pounds and a number approaching this. Just a shame that the biggest one hooked came off! After a few more swims and fish we headed back to the car for lunch before heading upstream to a long sweeping bend that has a few big fish in. The wind had now grown in force and even to an experienced float angler presentation was proving difficult so we reluctantly switched to the feeder which resulted in more than a dozen fish including sea and brown trout plus grayling to 2lb. 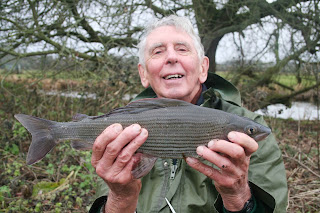 Just as predicted soon after we retreated to the car mid afternoon the heavens opened. This river rises and falls very quickly after rain which is why these fish get moved around and predicting where they are can be difficult yet this adds to the fun as you never know what’s going to turn up next.

If you fancy a day’s fishing on the Frome, Itchen, Blackwater or Test trotting a float for a variety of species then why not treat yourself to a day out with me. Just email me – duncancharman@me.com for further details.
Posted by Unknown at 06:43