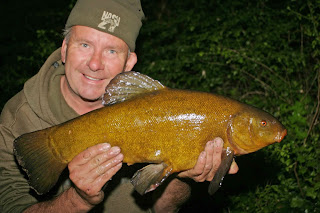 Two days in Kent.
Its not often I manage to get away and fish a proper session but an invite from fellow Nash man Ted Bryan to try and beat my tench personal best of 10lb 3oz just couldn’t be ignored. Teaming up with my fishing mate Chris Petter we loaded the van and headed east expecting the trip to take around two-hours but amazingly just an hour later we were passing the gates to the Larkfield Complex, one of Ted’s favourite venues. I had asked Ted if he needed anything bringing down before leaving and he requested ‘a bit of crumpet’ so a quick shop at Tesco for their finest crumpets saw half of one carefully gift wrapped, something I know will come back and bite me on the bum one day.
Now before progressing the News stated that there was a slight earthquake in Kent over our stay but for the records this was Ted stumbling on a branch and ending up in the undergrowth moments after our arrival. After dragging him out whilst laughing loud we finally got to look around the lake and choose our swims. Ted fished to my left in what initially started out as an easy-access swim however once camp was set and rods out he spread so many rat traps around that it became more of an obstacle course. I set up in a tight swim with steps in front and Chris to my right in one with a couple of islands either side. 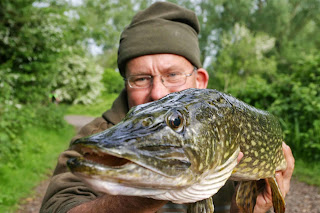 Ted had given us the low down on his baiting and tactics and looking at his past captures who was I to deviate away from these so a dozen or balls of groundbait laced with a few particles was deposited around thirty yards out before a couple of small yellow pop-ups descended on top. It was now time to wait and let the fish arrive, however come the following morning, and after periodically topping the swim up by spodding groundbait out, some twelve hours later, neither myself or Chris had had a bite with Ted taking one tench of 7lb 8oz in the early hours. After breakfast I decided to experiment with maggot even though Ted had said the eels would be a pain but nothing happened until late morning when a number of big drop-backs and bare hooks resulted in me scratching my head. I did finally make contact but after a second or so the hook pulled making the identity of the culprit impossible. Moments later a screamer resulted in my mono hooklink parting and initial thoughts were that this would be a bite off, but careful inspection showed it had broken on the knotless-knot, ouch! During this period Chris had his first bite and quickly dropped a good male tench in the net that looked close to his 7lb 4oz personal best but it was a few ounces shy at 6lb 15oz. The afternoon flew past and come the early evening it was time to take a risk and with just one night left I decided to give my swim the big one, depositing around thirty balls of groundbait within. I had stuck with the maggot on one rod and was surprised that since the flurry of action earlier in the day that come midnight they had remained untouched yet after a recast another spell of drop-backs got my brain going again as could I make contact, no. Whilst this frustrating action continued I received two runs on the pop-up taking tench of 6lb 8oz and 7lb 2oz, babies for this venue and come 2.30am and still getting drop-backs decided to change over to two pop-ups. Well this certainly quietened the rods down, so much that come 11am when we decided to pack away not a single bleep had come my way, the only action was from a pike that grabbed the pop-up when winding in. Ted and Chris both had very quiet nights but although the fishing was tough we had a truly memorable session and can’t wait for another invite, hopefully when the fishing has picked up. 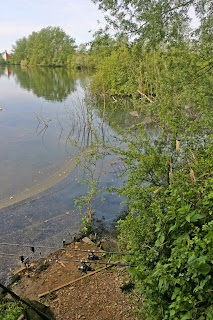 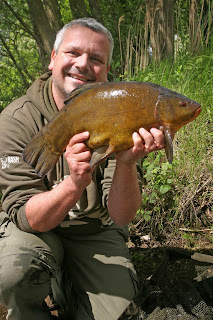 Although I’m almost positive that most of the maggot action was from eels I still cant get my head around why when these spells came I managed to hook tench as well. Were the drop back actually from tench, yet if they were then they wouldn’t have ripped four maggots of the hook, moved a 2.5oz lead without getting hooked. My final conclusion was when the eels decided to feed this in turn attracted the odd tench as well, hence the reason for hooking a couple each time. When the eels stopped the tench stopped, a strange occurrence but strange things do happen.

Another point was why was the fishing so slow? Well over the last two weeks I have been on the receiving end of quite a few hard sessions with just one or two bites forthcoming during a session that I would have expected far more. Its not just myself that’s witnessed this, everyone else, up and down the country seems to be struggling as well. The wind isn’t helping as it seems to be swinging on a daily basis but its not just this, there is certainly some other factor unbeknown to us that’s effecting sport.