Winge of the Week - Inadequate line-clips 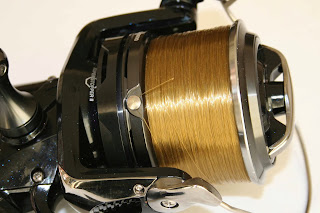 One of the first things that I look at when buying or reviewing a reel is the quality of its line clip. In a day when accuracy seems to be so important between match and specimen anglers I'm amazed that many reel manufactures churn out reels with line clips that, well are just a load of rubbish. I know that most claim that the reels line clip is only their to stop the line unwinding from the spool when not in use and not for use in accuracy casting, yet isn’t it time that when very few anglers actually use it for what its designed to do and many use it as a casting accuracy aid that these manufacturers don’t look more closely to this and actually design a clip for what many like myself are using it for!
I had a nightmare with a certain manufacturers reel a couple of years back, being made to use them it soon became a frustrating experience when the line clip repeatedly let me down. It was a time when I was targeting the rudd at Frensham during the winter, often baiting up after dark and knowing that accuracy was vital in getting results, hearing the ting of the line pinging out of the clip when casting a spod and knowing that a deliverance of maggot and hemp had just overridden the mark by ten yards was just unacceptable. To say I was a happy angler when the dustbin lid was lifted and a dozen or so reels found the bottom of it is an understatement, and to this day the only reels I use are either Shimano or Diawa, two companies that pay extreme attention to detail and just wouldn’t let a reel leave the testing stage if it was unreliable.
So this is a message to all manufacturers that are advertising their reels to be brilliant, take a look at the line clip because if they are not up to scratch for the modern day angler then all you are doing is letting them and yourselves down. And to any angler that’s looking to buy a new reel, steer clear of new reels on the market, especially ones that come from a company with no track record in manufacturing them and keep to, well Shimano and Diawa, companies that take pride in what they offer.