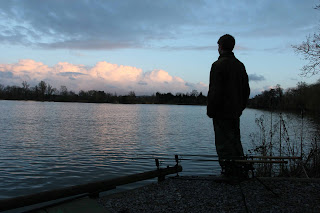 At long last it seems the weathers on the change, yet we still had two hard frosts over the weekend.

Monday morning I headed to a venue that I have never really got on with, Lodge Pond with the view of producing an Anglers Mail Action Replay feature based on the new Nash Ballmaker. Let’s just say it was a success with around 45lb of quality bream finding the bottom of my landing net in just a few hours. Keep an eye out for the feature; it will be in Anglers Mail very soon.

Tuesday dawned wet but with a Tight Lines film crew booked I had to get the wet weather gear on and head of in the hope of an early season tench. Heading for Bagshot Lea Big Pond I dropped into a favourite swim and soon after casting out a helicopter rig baited with double maggot received a bite. I was expecting the flood gates to open as conditions were far milder than of late, yet something wasn’t right as over the next six hours or so I struggled for just three more bream. The programme can be seen this Friday, the 19th on Sky Sports 3 at 7pm where I will also be a guest.

Wednesday I spent the morning drying clothes, cleaning and preparing the bream tackle for an overnight session. The forecast was for rain again, coming in at 5pm and fading away come 1am. Heading south earlier than normal I found myself rushing to get everything sorted as the rain had arrived an hour earlier than expected. The rain was relentless and as darkness fell the wind increased. It was one of those evenings you question your sanity. At 1am an alarm finally sounded and with the wind easing I hoped that this was the start of things to come yet it was my only bite of the night. The rain did finally stop at 4am and come 7am I was packing up, wet once again but with a 10lb 9oz bream to show for my efforts.

Thursday morning was repeat performance of Wednesday, drying, cleaning and preparing kit for another overnighter, yet the target species tonight was to be catfish. Young Jake was joining me, however apart from one aborted take just into darkness the night passed uneventfully, well apart from my oval taking off and myself getting wet again as the heavens decided to open at 1am. 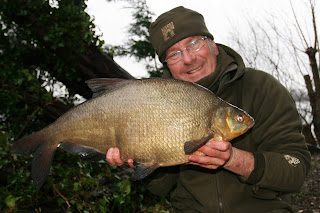 Friday morning was once again spent drying of and getting the tackle ready for yet another overnighter, this time the target species was tench and it was my first session of a new campaign. Arriving at 5pm with my fishing partner Chris we spent a couple of hours baiting and setting up, yet it was to be another quite night with just the odd liner occurring. We had said before leaving that a bite, let alone a tench would be a result as this session was all about getting to know how the venue ticks and refining tactics. Let’s just say we learned loads and the maggot approach has had to be abandoned as the lake is crawling with small rudd.
As you can see its been a hectic week, with loads of effort and time spent bankside, yet results have been poor, the reason is that the water temperature is still cold, however with temperatures rising I think everything will be kicking off very soon.
Posted by Unknown at 03:37