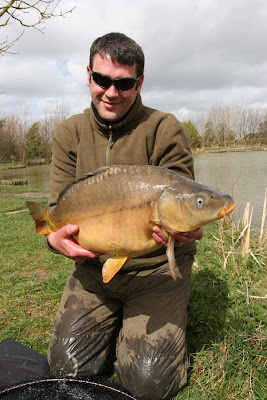 With the rain clouds building on Saturday morning and not wanting to get wet again I quickly packed the tackle up at 8am after a blank. It was the first tench session of the year, on a new lake, yet with plenty learnt and tactics having to be rethought I returned home happy. The weather stayed dry for a few hours and I managed to dry things off before sorting the kit out once again for a technical session on another tench venue for a customer on Sunday.
The weather was far better come Sunday and with the temperature constant over the last few days felt confident of some action. After a quick walk around we found out that a few tench were beginning to show to the carp anglers and finally settled in a swim favoured by tench anglers. After a few minutes explaining the art of feature finding and spodding some bait out we cast out a couple of rods on my favoured Helicopter set up with maggot on the hook. Casting every hour as well as placing another rod in the margins the tench were obviously still yet to wake up as we tried everything to gain a bite, yet come 5pm we decided to call it a day and return in a week’s time for revenge.
Having spent so many hours on the bank last week, Monday had to be spent catching up on paper work and that’s exactly what the day was spent doing. 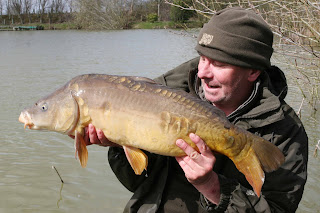 It was another early morning come Tuesday as a guiding session had been planned for perch months ago. My customer arrived at my house at 6am and we headed to a local three lake commercial. Come lunchtime though all that had been caught between us was wild carp and quality roach, plus one tiny perch that at least told us they were still in the venue. Our thoughts were that we were too late and the perch had other things on their minds so we made a move to the complex’s specimen lake, again hoping for a big perch. It wasn’t long before Alan was bent into his first carp and that set the scene for the rest of the day as between us we must have netted another twenty carp ranging from 9lb – 16lb. Brilliant fun but it was the loss of a very big common that hung on my mind, a fish that finally shed the hook after a 45minute battle! A few good tench also showed to prove that the water is warming up and by 7pm we were both knackered after catching what had to be getting on for 300lb of fish.
Back at home it was a rush to get the camera kit sorted as the following day I was heading to the Tring Complex to complete a feature for Nash Peg One. It was another windy day yet come 2pm we had the feature sown up and I managed to get back home before the rush hour. 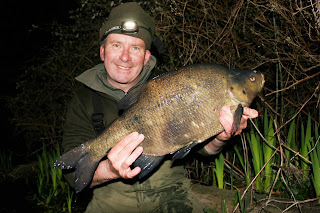 I was torn in two minds on Thursday whether to target bream or tench overnight yet having bought a ticket on a new lake with tench in mind and working with another angler to suss the venue out I did the right thing and targeted tench. With three rods, all fishing boilies in one way or another I settled back to see what was in stall for me and come the morning I had my first proper bite, yet it didn’t have red eyes and green sides and although the right size was unfortunately a bream weighing 9lb 2oz. Knowing that the venue holds very few bream, I have to take a positive away from the session that if we can catch bream, then the tench will follow.
Friday was spent tidying and drying the kit, sorting it out for another tench session early Saturday morning with a customer before preparing some items of interest and heading to Isleworth for a live appearance on Tight Lines.